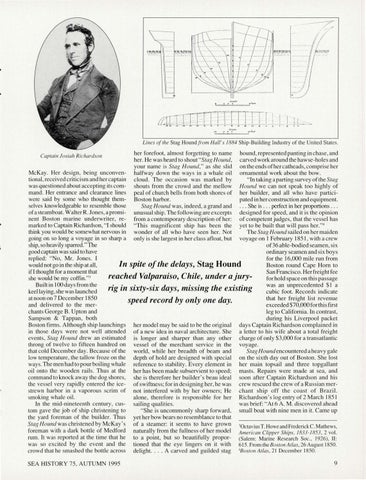 Lines of the Stag HoundjiÂˇom Hall' s 1884 Ship-Building Industry of the United States.

her forefoot , almost forgett ing to name her. He was heard to shout "Stag Hound, your name is Stag Hound," as she slid halfway down the ways in a wha le oil cloud. The occasion was marked by shouts from the crowd and the mellow peal of church bells from both shores of Boston harbor. Stag Hound was, indeed, a grand and unusual ship. The following are excerpts from a contemporary description of her: "This magnificent ship has been the wonder of all who have seen her. Not on ly is she largest in her cl ass afloat, but

hound , represented panting in chase, and carved work around the hawse-holes and on the ends ofhercatheads, comprise her McKay. Her design, being unconvenornamental work about the bow. tional, received criticism and her captain "In taking a parting survey of the Stag was questioned about accepting its comHound we can not speak too highly of mand. Her entrance and clearance lines her builder, and all who have particiwere said by some who thought thempated in her construction and equipment. selves knowledgeable to resemble those ... She is ... perfect in her proportions . .. ofa steam boat.Walter R. Jones, a prom idesigned for speed, and it is the opinion nent Boston marine underwriter, reof competent judges, that the vessel has marked to Captain Richardson, "I should yet to be built that will pass her. " 4 think you wou ld be somewhat nervous in The Stag Hound sailed on her maiden going on so long a voyage in so sharp a voyage on I February 1851 , with a crew ship, so heavily sparred."The of36 able-bodied seamen, six good captain was said to have ordinary seamen and six boys replied : "No, Mr. Jones. I for the 16,000 mile run from In spite of the delays, Stag Hound would not go in the ship at all, Boston round Cape Horn to if I thought for a moment that San Francisco. Herfreightfee reached Valparaiso, Chile, under a juryshe would be my coffin."3 for hold space on this passage Builtin IOOdaysfromthe was an unprecedented $I a rig in sixty-six days, missing the existing keel laying, she was launched cubic foot. Records indicate at noon on 7 December 1850 that her freight list revenue speed record by only one day. and delivered to the merexceeded $70,000 for this first chants George B. Upton and leg to California. In contrast, Sampson & Tappan, both during his Liverpool packet Boston firms. Although ship launchings her model may be said to be the original days Captain Richardson complained in in those days were not well attended of a new idea in naval architecture. She a letter to his wife about a total freight events, Stag Hound drew an estimated is longer and sharper than any other charge of only $3,000 for a transatlantic throng of twelve to fifteen hundred on vessel of the merchant service in the voyage. that cold December day. Because of the world , while her breadth of beam and Stag Hound encountered a heavy gale low temperature, the tallow froze on the depth of hold are designed with special on the sixth day out of Boston. She lost ways. The men had to pour boiling whale reference to stability. Every element in her main topsail and three topgallant oil onto the wooden rails. Thus at the her has been made subservient to speed; masts . Repairs were made at sea, and command to knock away the dog shores, she is therefore her builder's beau ideal soon after Captain Richardson and his the vessel very rapidly entered the ice- of swiftness; for in designing her, he was crew rescued the crew of a Russian merstrewn harbor in a vaporous scrim of not interfered with by her owners; He chant sh ip off the coast of Brazi I. smoking whale oil. alone, therefore is responsible for her Richardson 's log entry of 2 March 1851 In the mid-nineteenth century , cus- sa iling qualities. was brief: "At 6 A. M . discovered ahead tom gave the job of ship chri stening to "She is uncommonly sharp forward, small boat with nine men in it. Came up the yard foreman of the builder. Thus yet her bow bears no resemblance to that Stag Hound was christened by McKay 's of a steamer: it seems to have grown 30 ctavius T. Howe and Frederick C. Mathews, foreman with a dark bottle of Medford naturally from the fullness of her model American Clipper Ships, 1833-1853 , 2 vol. rum . It was reported at the time that he to a point, but so beautifully propor- (Salem: Marine Research Soc., 1926), II: was so excited by the event and the tioned that the eye lingers on it with 615. From the Boston Atlas, 26 August 1850. crowd that he smashed the bottle across delight. ... A carved and guilded stag 4 Boston Atlas, 21 December 1850. Captain Josiah Richardson