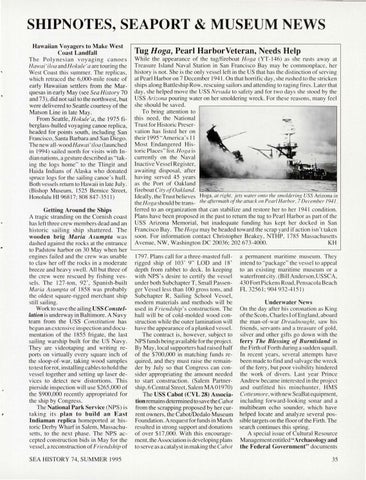 SHIPNOTES, SEAPORT &amp; MUSEUM NEWS Hawaiian Voyagers to Make West Coast Landfall The Polynesian voyaging canoes Hawai &#39;iloa andHokule&#39;a are touring the West Coast this summer. The replicas, wh ich retraced the 6,000-mile route of early Hawaiian settlers from the Marquesas in earl y May (see Sea History 70 and 73), did not sai l to the northwest, but were delivered to Seattle courtesy of the Matson Line in late May. From Seattle, H okule &#39;a, the 197 5 fiberglass-hulled voyaging canoe replica, headed for points south , including San Francisco, Santa Barbara and San Diego. The new al I-wood H awa i &#39;iloa (launched in 1994) sailed north for visits with In dian nations, a gesture described as &quot;taking the logs home&quot; to the Tlingit and Haida Indi ans of Alaska who donated spruce logs for the sailing canoe&#39;s hull. Both vessels return to Hawaii in late July. (B ishop Museum, 1525 Bernice Street, Honolulu HI 968 17; 808 847-35 11 ) Getting Around the Ships A tragic stranding on the Comi sh coast has left three crew members dead and an hi stori c sa ilin g ship sha tte red. The wooden brig Maria Asumpta was dashed aga in st the rocks at the entrance to Padstow harbor on 30 May when her engines failed and the crew was unabl e to claw her off the rocks in a moderate breeze and heavy swell. All but three of the crew were rescued by fishing vesse ls. The 127-ton, 92 &#39;, Spanish-built Maria Asumpta of 1858 was probably the oldest sq uare-rigged merchant ship still sailing. Work to save the ailing USS Constellation is underway in Baltimore. A Navy team from the USS Constitution has begun an extensive inspection and docu mentation of the 1855 frigate, the last sailing warship built for the US Navy. They are videotaping and writing reports on virtually every sq uare inch of the sloop-of-war, taking wood samples to test for rot, installing cables to hold the vessel together and setting up laser devices to detect new distortions. This pierside inspection will use $265,000 of the $900,000 recentl y appropriated for the ship by Congress. The National Park Service (NPS) is taking its plan to build an East lndiaman replica homeported at hi storic Derby Wharf in Salem, Massachusetts, to the next phase. The NPS accepted construction bids in May for the vessel, a reconstruction of Friendship of SEA HISTORY 74, SUMMER 1995

Tug Hoga, Pearl HarborVeteran, Needs Help While the ap pearance of the tug/fireboat Hoga (YT- 146) as she rusts away at Treasure Island Naval Station in San Francisco Bay may be com monpl ace, her hi story is not. She is the only vessel left in the US that has the distinction of serving at Pearl Harbor on 7 December 1941. On that horrific day , she rushed to the stricken ships along Battleship Row , rescuing sailors and attending to raging fires. Later that day, she helped move the USS Nevada to safety and for two days she stood by the USS Arizona pouring water on her smoldering wreck. For these reasons , many fee l she should be saved. To bring attention to this need, the National Trust for Hi storic Preser. &#39; &#39; ·&#39; vation has li sted her on their 1995 &quot; America &#39; s 11 Most Endangered Historic Places&quot; li st. H oga is currentl y on the Naval Inactive Vessel Reg iste r, !t &#39; ...... awaiting disposal, after ..... .. ~&#39; . ~ . having served 45 years as the Port of Oakland ---r ~ fireboat C ity o.f&#39;Oak!and. -. - &quot;&#39; - -- Ideal ly , the Trust believes Hoga, at right , )els water onlo the smoldering USS Arizona in the H oga should be trans- the aftermath of the a/lack on Pearl Harbor, 7 December 1941 . ferred to an organization that can stabili ze and restore her to her 1941 condition. Plans have been proposed in the past to return the tug to Pearl Harbor as part of the USS Arizona Memorial, but inadequate funding has kept her docked in San Francisco Bay. The Hoga may be headed toward the scrap yard if action isn &#39; t taken soon. For information contact Chri stopher Beakey, NTHP, 1785 Massachu setts Avenue, NW, Washington DC 20036; 202 673-4000. KH

1797. Plans ca ll for a three-masted fullrigged ship of 103&#39; 9&quot; LOD and 18 &#39; depth from rabbet to deck. In keeping with NPS &#39; s desire to certify the vesse l under both Subchapter T , Sm alI Passenger Vessel less than I 00 gross tons, and Subchapter R, Sailing School Vessel, modern material s and methods will be used in Friendship&#39;s construction. The hull will be of co ld-molded wood construction while the outer lamination will have the appearance of a planked vessel. The contract is, however, subject to NPS funds being available forthe project. By May, local supporters had raised half of the $700,000 in matching funds required, and they must raise the remainder by July so that Congress can consider appropriating the amount needed to start construction. (Sa lem Partnership, 6 Central Street, Salem MA 01970) The USS Cabot (CVL 28) Association remains determined to save the Cabot from the scrapping proposed by her current owners, the Cabot/Dedalo Muse um Foundation. A request for fund s in March resulted in strong support and donations of over $ 17,000. With thi s encouragement, the Association is developing plans to serve as a catalyst in making the Cabot

a permanent mant1me museum. They intend to &quot;package&quot; the vesse l to appea l to an ex isting maritime museum or a waterfront city. (Bi ll Anderson,USSCA, 430 Fort Pickens Road, Pensacola Beach FL 3256 1; 904 932-4 15 1) Underwater News On the day after hi s coronation as King of the Scots, Charles I of Eng land , aboard the man-of-war Dreadnought, saw hi s friends, servants and a treasure of go ld, si lver and other g ifts go down with the ferry The Blessing of Burntisland in the Firth of Forth during a sudden sq uall. In recent years, several attempts have been made to find and sa lvage the wreck of the ferry , but poor visibi lity hindered the work of divers. Last year Prince Andrew became interested in the project and outfitted hi s minehunter, HMS Collesmore , with new SeaBatequipment, inc luding forward-looking sonar and a multibeam echo sounder, which have he lped locate and analyze severa l possibl e targets on the floorof the Firth. The search continues this spring. A spec ial issue of C ultural Resource Management enti tied&quot; Archaeology and the Federal Government&quot; documents 35