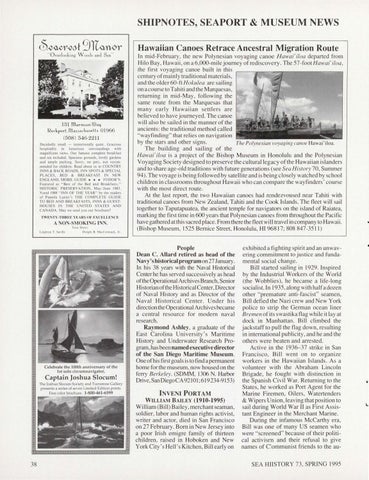 Featured as &quot; Best of the Bed and Brea kfasts.&quot;

CANA DA . May we send you our brochure? TWEN TY-THREE

A NON-SMOKING INN. Your Hos1s:

In mid-February, the new Polynesian voyaging canoe Ha wai&#39; i/oa departed from Hilo Bay, Hawaii , on a 6,000-mile journey of redi scovery . The 57-footHawai&#39; iloa, the first voyaging canoe built in this century of mainly traditional materials, and the older 60-ft Hoku/ea are sailing on a course to Tahiti and the Marquesas , returning in mid-May, following the same route from the Marquesas that many early Hawaiian settlers are believed to have journeyed. The canoe will also be sailed in the manner of the ancients: the traditional method called &quot; wayfinding&quot; that relies on navigation Th e Polynesian voyaging canoe Hawai &#39; iloa. by the stars and other signs. The building and sa iling of the Hawai&#39; i/oa is a project of the Bishop Museum in Honolulu and the Polynesian Voyaging Society designed to preserve the cu ltural legacy of the Hawaiian islanders and to share age-old traditions with future generations (see Sea History 70, Summer 94). The voyage is being followed by satellite and is being closely watched by school children in classrooms throughout Hawaii who can compare the wayfinders&#39; course with the most direct route. At the last report, the two Hawaiian canoes had rendezvoused near Tahiti with traditional canoes from New Zealand, Tahiti and the Cook Islands. The fleet will sail together to Taputapuatea, the ancient temple for navigators on the island of Raiatea, marking the first time in 600 years that Polynesian canoes from throughout the Pacific have gathered at this sacred place. From there the fleet wi 11 travel in company to Hawaii. (Bishop Museum, 1525 Bernice Street, Honolulu , HI 96817; 808 847-3511)

People Dean C. Allard retired as head of the Navy&#39;shistorical program on 27 January. In his 38 years with the Naval Historical Center he has served successively as head oftheOperationalArchivesBranch,Senior Historian of the Historical Center, Director of Naval History and as Director of the Naval Historical Center. Under his direction the Operational Archives became a central resource for modern naval research. Raymond Ashley , a graduate of the East Carolina University &#39;s Maritime History and Underwater Research Program, has been named executive director of the San Diego Maritime Museum . Oneofhis first goals is to find a pennanent home for the museum , now housed on the ferry Berkeley. (SDMM, 1306 N. Harbor Drive, San Diego CA 9210 I ; 619234-9153) INVENI PORT AM (1910-1995) William (Bill) Bailey, merchant seaman, soldier, labor and human rights activist, writer and actor, died in San Francisco on 27 February. Born in New Jersey into a poor Iri sh emigre family of thirteen children, raised in Hoboken and New York City &#39;s Hell &#39;s Kitchen , Bill early on WILLIAM BAILEY

exhibited a fighting spirit and an unwavering commitment to justice and fundamental soc ial change. Bill started sailing in 1929. Inspired by the Industrial Workers of the World (the Wobblies) , he became a life-long socialist. In 1935, along with half a dozen other &quot; premature anti-fascist&quot; seamen , Bill defied the Nazi crew and New York police to strip the Gennan ocean liner Bremen of its swastika flag while it lay at dock in Manhattan. Bill climbed the jackstaff to pull the flag down , resulting in international publicity , and he and the others were beaten and arrested. Active in the 1936-37 strike in San Franci sco, Bill went on to organize workers in the Hawaiian Islands. As a volunteer with the Abraham Lincoln Brigade, he fought with distinction in the Spanish Civil War. Returning to the States, he worked as Port Agent for the Marine Firemen, Oilers, Watertenders &amp; Wipers Union , leav ing that position to sail during World War II as First Assistant Engineer in the Merchant Marine. During the infamous McCarthy era, Bill was one of many US seamen who were &quot;screened&quot; because of their political activism and their refusal to give names of Communist friends to the auSEA HIISTORY 73 , SPRING 1995