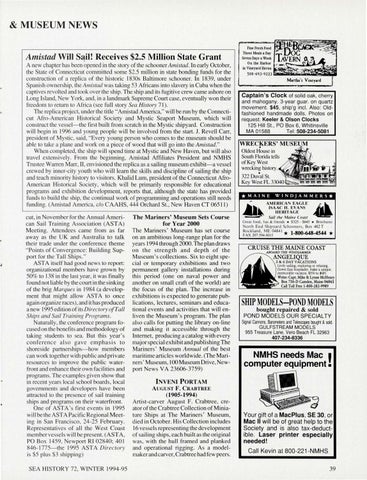 A new chapter has been opened in the story of the schooner Amis tad. In early October, the State of Connecticut committed some $2.5 million in state bonding funds for the construction of a replica of the historic 1830s Baltimore schooner. In 1839, under Spanish ownership, theAmistad was taking 53 Africans into slavery in Cuba when the captives revolted and took over the ship. The ship and its fugitive crew came ashore on Long Island, New York, and, in a landmark Supreme Court case, eventuaJly won their freedom to return to Africa (see full story Sea History 71). The replica project, under the title " Amistad America," will be run by the Connecticut Afro-American Historical Society and Mystic Seaport M useum, which will construct the vessel-the first built from scratch in the Mystic shipyard. Construction will begin in 1996 and young people will be involved from the start. J. Revell Carr, president of Mystic, said, "Every young person who comes to the museum should be able to take a plane and work on a piece of wood that will go into the Amistad." When completed, the ship will spend time at Mystic and New Haven, but will also travel extensively. From the beginning, Amistad Affiliates President and NMHS Trustee Warren Marr, II, envisioned the replica as a sailing museum exhibit-a vessel crewed by inner-city youth who will learn the skills and discipline of sailing the ship and teach minority history to visitors. Khalid Lum, president of the Connecticut AfroAmerican Historical Society, which will be primariJy responsible for educationaJ programs and exhibition development, reports that, aJthough the state has provided funds to build the ship, the continual work of programming and operations still needs funding . (Amistad America, c/o CAAHS, 444 Orchard St., New Haven CT 06511) cut, in November for the Annua l American Sail Training Association (AST A) Meeting. Attendees came from as far away as the UK and Australia to talk their trade under the conference theme " Points of Convergence: Building Support for the Tall Ships." AST A itself had good news to report: organizational members have grown by 50% to 138 in the last year, it was finally found not liable by the court in the sinking of the brig Marques in 1984 (a development that might allow AST A to once again organize races), and it has produced a new 1995 edition of its Directory ofTall Ships and Sail Training Programs. Naturally, the conference program focused on the benefits and methodology of taking students to sea. But this year's conference also gave emphasis to shoreside partnerships-how members can work together with public and private resources to improve the public waterfront and enhance their own facilities and programs. The examples given show that in recent years local school boards, local governments and developers have been attracted to the presence of sail training ships and programs on their waterfront. One of AST A's first events in 1995 will be the AST A Pacific Regional Meeting in San Francisco, 24-25 February. Representatives of all the West Coast member vessels will be present. (ASTA, PO Box 1459, Newport RI 02840; 401 846- 1775- the 1995 AST A Directory is $5 plus $3 shipping) SEA HISTORY 72, WINTER 1994-95

The Mariners' Museum Sets Course for Year 2000 The Mariners ' Museum has set course on an ambiti ous long-range plan for the years 1994 through 2000. The plan draws on the strength and depth of the Museum's collections. Six to eight special or temporary exhibitions and two permanent gallery installations during this period (one on naval power and another on small craft of the world) are the focus of the plan. The increase in exhibitions is expected to generate publications , lectures, seminars and educationa l events and activities that wi ll enliven the Museum's program. The plan also calls for putting the library on-line and making it accessible through the Internet, producing a catalog with every major special exhibit and publishing The Mariners' Museum Annual of the best maritime articles worldwide. (The Mariners' Museum, I 00 Museum Drive, Newport News VA 23606-3759)

(1905-1994) Artist-carver August F. Crabtree, creator of the Crabtree Collection of Miniature Ships at The Mariners ' Museum , died in October. His Collection includes 16 vessels representing the development of sai ling ships, each built as the original was, with the hull framed and planked and operational rigging. As a modelmaker and carver, Crabtree had few peers.

Your gift of a MacPlus, SE 30, or Mac II will be of great help to the Society and is also tax-deductible . Laser printer especially needed! Call Kevin at 800-221-NMHS 39