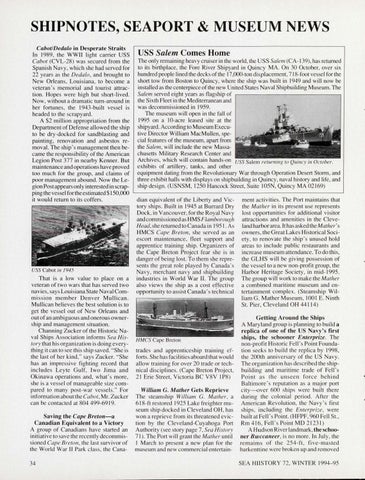 SHIPNOTES, SEAPORT &amp; MUSEUM NEWS Cabot/Dedalo in Desperate Straits In 1989, the WWII light carrier USS Cabot (CVL-28) was secured from the Spanish Navy, which she had served for 22 years as the Dedalo, and brought to New Orleans, Louisiana, to become a veteran &#39; s memorial and touri st attraction . Hopes were high but short-lived. Now, without a dramatic turn-around in her fortunes, the 1943-built vessel is headed to the scrapyard. A $2 million appropriation from the Department of Defense allowed the ship to be dry-docked for sandblasting and painting, renovation and asbestos removal. The ship&#39;s management then became the responsibility of the American Legion Post 377 in nearby Kenner. But maintenance and operations have proved too much for the group, and claims of poor management abound. Now the Legion Post appears only interested in scrapping the vessel for the estimated $150,000 it would return to its coffers.

That is a low value to place on a veteran of two wars that has served two navies, says Louisiana State Naval Commi ss ion membe r Denve r Mullican. Mullican believes the best solution is to get the vessel out of New Orleans and out of an ambiguous and onerous ownership and management si tuation . Channing Zucker of the Historic Naval Ships Association informs Sea History that his organization is doing everything it can to see this ship saved. &quot; She is the last of her kind,&quot; says Zucker. &quot;S he has an impress ive fightin g record that includes Leyte Gulf, Iwo Jima and Okinawa operations and, what&#39;s more, she is a vessel of manageable size compared to many post-war vessels.&quot; For information about the Cabot, Mr. Zucker can be contacted at 804 499-6919. Saving the Cape Breton-a Canadian Equivalent to a Victory A group of Canadians have started an initiative to save the recently decommi ssioned Cape Breton, the las t survivor of the World War II Park class , the Cana34

USS Salem Comes Home The only remaining heavy cruiser in the world, the USS Salem (CA- 139), has returned to its birthplace, the Fore Ri ver Shipyard in Quincy MA. On 30 October, over six hundred people lined the decks of the 17,000-ton displacement, 7 18-foot vessel for the short tow from Boston to Quincy, where the sh ip was built in 1949 and will now be installed as the centerpiece of the new United States Naval Shipbuilding Museum. The Salem served eight years as flagship of ~--------------~ the Sixth Fleet in the Mediterranean and was decomm issioned in 1959. The museum will open in the fall of 1995 on a I0-acre leased site at the shipyard. According to Museum Executive Director William MacMullen, special features of the museum , apart from the Salem, will include the new Massachusetts Military Research Center and Archives, which will contain hands-on USS Salem returning to Quincy in October. exhibits of artillery, tanks, and other equipment dating from the Revolutionary War through Operation Desert Storm, and three exhibit halls with displays on shipbuilding in Quincy, naval history and life, and ship design. (USNSM, 1250 Hancock Street, Suite 105N, Quincy MA 02169) dian equivalent of the Liberty and Victory ships. Built in 1945 at Burrard Dry Dock, in Vancouver, for the Royal Navy and commissioned as HMS Flamborough Head, she returned to Canada in 1951. As HMCS Cape Breton, she served as an escort maintenance, fleet support and apprentice training ship. Organizers of the Cape Breton Project fear she is in danger of being lost. To them she represents the great role played by Canada&#39;s Navy, merchant navy and shipbuilding industries in World War II. The group also views the ship as a cost effective opportunity to assist Canada&#39;s technical

trades and apprenticeship training efforts. She has facilities aboard that would allow training for over 20 trade or technical disciplines. (Cape Breton Project, 21 Erie Street, Victoria BC Y8Y 1P8)

William G. Mather Gets Reprieve The steamship William G. Math er, a 618-ft restored 1925 Lake freighter museum ship docked in Cleveland OH , has won a reprieve from its threatened ev iction by the Cleveland-Cuyahoga Port Authority (see story page 7, Sea History 71). The Port will grant the Mather until l March to present a new pl an for the museum and new commercial entertain-

ment activities. The Port maintains that the Mather in its present use represents lost opportunities for additional visitor attractions and amenities in the Cleveland harbor area. It has asked the Mather&#39;s owners, the Great Lakes Hi storical Society, to re novate the ship &#39;s unused hold areas to include public restaurants and increase museum attendance. To do this , the GLHS will be giv ing possession of the vessel to a new non-profit group, the Harbor Heritage Society, in mid-1995 . The group will work to make the Mather a combined maritime museum and en- Âˇ tertainment complex. (Steamship William G. Mather Museum, 1001 E. Ninth St. Pier, Cleveland OH 44114) Getting Around the Ships A Mary land group is planning to build a replica of one of the US Navy&#39;s first ships, the schooner Enterprize. The non-profit Hi storic Fell &#39;s Point Foundation seeks to build the replica by 1998, the 200th anniversary of the US Navy. The organization has described the shipbuilding and maritime trade of Fell&#39;s Point as the unseen force behind Baltimore&#39;s reputation as a major port city--over 600 ships were built there during the colonial period. After the American Revolution , the Navy&#39;s first ships, including the Enterprize, were built at Fell&#39;s Point. (HFPF, 960 Fell St., Rm 416, Fell &#39; s Point MD 2 123 1) A Hudson River landmark, the schooner Bwccaneer, is no more. In July, the remaims of the 254-ft, five-masted barkenttine were broken up and removed SEA HIJSTORY 72, WINTER 1994-95