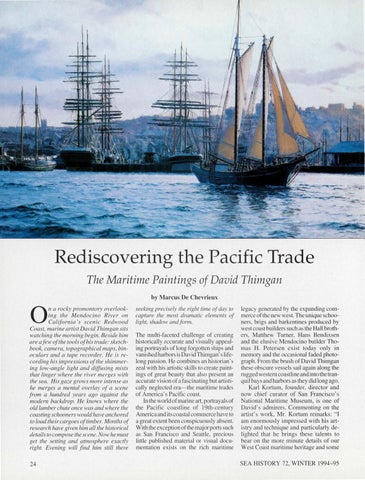 n a rocky promontory overlooking the Mendo cino River on California&#39;s scenic Redwood Coast, marine artist David Thimgan sits watching the morning begin. Beside him are a few ofthe tools of his trade: sketchbook, camera, topographical maps, binoculars and a tape recorder. He is recording his impressions of the shimmering low-angle light and diffiising mists that linger where the river merges with the sea. His gaze grows more intense as he merges a mental overlay of a scene from a hundred years ago against the modern backdrop. He knows where the old lumber chute once was and where the coasting schooners would have anchored to load their cargoes of timber. Months of research have given him all the historical details to compose the scene. Now he must get the setting and atmosphere exactly right. Evening will find him still there 24

seeking precisely the right time of day to capture the most dramatic elements of light, shadow and form. The multi-faceted challenge of creating historically accurate and visually appealing portrayals of long forgotten ships and vanished harbors is David Thimgan &#39;s lifelong passion. He combines an hi storian &#39;s zeal with hi s artistic skills to create paintings of great beauty that also present an accurate vision of a fascinating but artistically neglected era-the maritime trades of America&#39;s Pacific coast. In the world of marine art, portrayals of the Pacific coastline of 19th-century America and its coastal commerce have to a great extent been conspicuous ly absent. With the exception of the major ports such as San Francisco and Seattle, precious little published mate1ial or visual documentation exists on the rich maritime

legacy generated by the expanding commerce of the new west. The unique schooners, brigs and barkentines produced by west coast builders such as the Hall brothers, Matthew Turner, Hans Bendixsen and the elusive Mendocino builder Thomas H. Petersen exist today only in memory and the occasional faded photograph. From the brush of David Thimgan these obscure vessels sail again along the rugged westemcoastlineandintothe tranquil bays and harbors as they did long ago. Karl Kortum , founder, director and now chief curator of San Francisco&#39; s National Maritime Museum, is one of David &#39;s admirers. Commenting on the artist&#39;s work, Mr. Kortum remarks: &quot;I am enormously impressed with his artistry and technique and particularly delighted that he brings these talents to bear on the more minute details of our West Coast maritime heritage and some SEA HISTORY 72, WINTER 1994-95