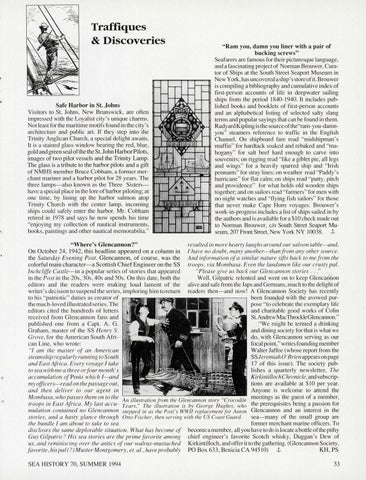 Safe Harbor in St. Johns Visitors to St. Johns, New Brunswick, are often impressed with the Loyalist city ' s unique charms. Not least for the maritime motifs found in the city ' s architecture and public art. If they step into the Trinity Anglican Church, a special delight awaits. It is a stained glass window bearing the red, blue, gold and green seal of the the St. John Harbor Pilots, images of two pilot vessels and the Trinity Lamp. The glass is a tribute to the harbor pilots and a gift ofNMHS member Bruce Cobham , a former merchant mariner and a harbor pilot for 28 years. The three lamps- also known as the Three Sistershave a special place in the lore of harbor pi toting; at one time, by lining up the harbor salmon atop Trinity Church with the center lamp, incoming ships could safely enter the harbor. Mr. Cobham retired in 1978 and says he now spends his time "enjoying my collection of nautical instruments, books, paintings and other nautical memorabilia. "

"Ram you, damn you liner with a pair of bucking screws" Seafarers are famous for their picturesque language, and a fascinating project of Norman Brouwer, Curator of Ships at the South Street Seaport Museum in New York, has uncovered a ship's store of it. Brouwer is compi ling a bibliography and cumulative index of first-person accounts of life in deepwater sailing ships from the period 1840-1940. It includes published books and booklets of first-person accounts and an alphabetical listing of selected salty slang tenns and popular sayings that can be found in them . Rudyard Kipling is the source of the"ram-you-damnyou" steamers reference to traffic in the English Channel. On shipboard fare read " midshipman 's muffin" for hardtack soaked and rebaked and " mahogany'' for salt beef hard enough to carve into souvenirs; on 1igging read " like a giblet pie, all legs and wings" for a heavily sparred ship and "Irish pennants" for stray lines; on weather read "Paddy 's hurricane" for flat calm; on ships read "putty , pitch and providence" for what holds old wooden ships together; and on sailors read "farmers" for men with no night watches and "flying fi sh sailors" for those that never make Cape Hom voyages. Brouwer' s work-in-progress includes a list of ships sailed in by the authors and is available for a$ I 0 check made out to Norman Brouwer, c/o South Street Seaport Museum, 207 Front Street, New York NY 10038. ,!,

"Where's Glencannon?" resulted in more hearty laughs around our saloon table-and, On October 24, 1942, this headline appeared on a column in I have no doubt , many another--thanfrom any other source. the Saturday Evening Post. Glencannon, of course, was the And information of a similar nature sijis back to me jiÂˇom the colorful main character-a Scottish Chief Engineer on the SS troops, via Mombasa. Even the landsmen like our crusty pal. Inchcliffe Castle- in a popular series of stories that appeared "Please give us back our Glencannon stories . . ." . in the Post in the 20s , 30s, 40s and 50s. On this date, both the Well , Gi lpatric relented and went on to keep Glencar.il)on editors and the readers were making loud lament of the alive and safe from theJaps and Germans, much to thedelightof writer' s decision to suspend the series , imploring him to return readers then- and now! A Glencannon Society has recently to his "patriotic" duties as creator of been founiled -with the avowed purpose "to celebrate the exemplary life the much-loved illustrated series. The and charitable good works of Colin editors cited the hundreds of letters received from Glencannon fans and St. Andrew MacThrockleGlencannon." published one from a Capt. A. G. "We might be termed a drinking Graham, master of the SS Henry S. and dining society for that is what we do, with Glencannon serving as our Grove, for the American South Afrifoca l point," writes founding member can Line, who wrote: Walter Jaffee (whose report from the "/ am the master of an American SSJeremiahO' Brien appears on page steamship regularly running to South 17 of this issue). The society puband East Africa. Every voyage I take 1ishes a quarterly newsletter, The to sea with me a three or.four month's accumulation of Posts which I-and Kirkintilloch Chronicle, and subscriptions are avai lable at $10 per year. my officers-read on the passage out, Anyone is welcome to attend the and then deliver to our agent in Mombasa , who passes them on to the An illustrationjiÂˇom the Glencannon story "Crocodile meetings as the guest of a member, troops in East Africa. My last accu- Tears," The illustration is by George Hughes, who the prerequisites being a passion for mulation contained no Glencannon stepped in as the Post's WWII replacement for Anton Glencannon and an interest in the sea-many of the small group are stories, and a hasty glance through Otto Fischer, then serving with the US Coast Guard. fo1mer merchant marine officers. To the bundle I am about to take to sea discloses the same deplorable situation. What has become of become a member, al 1yo u have to do is locate a bottle of the pithy Guy Gilpatric ? His sea stories are the prime favorite among chief engineer's favorite Scotch whisky, Duggan's Dew of us , and reminiscing over the antics of our walrus-mustached Kirkintilloch, and offer it to the gathering. (Glencannon Society, favorite , his pal (?)Muster Montgomery, et. al., have probably PO Box 633, Benicia CA 94510) ,t KH, PS SEA HISTORY 70, SUMMER 1994