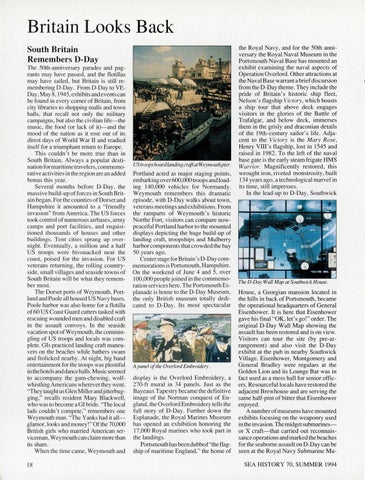 Britain Looks Back South Britain Remembers D-Day The 50th-anniversary parades and pageants may have passed, and the flotillas may have sailed, but Britain is still rememberi ng D-Day. From D-Day to VEDay, May 8, 1945, exhibits and events can be found in every comer of Britain, from city libraries to shopping malls and town hall s, that recall not on ly the military campaigns, but also the civilian life-the music, the food (or lack of it)-and the mood of the nation as it rose out of its direst days of World War II and readied itself for a triumphant return to Europe. This couldn't be more true than in South Britain. Always a popular destination for maritime travelers, commemorative activities in the region are an added bonus thi s year. Several months before D-Day, the mass ive build-up of forces in South Britain began. ForthecountiesofDorsetand Hampshire it amounted to a "friendly invasion " from America. The US forces took control of numerous airbases, army camps and port facilities, and requi sitioned thousands of houses and other buildings. Tent cities sprang up overni ght. Eventually, a million and a half US troops were bivouacked near the coast, poi sed for the invasion. For US veterans returning, the rolling countryside, small villages and seaside towns of South Britain will be what they remember most. The Dorset ports of Weymouth, Portland and Poole all housed US Navy bases. Poole harbor was also home for a flotilla of 60 US Coast Guard cutters tasked with . rescuing wounded men and disabled craft in the assault convoys. In the seaside vacation spot of Weymouth, the commingling of US troops and locals was complete. Gis practiced landing craft maneuvers on the beaches while bathers swam and frolicked nearby. At night, big band entertainment for the troops was plentiful in the hotels and dance halls. Music seemed to accompany the gum-chewing, wolfwhistling Americans whereverthey went. "They taught us Glen Miller and jitterbugging," recalls resident Mary Blackwell , who was to become a GI bride. "The local lads couldn ' t compete," remembers one Weymouth man . "The Yanks had it allglamor, looks and money! " Of the 70,000 British girls who married American serviceman, Weymouth can claim more than its share. When the time came, Weymouth and 18

Portland acted as major stagi ng points, embarking over600,000 troops and loading 140,000 vehicles for Normandy. Weymouth remembers thi s dramatic episode, with D-Day walks abo ut town , veterans meetings and exhibitions. From the ramparts of Weymouth 's historic Northe Fort, visitors can compare nowpeaceful Portland harbor to the mounted displays depicting the huge build-up of land ing craft, troopships and Mulberry harbor components that crowded the bay 50 years ago. Center stage for Britain 's D-Daycommemorations is Portsmouth , Hampshire. On the weekend of June 4 and 5, over 100,000 people joined in the commemoration services here. The Portsmouth Esplanade is home to the D-Day Museum, the only British museum totally dedicated to D-Day. Its most spectacular

A panel of the Overlord Embroide1y.

display is the Overlord Embroidery, a 270-ft mural in 34 panels. Just as the Bayeaux Tapestry became the definitive image of the Norman conquest of England, the Overlord Embroidery tells the full story of D-Day. Further down the Esplanade, the Royal Marines Museum has opened an exhibition honoring the 17 ,000 Royal marines who took part in the landings. Portsmouth has been dubbed "the flagship of maritime England," the home of

the Royal Navy, and for the 50th anniversary the Royal Naval Museum in the Portsmouth Naval Base has mounted an exhibit examini ng the naval aspects of Operation Overlord. Other attractions at the Naval Base warrant a brief discursion from the D-Day theme. They include the pride of Britain 's historic ship fleet, Nelson 's flagship Victory, which boasts a sh ip tour that above deck engages visitors in the glories of the Battle of Trafalgar, and below deck, immerses them in the grisly and draconian details of the 19th-century sailor' s life. Adjacent to the Victory is the Mary Rose, Henry VIII's flagship , lost in 1545 and raised in 1982. To the left of the naval base gate is the early steam frigate HMS Warrior. Magnificently restored, this wrought iron , riveted monstrosity, built 134 years ago, a technological marvel in its time, still impresses. In the lead-up to D-Day, Southwick

House, a Georgian mansion located in the hills in back of Portsmouth, became the operational headquarters of General Eisenhower. It is here that Eisenhower gave his final "OK, let's go!" order. The original D-Day Wall Map showing the assault has been restored and is on view. Visitors can tour the site (by pre-arrangement) and also visit the D-Day exhibit at the pub in nearby Southwick Village. Eisenhower, Montgomery and General Bradley were regulars at the Golden Lion and its Lounge Bar was in fact used as a mess hall for senior officers. Resourceful locals have restored the adjacent Brewhouse and are serving the same half-pint of bitter that Eisenhower enjoyed. A number of museums have mounted exhibits focusing on the weaponry used in the invasion. The midgetsubmarinesor X craft-that carried out reconnaissance operations and marked the beaches for the seaborne assault on D-Day can be seen at the Royal Navy Submarine MuSEA HISTORY 70, SUMMER 1994