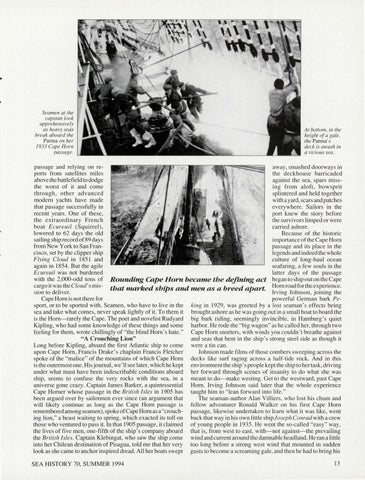 Seamen at the capstan look apprehensively as heavy seas break aboard the Parma on her 1933 Cape Horn passage.

At bottom, in the height of a gale, the Panna's deck is awash in a vicious sea.

passage and relying on reaway, smashed doorways in ports from satellites miles the deckhouse barricaded above the battlefield to dodge agai nst the sea, spars missthe worst of it and come ing from aloft, bow sprit throu gh, other advanced splintered and held together modern yachts have made with a yard, scars and patches that passage successfull y in everywhere. Sailors in the recent years. One of these, port knew the story before the extraordinary French the survivors limped or were boat Ecureuil (Squirrel), carried ashore. lowered to 62 days the old Because of the hi storic sailing ship record of89 days importance of the Cape Hom â&#x20AC;˘ from New York to San Franpassage and its place in the cisco, set by the clipper ship legends and indeed the whole Flying Cloud in 1851 and cu lture of long-haul ocean again in 1854. But the agile seafaring, a few soul s in the Ecureuil was not burdened latter days of the passage with the 2,000-odd tons of Rounding Cape Horn became the defining act began to ship out on the Cape cargo it was the Cloud' s misHorn road for the experience. that marked ships and men as a breed apart. Irving sion to deli ver. Johnson, joining the Cape Horn is not there for powerful German bark Pesport, or to be sported with. Seamen, who have to live in the king in 1929, was greeted by a lost seaman 's effects being sea and take what comes, never speak li ghtly of it. To them it brought ashore as he was goi ng out in a small boat to board the is the Horn-rarely the Cape. The poet and novelist Rudyard big bark riding, seemingly invincible, in Hamburg's quiet Kipling, who had some knowledge of these things and some harbor. He rode the " bi g wagon" as he called her, through two feeling fo r them, wrote chillingly of"the blind Horn 's hate." Cape Horn snorters, with winds you couldn 't breathe against and seas that bent in the ship 's strong steel si de as though it "A Crouching Lion" Long before Kipling, aboard the first Atlantic ship to come were a tin can. upon Cape Horn, Francis Drake 's chaplain Francis Fletcher Johnson made films of those combers sweeping across the spoke of the "malice" of the mountains of which Cape Horn decks like surf ragi ng across a half-tide rock. And in this is the outermost one. His journal, we ' II see later, which he kept environment the ship 's people kept the ship to hertask, driving under what must have been indescribable conditions aboard her forward through scenes of insanity to do what she was ship, seems to confuse the very rocks with the sea, in a meant to do-make westing. Get to the westward, past Cape universe gone crazy. Captain James Barker, a quintessential Horn. Irving Johnson said later that the whole experience Cape Horner whose passage in the British Isles in 1905 has taught him to "lean forward into life." The seaman-author Alan Villiers, who lost his chum and been argued over by sai lormen ever since (an argument that will likely continue as long as the Cape Horn passage is fellow adventurer Ronald Walker on hi s first Cape Horn remembered among seamen), spoke of Cape Horn as a "crouch- passage, likew ise undertaken to learn what it was like, went ing lion," a beast waiting to spring, which exacted its toll on back that way in hi s own littl e shiploseph Conrad with a crew those who ventured to pass it. In that 1905 passage, it claimed of young people in 1935. He went the so-called "easy" way, the lives of five men, one-fifth of the ship' s company aboard that is, from west to east, with-not agai nst-the prevailing the British Isles. Captain Klebingat, who saw the ship come wind and current aro und the damnable headland. He ran a little into her Chilean destination of Pisagua, told me that her very too long before a strong west wind that mounted in sudden look as she came to anchor inspired dread. All her boats swept gusts to become a screami ng gale, and then he had to bring his