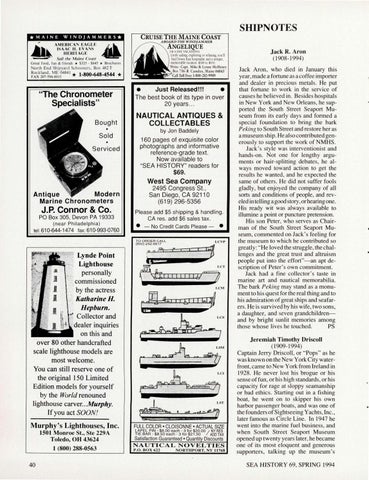 Lynde Point - · ., Lighthouse personally ~ · commissioned by the actress Katharine H. Hepburn. j~ :: Collector and \\\4 - dealer inquiries on this and over 80 other handcrafted scale lighthouse models are most welcome. You can still reserve one of the original 150 Limited Edition models for yourself by the World renouned lighthouse carver.. .Murphy. If you act SOON!

Jack R. Aron (l 908-1994) Jack Aron, who died in January this year, made a fortune as a coffee importer and dealer in precious metals. He put that fortune to work in the service of causes he believed in. Besides hospitals in New York and New Orleans, he supported the South Street Seaport Museum from its early days and formed a special foundation to bring the bark Peking to South Street and restore her as a museum ship. He also contributed generously to support the work of NMHS. Jack &#39;s style was interventionist and hands-on. Not one for lengthy arguments or hair-splitting debates , he always moved toward action to get the results he wanted, and he expected the same of others. He did not suffer fools gladly, but enjoyed the company of all sorts and conditions of people, and reveled in telling a good story, or hearing one. His ready wit was always available to illumine a point or puncture pretension. Hi s son Peter, who serves as Chairman of the South Street Seaport Museum, commented on Jack&#39;s feeling for the museum to which he contributed so greatly: &quot;He loved the struggle, the challenges and the great trust and altruism people put into the effort&quot;-an apt description of Peter&#39;s own commitment. Jack had a fine collector&#39;s taste in marine art and nautical memorabilia. The bark Peking may stand as a monument to his quest for the real thing and to his admiration of great ships and seafarers. He is survived by his wife, two sons, a daughter, and seven grandchi ldrenand by bright sunlit memories among those whose lives he touched. PS Jeremiah Timothy Driscoll (1909-1994) Captain Jerry Driscoll, or &quot;Pops&quot; as he was known on the New York City waterfront, came to New York from Ireland in 1928. He never lost his brogue or hj s sense of fun, or his high standards, or his capacity for rage at sloppy seamanship or bad ethics. Starting out in a fishing boat, he went on to skipper hi s own harbor passenger boats, and was one of the founders of Sightseeing Yachts, Inc., later famous as Circle Line. In 1947 he went into the marine fuel business, and when South Street Seaport Museum opened up twenty years later, he became one of its most eloquent and generous supporters, talking up the museum&#39;s SEA HISTORY 69, SPRING 1994