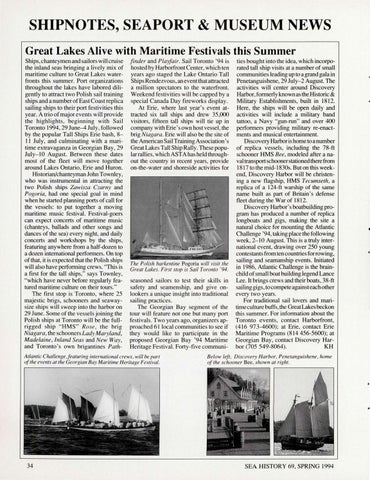 SHIPNOTES, SEAPORT &amp; MUSEUM NEWS Great Lakes Alive with Maritime Festivals this Summer Ships, chanteymen and sailors will cruise the inland seas bringing a lively mix of maritime culture to Great Lakes waterfronts this summer. Port organizations throughout the lakes have labored diligently to attract two Polish sail training ships and a number of East Coast replica sailing ships to their port festivities this year. A trio ofmajorevents will provide the highlights , beginning with Sail Toronto 1994, 29 June-4July, followed by the popular Tall Ships Erie bash, 811 July, and culminating with a maritime extravaganza in Georgian Bay, 29 July-10 August. Between these dates most of the fleet will move together around Lakes Ontario, Erie and Huron. Historian/chanteyman John Townley, who was instrumental in attracting the two Polish ships Zawisza Czarny and Pogoria, had one special goal in mind when he started planning ports of call for the vessels: to put together a moving maritime music festival. Festival-goers can expect concerts of maritime music (chanteys, ballads and other songs and dances of the sea) every night, and daily concerts and workshops by the ships, featuring anywhere from a half-dozen to a dozen international performers. On top of that, it is expected that the Polish ships will also have performing crews. &quot;This is a first for the tall ships,&quot; says Townley, &quot;which have never before regularly featured maritime culture on their tours.&quot; The first stop is Toronto, where 25 majestic brigs, schooners and seawaysize ships will sweep into the harbor on 29 June. Some of the vessels joining the Polish ships at Toronto will be the fullrigged ship &quot;HMS&quot; Rose, the brig Niagara, the schooners Lady Maryland, Madelaine, Inland Seas and New Way, and Toronto &#39;s own brigantines Path-

finder and Play/air. Sail Toronto &#39;94 is hosted by Harborfront Center, which ten years ago staged the Lake Ontario Tall Ships Rendezvous, an event that attracted a million spectators to the waterfront. Weekend festivities will be capped by a special Canada Day fireworks display. At Erie, where last year&#39;s event attracted six tall ships and drew 35,000 visitors, fifteen tall ships will tie up in company with Erie &#39;s own host vessel, the brig Niagara. Erie will also be the site of the American Sail Training Association &#39;s Great Lakes Tall Ship Rally. These popular rallies, which ASTA has held throughout the country in recent years, provide on-the-water and shoreside activities for

The Polish barkentine Pogori a will visit the Great Lakes. First stop is Sail Toronto &#39;94.

seasoned sailors to test their skills in safety and seamenship, and give onlookers a unique insight into traditional sailing practices. The Georgian Bay segment of the tour will feature not one but many port festivals. Two years ago, organizers approached 61 local communities to see if they would like to participate in the proposed Georgian Bay &#39;94 Maritime Heritage Festival. Forty-five communi-

Atlantic Challenge.featuring international crews, will be part of the events at the Georgian Bay Maritime Heritage Festival.

ties bought into the idea, which incorporated tall ship visits at a number of small communities leading up to a grand gala in Penetanguishene, 29 July-2 August. The activities will center around Discovery Harbor, formerly known as the Historic &amp; Military Establishments, built in 1812. Here, the ships will be open daily and activities will include a military band tattoo, a Navy &quot;gun-run&quot; and over 400 performers providing military re-enactments and musical entertainment. Discovery Harbor is home to a number of replica vessels, including the 78-ft schooner HMS Bee, modeled after a naval transport schooner stationed there from 1817 to the mid-1830s. But on this weekend, Discovery Harbor will be christening a new flagship, HMS Tecumseth , a replica of a 124-ft warship of the same name built as part of Britain &#39;s defense fleet during the War of 1812. Discovery Harbor&#39;s boatbuilding program has produced a number of replica longboats and gigs, making the site a natural choice for mounting the Atlantic Challenge &#39;94, taking place the following week, 2-10 August. This is a truly international event, drawing over 250 young contestants from ten countries for rowing, sailing and seamanship events. Initiated in 1986, Atlantic Challenge is the brainchild of small boat building legend Lance Lee. It brings crews and their boats, 38-ft sailing gigs, to compete against each other every two years. For traditional sail lovers and maritirneculture buffs, the Great Lakes beckon this summer. For information about the Toronto events, contact Harborfront, (416 973-4600); at Erie, contact Erie Maritime Programs (814 456-5600); at Georgian Bay, contact Discovery Harbor (705 549-8064). KH

Below left, Discovery Harbor, Penetanguishene, home of the schooner Bee, shown at right.