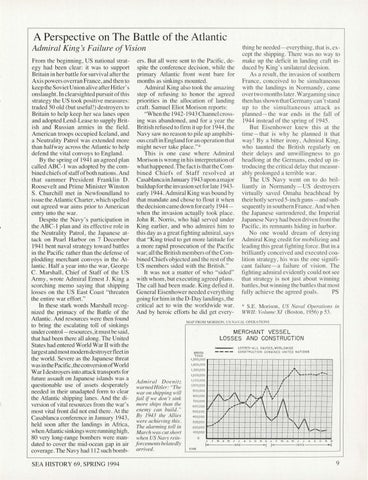 A Perspective on The Battle of the Atlantic Admiral King&#39;s Failure of Vision From the beginning, US national strategy had been clear: it was to support Britain in her battle for survival after the Ax is powers overran France, and then to keep the Sov iet Uni on ali ve after Hi tler&#39;s onslaught.In clearsighted pursuit of thi s strategy the US took positive meas ures: traded 50 o ld (but useful !) destroyers to Britain to help keep her sea lanes open and ado pted Lend-Lease to supply British and Ru ss ian armies in the fi eld . American troops occupied Iceland , and a Neutrality Patrol was extended more than halfway across the Atlantic to help defend the vital convoys to Eng land . By the spring of 1941 an agreed plan ca l led ABC- 1 was adopted by the combined chiefs of staff of both nations. And th at summ er Pre s ide nt Franklin D . Roosevelt and Prime Minister W insto n S. Churc hill met in Newfoundland to iss ue the Atlantic Charter, which spe lled out agreed war aims prior to American e ntry into the war . Despite the Navy &#39; s parti cipation in the ABC- 1 pl an and its effective ro le in the Neutrality Patrol, the Ja panese attack on Pearl Harbor on 7 December 194 1 bent naval strategy toward battles in the Pac ifi c rather than the defense of plodd ing merchant convoys in the Atlantic. Half a year into the war , George C. Marshall , Chief of Staff of the US Army , wrote Admiral Ernest J. King a scorching memo saying that shipp ing losses on the US East Coast &quot; threate n the entire war effort .&quot; In these stark words Marshall recogni zed the primacy of the Battle of the Atlantic. And resources were then fo und to bring the escalating toll of sin kings under control - resources, it must be said, that had been there all along. T he United States had entered World War II with the largest and most modern destroyer fleet in the world . Severe as the Japanese threat was in the Pacific, the conversion of World War I destroyers into attack transports for fu tw·e assault on Japanese islands was a questionable use of assets desperately needed in their unadapted form to clear the Atlantic shipping lanes . And the diversion of vital resources fro m the war &#39; s most vital front did not end there . At the Casablanca conference in January 1943, held soon after the landings in Africa , when Atlantic sinkings were running high, 80 very long-range bombers were mandated to cover the mid-ocean gap in air coverage. The Navy had 11 2 such bombSEA HISTORY 69 , SPRING 1994

thing he needed - everything, that is, except the shipping. There was no way to make up the defi cit in landing craft induced by King&#39;s unil ateral decision. As a result, the in vas ion of southern Fra nce , conce ived to be simul ta neous with the landings in Normand y , came over two months later. W argam ing sinee then has shown that Germany can &#39; t stand up to the s imulta neo us a ttack as planned - the war ends in the fa ll of l 944 instead of the spring of 1945 . But Eisenhower knew thi s at the time - that is why he pl anned it that way! By a bitter irony , Admi ra l King, who taunted the Briti sh regul arl y o n the iL delays and un willingness to go headl ong at the Germans, ended up in troducing the cri tica l delay that measurably prolo nged a terrible war. T he US Navy went on to do bril liantly in Normandy - US destroyers virtually saved Omaha beachhead by their hotl y served 5-inch guns- and subsequentl y in southern Fra nce. And when the Japanese surre ndered , the Imperi al Japanese Navy had been driven fro m the Pacific , its remnants hiding in harbor. No one wo uld dream of de nying Admi ral King cred it for mobili zing and leading thi s great fi ghting force . But in a brilli antly conceived and executed coaliti on strategy , hi s was the one signifi cant fa ilure - a fa ilure of visio n. T he fighting admi ra l ev ide ntl y could not see that strategy is not just about w inning battles, bu t w inning the battles that most PS full y achieve the agreed goal s .

ers. But all were sent to the Pacific, despite the confere nce decision, while the primary Atlantic fro nt went bare for months as sinki ngs moun ted. Admiral King also took the amazing ste p of refusing to honor the agreed priorities in the allocation of landing craft. Samuel Eli ot Mori son reports: &quot; When the 1942- 1943 Channel crossing was abandoned , and for a year the British refu sed to firm it up for 1944 , the Navy saw no reason to pile up amphibi ous craft in England fo r an operation that might never take place.&quot;* Thi s is o ne case whe re Admira l Mori son is wrong in hi s interpretation of what happened . T he fact is that the Combin ed C hi efs of Staff res o lved at Casablanca in January 1943 upon a major buildup forthe in vasion set for late 1943early 1944. Admiral King was bound by that mandate and chose to flout it when the decision came dow n for early 1944 when the in vasion actuall y took place . Jo hn R. Norris, who had served under King earlier , and who ad mires him to thi s day as a great fi ghting adm ira l, says that &quot; King tried to get more latitude for a more rapid prosecution of the Pacific war; all the British me mbers of the Co mbined Chiefs objected and the rest of the US members sided w ith the British.&quot; It was not a matter of who &quot; sided&quot; with whom , but executi ng ag reed plans. T he call had been made. King defi ed it. General Eisenhower needed everything go ing for him in the D-Day landings , the criti cal act to win the worldwide war. And by heroic efforts he d id get everyM AP FROM MOR ISO .US

Admira l Do eni tz warned Hitler: &quot;The war on shipping will fa il if we don &#39;t sink more ships than the enemy can build. &quot; By 1943 the Allies were achieving this. The alarming toll in March was cut short when US Navy reinf orcements belatedly arrived.