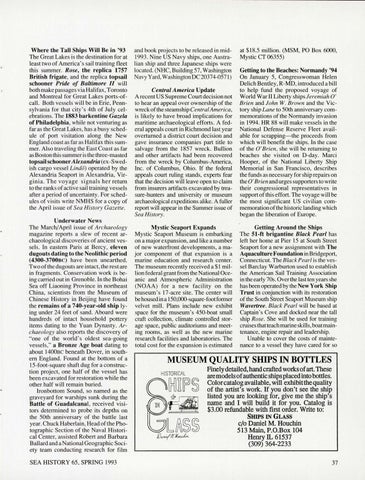 Where the Tall Ships Will Be in &#39;93 The Great Lakes is the destination for at least two of America&#39;s sail training fleet this summer. Rose, the replica 1757 British frigate, and the replica topsail schooner Pride of Baltimore II will both make passages via Halifax, Toronto and Montreal for Great Lakes ports-ofcall. Both vessels will be in Erie, Pennsylvania for that city &#39; s 4th of July celebrations. The 1883 barkentine Gazela of Philadelphia, while not venturing as far as the Great Lakes, has a busy schedule of port visitation along the New England coast as far as Halifax this summer. Also traveling the East Coast as far as Boston this summer is the three-masted topsail schooner Alexandria (ex-Swedish cargo vessel Lindo) operated by the Alexandria Seaport in Alexandria, Virginia. The voyage signals her return to the ranks of active sail training vessels after a period of uncertainty. For schedules of visits write NMHS for a copy of the April issue of Sea History Gazette. Underwater News The March/April issue of Archaeology magazine reports a slew of recent archaeological discoveries of ancient vessels. In eastern Paris at Berey, eleven dugouts dating to the Neolithic period (4300-3700BC) have been unearthed. Two of the dugouts are intact, the rest are in fragments . Conservation work is being carried out in Grenoble. In the Bohai Sea off Liaoning Province in northeast China, scientists from the Museum of Chinese History in Beijing have found the remains of a 740-year-old ship lying under 24 feet of sand. Aboard were hundreds of intact household pottery items dating to the Yuan Dynasty. Archaeology also reports the discovery of &quot;one of the world&#39;s oldest sea-going vessels,&quot; a Bronze Age boat dating to about 1400BC beneath Dover, in southern England. Found at the bottom of a 15-foot-square shaft dug for a construction project, one half of the vessel has been excavated for restoration while the other half will remain buried. Ironbottom Sound, so named as the graveyard for warships sunk during the Battle of Guadalcanal, received visitors determined to probe its depths on the 50th anniversary of the battle last year. Chuck Haberlain, Head of the Photographic Section of the Naval Historical Center, assisted Robert and Barbara Ballard and a National Geographic Society team conducting research for film SEA HISTORY 65 , SPRING 1993

Central America Update A recent US Supreme Court decision not to hear an appeal over ownership of the wreck of the steamship Central America, is likely to have broad implications for maritime archaeological efforts. A federal appeals court in Richmond last year overturned a district court decision and gave insurance companies part title to salvage from the 1857 wreck. Bullion and other artifacts had been recovered from the wreck by Columbus-America, Inc. of Columbus, Ohio. If the federal appeals court ruling stands, experts fear that the decision will leave open to claim from insurers artifacts excavated by treasure-hunters and university or museum archaeological expeditions alike. A fuller report will appear in the Summer issue of Sea History.

Getting to the Beaches: Normandy &#39;94 On January 5, Congresswoman Helen Delich Bentley, R-MD, introduced a bill to help fund the proposed voyage of World War II Liberty ships Jeremiah O&#39; Brien and John W. Brown and the Victory ship Lane to 50th anniversary commemorations of the Normandy invasion in 1994. HR 88 will make vessels in the National Defense Reserve Fleet available for scrapping-the proceeds from which will benefit the ships. In the case of the O&#39;Brien, she will be returning to beaches she visited on D-day. Marci Hooper, of the National Liberty Ship Memorial in San Francisco, describes the funds as necessary for ship repairs on the O&#39;Brien and urges supporters to write their congressional representatives in support of this effort. The voyage will be the most significant US civilian commemoration of the historic landing which began the liberation of Europe.

Mystic Seaport Expands Mystic Seaport Museum is embarking on a major expansion, and like a number of new waterfront developments, a major component of that expansion is a marine education and research center. The museum recently received a $1 million federal grant from the National Oceanic and Atmospheric Administration (NOAA) for a new facility on the museum&#39;s 17-acre site. The center will be housed in a 150,000-square-foot former velvet mill. Plans include new exhibit space for the museum&#39;s 450-boat small craft collection, climate controlled storage space, public auditoriums and meeting rooms, as well as the new marine research facilities and laboratories. The total cost for the expansion is estimated

Getting Around the Ships The 51-ft brigantine Black Pearl has left her home at Pier 15 at South Street Seaport for a new assignment with The Aquaculture Foundation in Bridgeport, Connecticut. The Black Pearl is the vessel Barclay Warburton used to establish the American Sail Training Association in the early 70s. Over the last ten years she has been operated by the New York Ship Trust in conjunction with its restoration of the South Street Seaport Museum ship Waverlree. Black Pearl will be based at Captain&#39;s Cove and docked near the tall ship Rose. She will be used for training cruises that teach marine skills, boat maintenance, engine repair and leadership. Unable to cover the costs of maintenance to a vessel they have cared for so

MUSEUM QUALITY SHIPS IN BOTTLES Finely detailed, hand crafted works of art. These are models of authentic ships placed into bottles. Color catalog available, will exhibitthequality of the artist&#39;s work. If you don&#39;t see the ship listed you are looking for, give me the ship&#39;s name and I will build it for you. Catalog is $3.00 refundable with first order. Write to: SHIPS IN GLASS