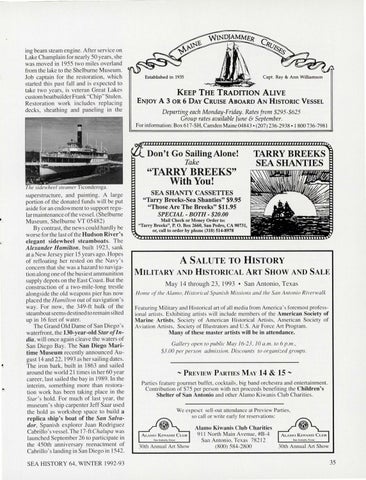 ing beam steam engine. After service on Lake Champlain for nearly 50 years, she was moved in 1955 two miles overland from the lake to the Shelburne Museum. Job captain for the restoration, which started this past fa ll and is expected to take two years, is veteran Great Lakes custom boatbuilder Frank &quot;Chip&quot; Stulen. Restoration work includes replacing decks, sheathing and paneling in the

superstructure, and painting. A large portion of the donated funds w ill be put aside for an endowment to support regular maintenance of the vessel. (S he lburne Museum, S he lburne VT 05482) By contrast, the news cou ld hardly be worse for the last of the Hudson Ri ver&#39;s elegant sidewheel stea mboats. T he Alexander Hamilton, built 1923, sank at a New Jersey pier 15 years ago. Hopes of refloating her rested on the Navy &#39; s concern that she was a hazard to navigation along one of the busiest amm uniti on supply depots on the East Coast. But the construction of a two-mile-long trestle alongside the o ld weapons pier has now placed the Hamilton out of navigation&#39;s way. For now, the 349-ft hulk of the steamboat seems destined to remain si lted up in 16 feet of water. The Grand Old Dame of San Diego&#39;s waterfront, the 130-year-old Star of India, wi ll once agai n cleave the waters of San Diego Bay. The San Diego Maritime Museum recently a nno unced August 14 and 22, 1993 as her sailing dates. The iron bark, built in 1863 and sailed around the world 21 times in her 60 year career, last sailed the bay in 1989. In the interim, something more than restoration work has been taking place in the Star&#39;s hold. For much of last year, the museum&#39;s ship carpenter Jeff Saar used the hold as workshop space to build a replica ship&#39;s boat of the San Salvador, Spanish exp lorer Juan Rodriguez Cabri ll o&#39;s vessel. The 17-ftChalupa was launched September 26 to participate in the 450th a nni versary reenactment of Cabri llo&#39;s landing in San Diego in 1542. SEA HISTORY 64, WINTER 1992-93

A SALUTE TO HISTORY MILITARY AND HISTORICAL ART SHOW AND SALE May 14 through 23, 1993 • San Antonio, Texas Home of the Alamo, Historical Spanish Missions and the San Antonio Riverwalk

Featuring Military and Hi storical art of all med ia from America&#39;s foremost professional artists. Ex hibiting arti sts will include members of the American Society of Marine Artists, Society of American Historical Artists, American Society of Aviation Art ists, Society of Illustrators and U.S. Air Force Art Program. Many of these master artists will be in attendance. Gallery open to public May 16-23, JO a .m. to 6 p.111., $3.00 per person admission. Discounts to organized groups.