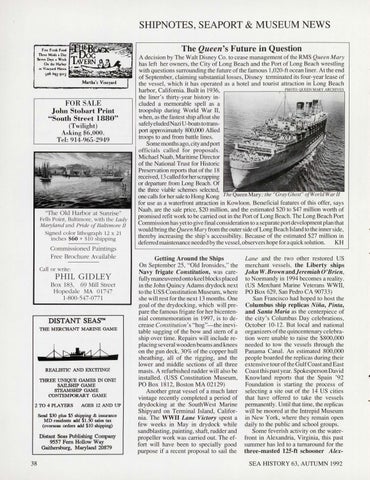 A decision by The Walt Di sney Co. to cease management of the RMS Queen Mary has left her owners, the City of Long Beach and the Port of Long Beach wrestling with questions surrounding the future of the famous 1,020-ft ocean liner. At the end of September, claiming substantial losses, Disney terminated its four-year lease of the vessel, which it has operated as a hotel and tourist attraction in Long Beach harbor, California. Built in 1936, PHOTO: uEEN MARY ARCH1vEs the liner&#39;s thirty-year history included a memorable spell as a troopship during World War II, when, as the fastest ship afloat she safelyeludedNazi U-boats to transport approximately 800,000 Allied troops to and from battle lines. Some months ago, city and port officials called for proposals . Michael Naab, Maritime Director of the National Trust for Historic Preservation reports that of the 18 received, 13 called for her scrapping or departure from Long Beach. Of the three viable schemes selected, one calls for her sale to Hong Kong The Queen Mary ; the &quot;Gray Ghost&quot; of World War 11 for use as a waterfront attraction in Kowloon. Beneficial features of this offer, says Naab, are the sale price, $20 million, and the estimated $20 to $47 million worth of promised refit work to be carried out in the Port of Long Beach. The Long Beach Port Commission has yet to give final consideration to a separate port development plan that would bring the Queen Mary from the outer side of Long Beach Island to the inner side, thereby increasing the ship &#39;s accessibility. Because of the estimated $27 million in deferred maintenance needed by the vessel , observers hope fora quick solution. KH Getting Around the Ships On September 25, &quot;Old Ironsides,&quot; the Navy frigate Constitution, was carefully maneuvered onto keel blocks placed in the John Quincy Adams drydock next to the USS Constitution Museum , where she will rest for the next 13 months. One goal of the drydocking, which will prepare the famous frigate for her bicentennial commemoration in 1997, is to decrease Constitution &#39;s &quot;hog&quot;-the inevitable sagging of the bow and stem of a ship over time. Repairs will include replacing several wooden beams and knees on the gun deck, 30% of the copper hull sheathing, all of the rigging, and the lower and middle sections of all three masts. A refurbished rudder will also be installed. (USS Constitution Museum, PO Box 1812, Boston MA 021 29) Another great vessel of a much later vintage recently completed a period of drydocking at the SouthWest Marine Shipyard on Terminal Island, California. The WWII Lane Victory spent a few weeks in May in drydock while sandblasting, painting, shaft, rudder and propeller work was carried out. The effort will have been to specially good purpose if a recent proposal to sail the

Lane and the two other restored US merchant vessels, the Liberty ships

John W. Brown and]eremiah 0&#39; Brien, to Normandy in 1994 becomes a reality. (US Merchant Marine Veterans WWII, PO Box 629, San Pedro CA 90733) San Francisco had hoped to host the Columbus ship replicas Nina, Pinta, and Santa Maria as the centerpiece of the city&#39;s Columbus Day celebrations, October 10-12. But local and national organizers of the quincentenary celebration were unable to raise the $800,000 needed to tow the vessels through the Panama Canal. An estimated 800,000 people boarded the replicas during their extensive tour of the GulfCoastand East Coast this past year. Spokesperson David Knowland reports that the Spain &#39;92 Foundation is starting the process of selecting a site out of the 14 US cities that have offered to take the vessels permanently. Until that time, the replicas will be moored at the Intrepid Museum in New York, where they remain open daily to the public and school groups. Some feverish activity on the waterfront in Alexandria, Virginia, thi s past summer has led to a turnaround for the three-masted 125-ft schooner AlexSEA HISTORY 63, AUTUMN 1992