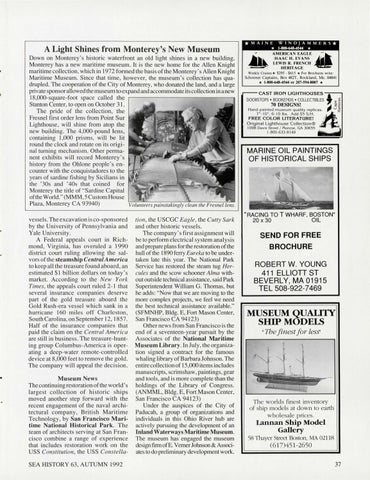 A Light Shines from Monterey&#39;s New Museum Down on Monterey&#39;s historic waterfront an old light shines in a new building. Monterey has a new maritime museum. It is the new home for the Allen Knight maritime collection, which in 1972 formed the basis of the Monterey&#39;s Allen Knight Maritime Museum. Since that time, however, the museum&#39;s collection has quadrupled. The cooperation of the City of Monterey, who donated the land, and a large private sponsor allowed the museum to expand and accommodate its collection in a new 18,000-square-foot space called the Stanton Center, to open on October 31. The pride of the collection, the Fresnel first order Jens from Point Sur Lighthouse, will shine from atop the new building. The 4,000-pound lens, containing 1,000 prisms, will be lit round the clock and rotate on its original turning mechanism. Other permanent exhibits will record Monterey &#39;s history from the Ohlone people &#39;s encounter with the conquistadores to the years of sardine fishing by Sicilians in the &#39;30s and &#39;40s that coined for Monterey the title of &quot;Sardine Capital of the World.&quot; (MMM, 5 Custom House Plaza, Monterey CA 93940) Volunteers painstakingly clean the Fresnel lens. vessels. The excavation is co-sponsored by the University of Pennsylvania and Yale University. A Federal appeals court in Richmond, Virginia, has overuled a 1990 district court ruling allowing the salvors of the steamship Central America to keep all the treasure found aboard, an estimated $1 billion dollars on today &#39;s market. According to the New York Times, the appeals court ruled 2-1 that several insurance companies deserve part of the gold treasure aboard the Gold Rush-era vessel which sank in a hurricane 160 miles off Charleston, South Carolina, on September 12, 1857. Half of the insurance companies that paid the claim on the Central America are sti ll in business. The treasure-hunting group Columbus-America is operating a deep-water remote-controlled device at 8,000 feet to remove the gold. The company will appeal the decision. Museum News The continuing restoration of the world&#39;s largest co ll ection of historic ships moved another step forward with the recent engagement of the naval architectural company, British Maritime Technology, by San Francisco Maritime National Historical Park. The team of architects serving at San Francisco combine a range of experience that includes restoration work on the USS Constitution, the USS ConstellaSEA HISTORY 63, AUTUMN 1992

tion, the USCGC Eagle , the Cutty Sark and other historic vessels. The company&#39;s first assignment will be to perform electrical system analysis and prepare plans for the restoration of the hull of the 1890 ferry Eureka to be undertaken late this year. The National Park Service has restored the steam tug Hercules and the scow schooner Alma without outside technical assistance, said Park Superintendent William G. Thomas, but he adds: &quot;Now that we are moving to the more complex projects, we feel we need the best technical assistance available.&quot; (SFMNHP, Bldg. E, Fort Mason Center, San Francisco CA 94123) Other news from San Francisco is the end of a seventeen-year pursuit by the Associates of the National Maritime Museum Library. In July, the organization signed a contract for the famous whaling library of Barbara Johnson. The entire collection of 15,000 items includes manuscripts , scrimshaw, paintings, gear and tools, and is more complete than the holdings of the Library of Congress. (ANMML, Bldg. E, Fort Mason Center, San Francisco CA 94123) Under the auspices of the City of Paducah, a group of organizations and individuals in this Ohio River hub are actively pursuing the development of an Inland Waterways Maritime Museum. The museum has engaged the museum design firm ofE. Verner Johnson &amp; Associates to do preliminary development work.

The worlds finest inventory of ship models at down to earth wholesale prices.