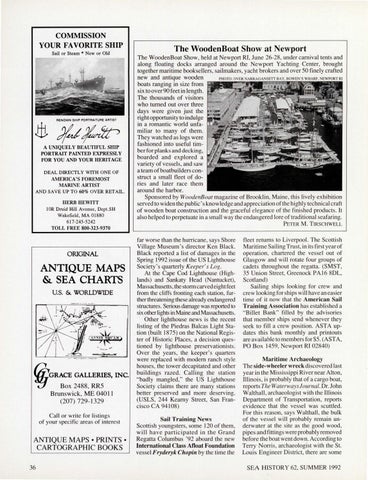 COMMISSION YOUR FAVORITE SHIP Sail or Steam• New or Old

.tfj, J/~P&#39; A UNIQ UELY BEAUTIFUL SHIP PORTRAIT PAINTED EXPRESSLY FOR YO U AND YOUR HERI TAGE DEAL DIRECTLY WITH ONE OF A.l\1ERI CA&#39;S FO REMOST MARINE ARTIST AND SAVE UP TO 60% OVER RETAIL.

The WoodenBoat Show at Newport The WoodenBoat Show, held at Newport RI, June 26-28, under carnival tents and along floating docks arranged around the Newport Yachting Center, brought together maritime booksellers, sailmakers, yacht brokers and over 50 finely crafted new and antique wooden boats ranging in size from six to over 90 feet in length. The thousands of visitors who turned out over three days were given j ust the right opportunity to indulge in a romantic world unfami liar to many of them. They watched as logs were fashioned into useful timber for planks and decking, boarded and explored a variety of vessels, and saw a team ofboatbuilders construct a small fleet of dories and later race them around the harbor. Sponsored by WoodenBoat magazine of Brooklin, Maine, this lively exhibition served to widen the public &#39;s knowledge and appreciation of the highly technical craft of wooden boat construction and the graceful elegance of the finished products. It also helped to perpetuate in a small way the endangered lore of traditional seafaring. PETER M. TIRSCHWELL far worse than the hurricane, says Shore Village Museum&#39;s director Ken Black. Black reported a list of damages in the Spring 1992 issue of the US Lighthouse Society &#39;s quarterly Keeper&#39;s Log. At the Cape Cod Lighthouse (Highlands) and Sankaty Head (Nantucket), Massachusetts, the storm carved eight feet from the cliffs fronting each station, further threatening these already endangered structures. Serious damage was reported to six other lights in Maine and Massachusetts. Other lighthouse news is the recent listing of the Piedras Balcas Light Station (built 1875) on the National Register of Hi storic Places, a deci sion questioned by lighthouse preservationists. Over the years, the keeper&#39;s quarters were replaced with modem ranch style houses, the tower decapitated and other buildings razed. Calling the station &quot;badly mangled,&quot; the US Lighthouse Society claims there are many stations better preserved and more deserving. (USLS, 244 Kearny Street, San Francisco CA 94108) Sail Training News Scottish youngsters, some 120 of them, will have participated in the Grand Regatta Columbus &#39;92 aboard the new International Class Afloat Foundation vessel Fryderyk Chopin by the time the

fleet returns to Liverpool. The Scottish Maritime Sailing Trust, in its first year of operation, chartered the vessel out of Glasgow and will rotate four groups of cadets throughout the regatta. (SMST, 35 Union Street, Greenock PA16 8DL, Scotland) Sailing ships looking for crew and crew looking for ships will have an easier time of it now that the American Sail Training Association has established a &quot;Billet Bank&quot; filled by the advisories that member ships send whenever they seek to fill a crew position. AST A updates this bank monthly and printouts are available to members for $5. (ASTA, PO Box 1459, Newport RI 02840) Maritime Archaeology The side-wheeler wreck discovered last year in the Mississippi River near Alton, Illinois, is probably that of a cargo boat, reports The Waterways Journal. Dr. John Walthall, archaeologist with the Illinois Department of Transportation, reports evidence that the vessel was scuttled. For this reason, says Walthall, the bulk of the vessel will probably remain underwater at the site as the good wood, pipes and fittings were probably removed before the boat went down. According to Terry Norris, archaeologist with the St. Louis Engineer District, there are some SEA HISTORY 62, SUMMER 1992