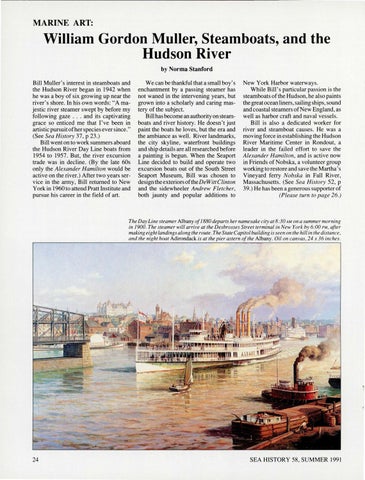 William Gordon Muller, Steamboats, and the Hudson River by Norma Stanford Bill Muller&#39;s interest in steamboats and the Hudson River began in 1942 when he was a boy of six growing up near the river&#39;s shore. In his own words: &quot;A majestic river steamer swept by before my following gaze ... and its captivating grace so enticed me that I&#39;ve been in artistic pursuit of her species ever since.&quot; (See Sea History 37, p 23.) Bill went on to work summers aboard the Hudson River Day Line boats from 1954 to 1957. But, the river excursion trade was in decline. (By the late 60s only the Alexander Hamilton would be active on the river.) After two years service in the army, Bill returned to New York in 1960 to attend Pratt Institute and pursue his career in the field of art.

We can be thankful that a small boy&#39;s enchantment by a passing steamer has not waned in the intervening years, but grown into a scholarly and caring mastery of the subject. Bill has become an authority on steamboats and river history. He doesn&#39;t just paint the boats he loves, but the era and the ambiance as well. River landmarks, the city skyline, waterfront buildings and ship details are all researched before a painting is begun. When the Seaport Line decided to build and operate two excursion boats out of the South Street Seaport Museum, Bill was chosen to design the exteriors oftheDeWittClinton and the sidewheeler Andrew Fletcher, both jaunty and popular additions to

New York Harbor waterways. While Bill &#39;s particular passion is the steamboats of the Hudson, he also paints the great ocean liners, sailing ships, sound and coastal steamers of New England, as well as harbor craft and naval vessels. Bill is also a dedicated worker for river and steamboat causes. He was a moving force in establishing the Hudson River Maritime Center in Rondout, a leader in the failed effort to save the Alexander Hamilton , and is active now in Friends of Nobska, a volunteer group working to restore and save the Martha&#39;s Vineyard ferry Nobska in Fall River, Massachusetts. (See Sea History 52, p 39.) He has been a generous supporter of (Please turn to page 26.)

The Day Line steamer Albany of 1880 departs her namesake city at 8 :30 AM on a summer morning in 1900. The steamer will arrive at the Desbrosses Street terminal in New York by 6:00 PM, after making eight landings along the route . The State Capitol building is seen on the hill in the distance, and the night boat Adirondack is at the pier astern of the Albany. Oil on canvas, 24 x 36 inches.