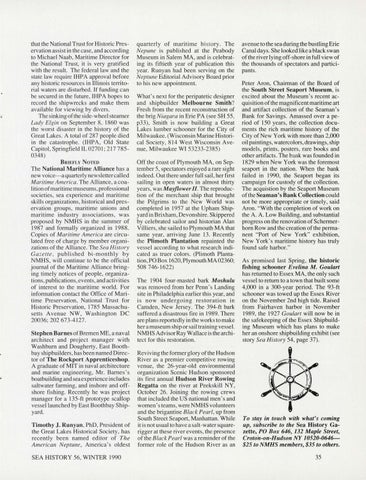 that the National Trust for Historic Preservation assist in the case, and according to Michael Naab, Maritime Director for the National Trust, it is very gratified with the result. The federal law and the state law require IHPA approval before any historic resources in Illinois territorial waters are disturbed. If funding can be secured in the future , IHP A hopes to record the shipwrecks and make them available for viewing by divers. The sinking of the side-wheel steamer Lady Elgin on September 8, 1860 was the worst disaster in the history of the Great Lakes. A total of 287 people died in the catastrophe. (IHP A, Old State Capitol, Springfield IL 02701; 217 7850348)

quarterly of mant1me hi story. The Nepune is published at the Peabody Museum in Salem MA, and is celebrating its fiftieth year of publication this year. Runyan had been serving on the Neptune Editorial Advisory Board prior to his new appointment.

Off the coast of Plymouth MA, on September 5, spectators enjoyed a rare sight indeed. Out there under full sail, her first sailing in open waters in almost thirty years, was Mayflower II. The reproduction of the merchant ship that brought the Pilgrims to the New World was completed in 1957 at the Upham Shipyard in Brixham, Devonshire. Skippered by celebrated sailor and historian Alan Villiers, she sailed to Plymouth MA that same year, arriving June 13. Recently the Plimoth Plantation repainted the vessel according to what research indicated as truer colors. (Plimoth Plantation, PO Box 1620, Plymouth MA 02360; 508 746-1622)

The National Maritime Alliance has a new voice-a quarterly newsletter called Maritime America. The Alliance, a coalition of maritime museums, professional societies, sea experience and maritime skills organizations, historical and preservation groups, maritime unions and maritime industry associations, was proposed by NMHS in the summer of 1987 and formally organized in 1988. Copies of Maritime America are circulated free of charge by member organizati.ons of the Alliance. The Sea History Ga zette, published bi-monthly by NMHS, will continue to be the official journal of the Maritime Alliance bringing timely notices of people, organizations, publications, events, and activities of interest to the maritime world. For information contact the Office of Maritime Preservation, National Trust for Historic Preservation, 1785 Massachusetts Avenue NW, Washington DC 20036; 202 673-4127. Stephen Barnes of Bremen ME, a naval architect and project manager with Washburn and Dougherty, East Boothbay shipbuilders, has been named Director of The Rockport Apprenticeshop. A graduate of MIT in naval architecture and marine engineering, Mr. Barnes&#39;s boatbuilding and sea experience includes saltwater farming, and inshore and offshore fishing. Recently he was project manager for a 135-ft prototype scallop vessel launched by East Boothbay Shipyard. Timothy J. Runyan, PhD, President of the Great Lakes Historical Society, has recently been named editor of The American Neptune, America&#39;s oldest SEA HISTORY 56, WINTER 1990

avenue to the sea during the bustling Erie Canal days. She looked like a black swan of the river lying off-shore in full view of the thousands of spectators and participants. Peter Aron, Chairman of the Board of the South Street Seaport Museum, is excited about the Museum&#39;s recent acquisition of the magnificent maritime art and artifact collection of the Seaman&#39;s Bank for Savings. Amassed over a period of 150 years, the collection documents the rich maritime history of the City of New York with more than 2,000 oil paintings, watercolors, drawings, ship models, prints, posters, rare books and other artifacts. The bank was founded in 1829 when New York was the foremost seaport in the nation. When the bank failed in 1990, the Seaport began its campaign for custody of the collection. The acquistion by the Seaport Museum of the Seaman&#39;s Bank Collection could not be more appropriate or timely, said Aron. &quot;With the completion of work on the A. A. Low Building, and substantial progress on the renovation of Schermerhorn Row and the creation of the permanent &quot;Port of New York&quot; exhibition, New York&#39;s maritime history has truly found safe harbor.&quot;

The 1904 four-masted bark Moshulu was removed from her Penn&#39;s Landing site in Philadelphia earlier this year, and is now undergoing restoration in Camden, New Jersey. The 394-ft bark suffered a disastrous fire in 1989. There are plans reported! yin the works to make her a museum ship or sail training vessel. NMHS Advisor Ray Wallace is the architect for this restoration.

As promised last Spring, the historic fishing schooner Evelina M. Goulart has returned to Essex MA, the only such vessel to return to a town that built some 4,000 in a 300-year period. The 93-ft schooner was towed up the Essex River on the November 2nd high tide. Raised from Fairhaven harbor in November 1989, the 1927 Goulart will now be in the safekeeping of the Essex Shipbuilding Museum which has plans to make her an onshore shipbuilding exhibit (see story Sea History 54, page 37).

Reviving the former glory of the Hudson River as a premier competitive rowing venue, the 26-year-old environmental organization Scenic Hudson sponsored its first annual Hudson River Rowing Regatta on the river at Peekskill NY, October 26. Joining the rowing crews that included the US national men&#39;s and women&#39;s teams, were NMHS volunteers and the brigantine Black Pearl, up from South Street Seaport, Manhattan. While it is not usual to have a salt-watersquarerigger at these river events, the presence of the Black Pearl was a reminder of the former role of the Hudson River as an