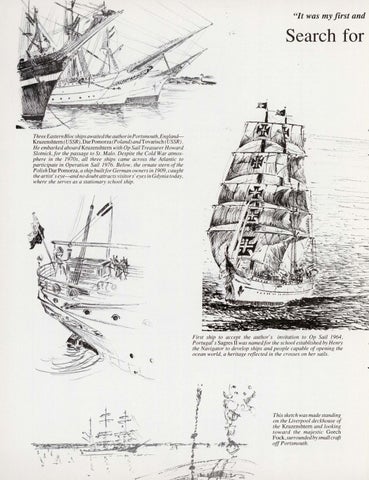 &quot;It was my first and

Three Eastern Bloc ships awaited the author in Portsmouth, EnglandKruzenshtem (USSR) , Dar Pomorza(Poland)andTovarisch (USSR). He embarked aboard Kruzenshtem with Op Sail Treasurer Howard Slotnick.for the passage to St. Malo. Despite the Cold War atmosphere in the 1970s, all three ships came across the Atlantic to participate in Operation Sail 1976. Below, the ornate stern of the Polish Dar Pomorza, a ship builtforGerman owners in 1909, caught the artist&#39;s eye-and no doubt attracts visitors&#39; eyes in Gdynia today, where she serves as a stationary school ship.

First ship to accept the author&#39;s invitation to Op Sail 1964, Portugal&#39;s Sagres II was namedfor the school established by Henry the Navigator to develop ships and people capable of opening the ocean world, a heritage reflected in the crosses on her sails.

This sketch was made standing . on the Liverpool deckhouse of the Kruzenshtem and looking toward the majestic Gorch Fock,surrounded by small craft off Portsmouth .