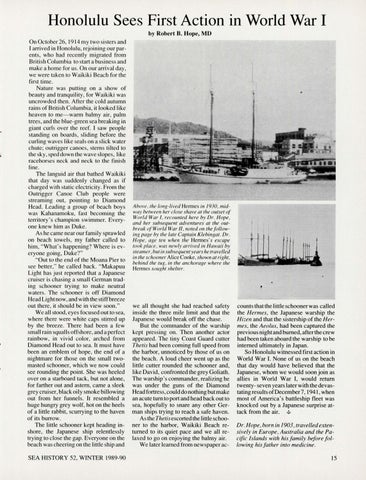 Honolulu Sees First Action in World War I by Robert B. Hope, MD On October26, 1914 my two sisters and I arrived in Honolulu, rejoining our parents, who had recently migrated from British Columbia to start a business and make a home for us. On our arrival day, we were taken to Waikiki Beach for the first time. Nature was putting on a show of beauty and tranquility, for Waikiki was uncrowded then. After the cold autumn rains of British Columbia, it looked like heaven to me-warm balmy air, palm trees, and the blue-green sea breaking in giant curls over the reef. I saw people standing on boards, sliding before the curling waves like seals on a slick water chute; outrigger canoes, sterns tilted to the sky, sped down the wave slopes, like racehorses neck and neck to the finish line. The languid air that bathed Waikiki that day was suddenly changed as if charged with static electricity. From the Outrigger Canoe Club people were streaming out, pointing to Diamond Head. Leading a group of beach boys Above, the long-lived Hermes in 1930, midwas Kahanamoku, fast becoming the way between her close shave at the outset of territory &#39;s champion swimmer. Every- World War I, recounted here by Dr. Hope, and her subsequent adventures at the outone knew him as Duke. break of World War II , noted on the followAs he came near our family sprawled ing page by the late Captain Klebingat. Dr. on beach towels, my father called to Hope, age ten when the Hermes&#39; s escape him , &quot; What&#39; s happening? Where is ev- took place, was newly arrived in Ha waii by steamer, but in subsequent years he travelled eryone going, Duke?&quot; &quot;Out to the end of the Moana Pier to in the schooner Alice Cooke, shown at right, behind the tug , in the anchorage where the see better,&quot; he called back. &quot;Makapuu Hermes sought shelter. Light has just reported that a Japanese cruiser is chasing a small German trading schooner trying to make neutral waters. The schooner is off Diamond Head Light now, and with the stiff breeze out there, it should be in view soon.&quot; we all thought she had reached safety counts that the little schooner was called We all stood, eyes focused out to sea, inside the three mile limit and that the the Hermes, the Japanese warship the where there were white caps stirred up Japanese would break off the chase. Hizen and that the sistership of the Herby the breeze. There had been a few But the commander of the warship mes, the Aeolus, had been captured the small rain squalls offshore, and a perfect kept pressing on. Then another actor previous night and burned, after the crew rainbow, in vivid color, arched from appeared. The tiny Coast Guard cutter had been taken aboard the warship to be Diamond Head out to sea. It must have Thetis had been coming full speed from interned ultimately in Japan. been an emblem of hope, the end of a the harbor, unnoticed by those of us on So Honolulu witnessed first action in nightmare for those on the small two- the beach. A loud cheer went up as the World War I. None of us on the beach masted schooner, which we now could little cutter rounded the schooner and, that day would have believed that the see rounding the point. She was heeled like David, confronted the grey Goliath. Japanese, whom we would soon join as over on a starboard tack, but not alone, The warship &#39;s commander, realizing he allies in World War I, would return for farther out and astern, came a sleek was under the guns of the Diamond twenty- seven years later with the devasgrey cruiser, black oily smoke billowing Head fortress, could do nothing but make tating results of December?, 1941 , when out from her funnels. It resembled a an acute turn to port and head back out to most of America&#39;s battleship fleet was huge hungry grey wolf, hot on the heels sea, hopefully to snare any other Ger- knocked out by a Japanese,surprise atof a little rabbit, scurrying to the haven man ships trying to reach a safe haven. tack from the air. w of its burrow. As the The tis escorted the Little schooThe little schooner kept heading in- ner to the harbor, Waikiki Beach re- Dr. Hope , born in 1903 , travelled extenshore, the Japanese ship relentlessly turned to its quiet pace and we all re- sively in Europe, Australia and the Patrying to close the gap. Everyone on the laxed to go on enjoying the balmy air. cific Islands with his family before folbeach was cheering on the little ship and We later learned from newspaper ac- lowing his father into medicine. SEA HISTORY 52, WINTER 1989-90