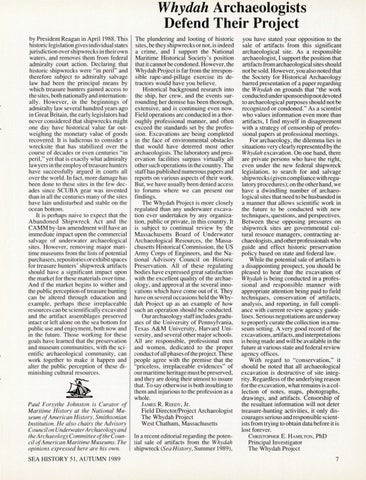 Whydah Archaeologists Defend Their Project by President Reagan in April 1988. This historic legislation gives individual states jurisdiction over shipwrecks in theirown waters, and removes them from federal admiralty court action . Declaring that historic shipwrecks were " in peril" and therefore subject to admiralty salvage law had been the principal means by which treasure hunters gained access to the sites, both nationally and internationally. However, in the begi nnings of admiralty law several hundred years ago in Great Britain, the early legislators had never considered that shipwrecks might one day have historical value far outweighing the monetary value of goods recovered. It is ludicrous to consider a wrecksite that has stabilized over the course of decades or even centuries "in peril ," yet that is exactly what admiralty lawyers in the employ of treas ure hunters have successfully argued in courts all over the world. In fact, more damage has been done to these sites in the few decades since SCUBA gear was invented than in all the centuries many of the sites have Jain undi sturbed and stable on the ocean bottom. It is perhaps naive to expect that the Abandoned Shipwreck Act and the CAMM by-law amendment will have an immediate impact upon the commercial salvage of underwater archaeological sites. However, removing major mari time museums from the lists of potential purchasers, repositories orexhibitspaces for treasure hunters' shipwreck artifacts should have a significant impact upon the market for these materials over time. And if the market begins to wither and the public perception of treasure hunting can be altered through education and example, perhaps these irreplaceable resources can be sc ientifically excavated and the artifact assemblages preserved intact or left alone on the sea bottom for public use and enjoyment, both now and in the future. Those working for these goals have learned that the preservation and museum communities, with the scientific archaeological community, can work together to make it happen and alter the public perception of these diminishing cultural resources.

Paul Forsythe Johnston is Curator of Maritime History at the National Museum of American History, Smithsonian In stitution. He also chairs the Advisory Council on Underwater Archaeology and the Archaeology Committee ofthe Council ofAmerican Maritime Museums. The opinions expressed here are his own. SEA HISTORY 51, AUTUMN 1989

The plundering and looting of historic sites, be they shipwrecks or not, is indeed a crime, and I support the National Maritime Historical Society 's position that it cannot be condoned. However, the Whydah Project is far from the irresponsible rape-and-pillage exercise its detractors would have you believe. Historical background research into the ship, her crew, and the events surrounding her demise has been thorough, extensive, and is continuing even now. Field operations are conducted in a thoroughly profess ional manner, and often exceed the standards set by the profession. Excavations are being completed in the face of environmental obstacles that would have deterred most other archaeologists. The laboratory and preservation facilities surpass virtually all other such operations in the country. The staff has publi shed numerous papers and reports on various aspects of their work. But, we have usually been denied access to forums where we can present our findings. The Whydah Project is more closely regulated than any underwater excavation ever undertaken by any organization , public or private, in this country. It is subject to continual review by the Massachusetts Board of Underwater Archaeological Resources, the Massachusetts Historical Commission, the US Army Corps of Engineers, and the National Advisory Council on Historic Preservation. All of these regulating bodies have expressed great satisfaction with the excellent quality of the archaeology, and approval at the several innovations which have come out of it. They have on several occasions held the Whydah Project up as an example of how such an operation should be conducted. Our archaeology staff includes graduates of the University of Pennsylvania, Texas A&M University, Harvard University, and several other major schools. All are responsible, professional men and women, dedicated to the proper conduct of all phases of the project. These people agree with the premise that the "priceless, irreplaceable evidences" of our maritime heritage must be preserved, and they are doing their utmost to insure that. To say otherwise is both insulting to them and injurious to the profession as a whole. J AMES R . R EEDY, Jr.

Field Director/Project Archaeologist The Whydah Project West Chatham, Massachusetts In a recent editorial regarding the potential sale of artifacts from the Whydah shipwreck (Sea History, Summer 1989),

you have stated your opposition to the sale of artifacts from this significant archaeological site. As a responsible archaeologist, I support the position that artifacts from archaeological sites should not be sold. However, you also noted that the Society for Historical Archaeology barred presentation of a paper regarding the Whydah on grounds that "the work conducted under sponsorship not devoted to archaeological purposes should not be recognized or condoned." As a scientist who values information even more than artifacts, I find myself in disagreement with a strategy of censorship of professional papers at professional meetings. For archaeology, the dilemma lies in situations very clearly represented by the Whydah excavation. On one hand, there are private persons who have the right, even under the new federal shipwreck legi slation, to search for and salvage shipwrecks (given compliance with regulatory procedures); on the other hand, we have a dwindling number of archaeological sites that need to be husbanded in a manner that allows scientific work in the future to be conducted with new techniques, questions, and perspectives. Between these opposing pressures on shipwreck sites are governmental cultural resouce managers, contracting archaeologists, and other professionals who guide and effect historic preservation policy based on state and federal law. While the potential sale of artifacts is a disappointing prospect, you should be pleased to hear that the excavation of Whydah is being conducted in a professional and responsible manner with appropriate attention being paid to field techniques, conservation of artifacts, analysis, and reporting, in full compliance with current review agency guidelines. Serious negotiations are underway to properly curate the collection in a museum setting. A very good record of the excavations, artifacts, and interpretations is being made and will be available in the future at various state and federal review agency offices. With regard to "conservation ," it should be noted that all archaeological excavation is destructive of site integrity. Regardless of the underlying reason for the excavation, what remains is a collection of notes, maps , photographs, drawings, and artifacts. Censorship of the resultant information will not deter treasure-hunting activities, it only discourages serious and responsible scientists from trying to obtain data before it is lost forever. CHRISTOPHER E. H AMILTON, PhD Principal Investigator The Whydah Project 7