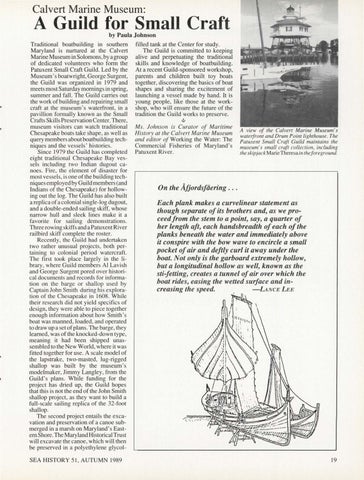 A Guild for Stnall Craft by Paula Johnson

Traditional boatbuilding in southern Maryland is nurtured at the Calvert Marine Museum in Solomons, by a group of dedicated volunteers who form the Patuxent Small Craft Guild. Led by the Museum's boatwright, George Surgent, the Guild was organized in 1979 and meets most Saturday mornings in spring, summer and fall. The Guild carries out the work of building and repairing small craft at the museum's waterfront, in a pavillion formally known as the Small Crafts Skills Preservation Center. There, museum visitors can watch traditional Chesapeake boats take shape, as well as query members about boatbuilding techniques and the vessels' histories. Since 1979 the Guild has completed e ight traditional Chesapeake Bay vessels including two Indian dugout canoes. Fire, the element of disaster for most vessels, is one of the building techniques employed by Guild members (and Indians of the Chesapeake) for hollowing out the log. The Guild has also built a replica of a colonial single-log dugout, and a double-ended sailing skiff, whose narrow hull and sleek lines make it a favorite for sailing demonstrations. Three rowing skiffs and aPatuxent River railbird skiff complete the roster. Recently, the Guild had undertaken two rather unusual projects, both pertaining to colonial period watercraft. The first took place largely in the library, where Guild members Al Lavish and George Surgent pored over hi storical documents and records for information on the barge or shallop used by Captain John Smith during his exploration of the Chesapeake in 1608. While their research did not yield specifics of design, they were able to piece together enough information about how Smith 's boat was manned, loaded, and operated to draw up a set of plans. The barge, they learned, was of the knocked-down type, meaning it had been shipped unassembled to the New World, where it was fitted together for use. A scale model of the lapstrake, two-masted, lug-rigged shallop was built by the museum 's modelmaker, Jimmy Langley, from the Guild's plans. While funding for the project has dried up, the Guild hopes that this is not the end of the John Smith shallop project, as they want to build a full-scale sailing replica of the 32-foot shall op. The second project entails the excavation and preservation of a canoe submerged in a marsh on Maryland 's Eastern Shore. The Maryland Historical Trust will excavate the canoe, which will then be preserved in a polyethylene glycolSEA HISTORY 51 , AUTUMN 1989

filled tank at the Center for study. The Guild is committed to keeping alive and perpetuating the traditional skills and knowledge of boatbuilding. At a recent Guild-sponsored workshop, parents and children built toy boats together, discovering the basics of boat shapes and sharing the excitement of launching a vessel made by hand. It is young people, like those at the workshop, who will ensure the future of the tradition the Guild works to preserve.

Ms . Johnson is Curator of Maritime History at the Calvert Marine Museum and editor of Working the Water: The Commercial Fisheries of Maryland 's Patuxent River.

A view of the Calvert Marine Museum's waterfront and Drum Point lighthouse. The Patuxent Small Craft Guild maintains the museum's small craft collection, including the skipjack Marie Theresa in the foreground.

On the Ajjordsfaering ... Each plank makes a curvelinear statement as though separate of its brothers and, as we proceed from the stem to a point, say, a quarter of her length aft, each handsbreadth of each of the planks beneath the water and immediately above it conspire with the bow wave to encircle a small pocket of air and deftly curl it away under the boat. Not only is the garboard extremely hollow, but a longitudinal hollow as well, known as the sti-fetting, creates a tunnel of air over which the boat rides, easing the wetted surface and in-LANCE LEE creasing the speed.