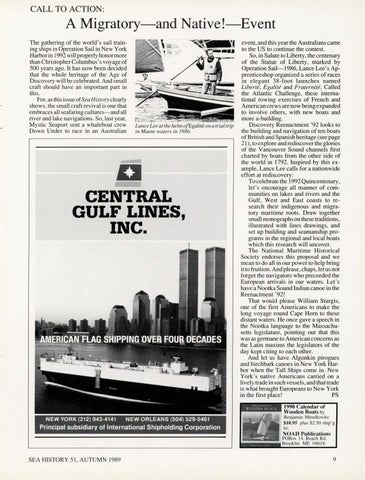 A Migratory-and Native!-Event The gathering of the world &#39;s sail training ships in Operation Sail in New York Harbor in 1992 will proper! y honor more than Christopher Columbus&#39; s voyage of 500 years ago. It has now been decided that the whole heritage of the Age of Discovery will be celebrated. And small craft should have an important part in thi s. For, as this issue of SeaHistory clearly shows, the small craft revival is one that embraces all seafaring cultures-and all river and lake navigations. So, last year, Mystic Seaport sent a whaleboat crew Down Under to race in an Australian

event, and this year the Australians came to the US to continue the contest. So, in Salute to Liberty, the centenary of the Statue of Liberty, marked by Operation Sail-1986, Lance Lee&#39;s Apprenticeshop organized a series of races in elegant 38-foot launches named Liberti, Egalite and Fraternite. Called the Atlantic Challenge, these international rowing exercises of French and American crews are now being expanded to involve others, with new boats and more a-building. Discovery Reenactment &#39;92 looks to the building and navigation of ten boats of British and Spanish heritage (see page 21 ), to explore and rediscover the glories of the Vancouver Sound channels first charted by boats from the other side of the world in 1792. Inspired by this example, Lance Lee calls for a nationwide effort at rediscovery: To celebrate the 1992 Quincentenary, let&#39;s encourage all manner of communities on lakes and rivers and the Gulf, West and East coasts to research their indigenous and migratory maritime roots. Draw together small monographs on these traditions, illustrated with lines drawings, and set up building and seamanship programs in the regional and local boats which this research will uncover. The National Maritime Historical Society endorses this proposa1 and we mean to do all in our power to help bring it to fruition. And please, chaps, let us not forget the navigators who preceeded the European arrivals in our waters. Let&#39;s have a Nootka Sound Indian canoe in the Reenactment &#39;92! That would please William Sturgis, one of the first Americans to make the long voyage round Cape Hom to these distant waters. He once gave a speech in the Nootka language to the Massachusetts legislature, pointing out that this was as germane to American concerns as the Latin maxims the legislators of the day kept citing to each other. And let us have Algonkin pirogues and birchbark canoes in New York Harbor when the Tall Ships come in. New York &#39;s native Americans carried on a lively trade in such vessels, and that trade is what brought Europeans to New York in the first place! PS &quot;