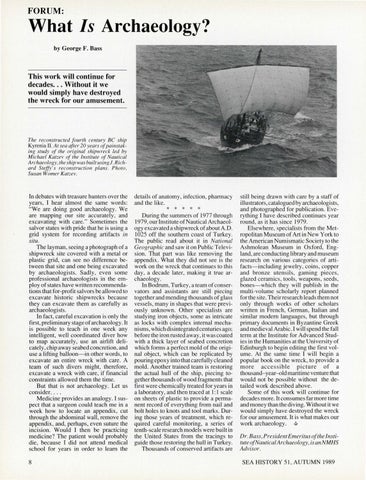 What Is Archaeology? by George F. Bass

This work will continue for decades . .. Without it we would simply have destroyed the wreck for our amusement.

In debates with treasure hunters over the years, I hear almost the same words: "We are doing good archaeology. We are mapping our site accurately, and excavating with care." Sometimes the salvor states with pride that he is using a grid system for recording artifacts in situ. The layman, seeing a photograph of a shipwreck site covered with a metal or plastic grid, can see no difference between that site and one being excavated by archaeologists. Sadly, even some professional archaeologists in the employ of states have written recommendations that for-profit salvors be al lowed to excavate hi storic shipwrecks because they can excavate them as carefully as archaeologists. In fact, careful excavation is only the first, preliminary stage of archaeology. It is possible to teach in one week any intelligent, well coordinated diver how to map accurately, use an airlift delicately , chip away seabed concretion, and use a lifting balloon-in other words , to excavate an entire wreck with care. A team of such divers might, therefore, excavate a wreck with care, if financial constraints allowed them the time. But that is not archaeology. Let us consider. ... Medicine provides an analogy. I suspect that a surgeon could teach me in a week how to locate an appendix, cut through the abdominal wall, remove the appendix, and , perhaps, even suture the incision. Would I then be practicing medicine? The patient wou ld probably die, because I did not attend medical school for years in order to learn the

During the summers of 1977 through 1979, our Institute of Nautical Archaeology excavated a shipwreck of about A.D. 1025 off the southern coast of Turkey. The public read about it in National Geographic and saw it on Public Television. That part was like removing the appendix. What they did not see is the work on the wreck that continues to this day , a decade later, making it true archaeology. In Bodrum, Turkey, a team of conservators and assistants are still piecing together and mending thousands of glass vessels, many in shapes that were previously unknown . Other specialists are studying iron objects, some as intricate as locks with complex internal mechanisms, which disintegrated centuries ago; before the iron rusted away, it was coated with a thick layer of seabed concretion which forms a perfect mold of the original object, which can be replicated by pouring epoxy into that carefully cleaned mold. Another trained team is restoring the actual hull of the ship, piecing together thousands of wood fragments that first were chemically treated for years in a laboratory, and then traced at I: 1 scale on sheets of plastic to provide a permanent record of everything from nail and bolt holes to knots and tool marks. During those years of treatment, which required careful monitoring, a series of tenth-scale research models were built in the United States from the tracings to guide those restoring the hull in Turkey. Thousands of conserved artifacts are

still being drawn with care by a staff of illustrators, catalogued by archaeologists, and photographed for publication. Everything I have described continues year round, as it has since 1979. Elsewhere, speciali sts from the Metropolitan Museum of Art in New York to the American Numismatic Society to the Ashmolean Museum in Oxford, England, are conducting library and museum research on various categories of artifacts-including jewelry, coins, copper and bronze utensil s, gaming pieces , glazed ceramics, tool s, weapons, seeds, bones-which they will publish in the multi-volume scholarly report planned for the site. Their research leads them not on ly through works of other scholars written in French, German, Italian and simi lar modern languages, but through primary documents in Byzantine Greek and medieval Arabic. I will spend the fa ll term at the Institute for Advanced Studies in the Humanities at the University of Edinburgh to begin editing the first volume. At the same time I will begin a popular book on the wreck , to provide a more accessible picture of a thousand-year-old maritime venture that wou ld not be possible without the detailed work described above. Some of this work will continue for decades more. It consumes fa r more time and money than the diving. Without it we would simply have destroyed the wreck for our am usement. It is what makes our work archaeology. w