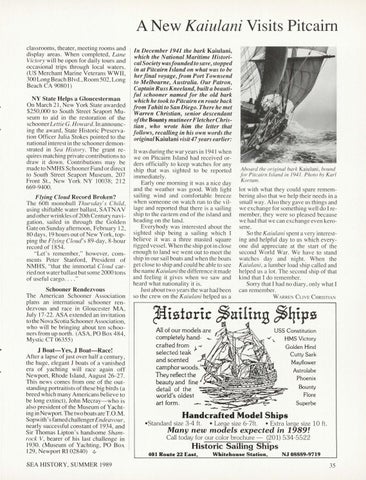 NY State Helps a Gloucesterman On March 21, New York State awarded $250,000 to South Street Seaport Museum to aid in the restoration of the schooner Lettie G. Haward. In announcing the award, State Historic Preservation Officer Julia Stokes pointed to the national interest in the schooner demonstrated in Sea History. The grant requires matching private contributions to draw it down. Contributions may be made to NMHS Schooner Fund or direct to South Street Seaport Museum , 207 Front St., New York NY 10038; 212 669-9400.

Schooner Rendezvous The American Schooner Association plans an international schooner rendezvous and race in Gloucester MA , July 17-22. ASA extended an invitation to the Nova Scotia Schooner Association, who will be bringing about ten schooners from up north . (ASA , PO Box 484 , Mystic CT 06355)

J Boat-Yes, J Boat-Race! After a lapse of just over half a century , the huge, elegant J boats of a vanished era of yachting will race again off Newport, Rhode Island, August 26-27. This news comes from one of the outstanding portraitists of these big birds (a breed which many Americans believe to be long extinct), John Mecray-who is also president of the Museum of Yachting in Newport. The two boats are T.O.M. Sopwith&#39;s famed challenger Endeavour, nearly successful constant of 1934, and Sir Thomas Lipton &#39; s handsome Shamrock V, bearer of his last challenge in 1930. (Muse um of Yachting, PO Box 129, Newport RI 02840) &lt;t .SEA HISTORY, SUMMER 1989

In December 1941 the bark Kaiulani, which the National Maritime Historical Society was founded to save, stopped in at Pitcairn Island on what was to be her final voyage,from Port Townsend to Melbourne, Australia. Our Patron, Captain Russ Kneeland, built a beautiful schooner named for the old bark which he took to Pitcairn en route back from Tahiti to San Diego. There he met Warren Christian, senior descendant ofthe Bounty mutineer F letcherChristian, who wrote him the letter that follows, recalling in his own words the original Kaiulani visit 47 years earlier:

It was during the war years in 1941 when we on Pitcairn Island had received orders officially to keep watches for any ship that was sighted to be reported immediately. Early one morning it was a nice day and the weather was good. With light sailing wind and comfortable breeze when someone on watch run to the village and reported that there is a sailing ship to the eastern end of the island and heading on the lanJ. Everybody was interested about the sighted ship being a sailing which I believe it was a three masted square rigged vessel. When the ship got in close enough to land we went out to meet the ship in our sail boats and when the boats get close to ship and could be able to see the name Kaiulanithe difference it made and feeling it gives when we saw and heard what nationality it is. Just about two years the war had been so the crew on the Kaiulani helped us a

lot with what they could spare remembering also that we help their needs in a small way. Also they gave us things and we exchange for something well do I remember, they were so pleased because we had that we can exchange even kerosene. So the Kaiulani spent a very interesting and helpful day to us which everyone did appreciate at the start of the second World War. We have to stand watches day and night. When the Kaiulani , a lumber load ship called and helped us a lot. The second ship of that kind that I do remember. Sorry that I had no diary, only what I can remember. W A RREN CLIV E CHRI STIA N

Many new models expected in 1989! Call today for our color brochure -