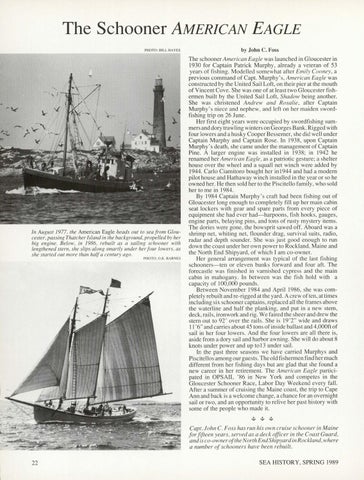 In August 1977, the American Eagle heads out to sea from Gloucester, passing Thatcher Island in the background, propelled by her big engine. Below, in 1986, rebuilt as a sailing schooner with lengthened stern, she slips along smartly under her four lowers, as she started out more than half a century ago. PHOTO: 0.K. BARNES

The schooner American Eagle was launched in Gloucester in 1930 for Captain Patrick Murphy, already a veteran of 53 years of fishing. Modelled somewhat after Emily Cooney, a previous command of Capt. Murphy&#39;s, American Eagle was constructed by the United Sail Loft, on their pier at the mouth of Vincent Cove. She was one of at least two Gloucester fishermen built by the United Sail Loft, Shadow being another. She was christened Andrew and Rosalie, after Captain Murphy &#39;s ni ece and nephew, and left on her maiden swordfishing trip on 26 June. Her first eight years were occupied by swordfishing summers and dory trawling winters on Georges Bank. Rigged with four lowers and a husky Cooper Bessemer, she did well under Captain Murphy and Captain Rose. In 1938, upon Captain Murphy&#39; s death, she came under the management of Captain Pine. A larger engine was installed in 1938; in 1942 he renamed her American Eagle, as a patriotic gesture; a shelter house over the wheel and a squall net winch were added by 1944. Carlo Ciamitoro bought her in 1944 and had a modern pilot house and Hathaway winch installed in the year or so he owned her. He then sold her to the Piscitello family, who sold her to me in 1984. By 1984 Captain Murphy &#39;s craft had been fishing out of Gloucester long enough to completely fill up her main cabin seat Jockers with gear and spare parts from every piece of equipment she had ever had- harpoons , fish hooks, gauges, engine parts, bel ay ing pins, and tons of rusty mystery items. The dories were gone, the bowsprit sawed off. Aboard was a shrimp net, whiting net, flounder drag, survival suits, radio, radar and depth sounder. She was just good enough to run down the coast under her own power to Rockland , Maine and the North End Shipyard, of which I am co-owner. Her general arrangement was typical of the last fishing schooners-ten or eleven bunks forward and four aft. The forecastle was finished in varnished cypress and the main cabin in mahogany. In between was the fish hold with a capacity of 100,000 pounds. Between November 1984 and April 1986, she was completely rebuilt and re-rigged at the yard. A crew often, at times including six schooner captains, replaced all the frames above the waterline and half the planking, and put in a new stem, deck, rails, ironwork and rig. We faired the sheer and drew the stern out to 92&#39; over the rails. She is 19 &#39;2&quot; wide and draws 11 &#39;6&quot; and carries about 45 tons of inside ballast and 4,000ft of sail in her four lowers. And the four lowers are all there is, aside from a dory sail and harbor awning. She will do about 8 knots under power and up to 13 under sail. In the past three seasons we have carried Murphys and Piscitellos among our guests. The old fishermen find her much different from her fishing days but are glad that she found a new career in her retirement. The American Eagle participated in OPSAIL &#39;86 in New York and competes in the Gloucester Schooner Race, Labor Day Weekend every fall. After a summer of cruising the Maine coast, the trip to Cape Ann and back is a welcome change, a chance for an overnight sail or two, and an opportunity to relive her past history with some of the people who made it.

www Capt. John C. Foss has run his own cruise schooner in Maine forfifteen years, served as a deck officer in the Coast Guard, and is co-owner ofthe NorthEndShipyard in Rockland, where a number of schooners have been rebuilt. 22