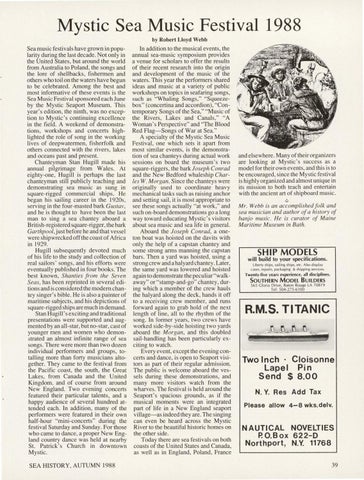 Sea music festivals have grown in popularity during the last decade. Not only in the United States, but around the world from Australia to Poland, the songs and the lore of shellbacks, fishermen and others who toil on the waters have begun to be celebrated. Among the best and most informative of these events is the Sea Music Festival sponsored each June by the Mystic Seaport Museum. This year's edition, the ninth, was no exception to Mystic's continuing excellence in the field. A weekend of demonstrations, workshops and concerts highlighted the role of song in the working lives of deepwatermen, fisherfolk and others connected with the rivers, lakes and oceans past and present. Chanteyman Stan Hugill made his annual pilgrimage from Wales. At eighty-one, Hugill is perhaps the last chanteyman sti ll publicly teaching and demonstrating sea music as sung in square-rigged commercial ships. He began his sai ling career in the 1920s, serv ing in the four-masted bark Gustav, and he is thought to have been the last man to sing a sea chantey aboard a British-registered square-rigger, the bark Garthpool,just before he and that vessel were shipwrecked off the coast of Africa in 1929. Hugill subsequently devoted much of his life to the study and collection of real sai lors' songs, and hi s efforts were eventually published in four books. The best known, Shanties from the Seven Seas, has been reprinted in several editions and is considered the modem chantey singer's bible. He is also a painter of maritime subjects, and his depictions of square-rigged ships are much in demand. Stan Hugill 's exciting and traditional presentations were supported and augmented by an all-star, but no-star, cast of younger men and women who demonstrated an almost infinite range of sea songs. There were more than two dozen individual performers and groups, totalling more than forty musicians altogether. They came to the festival from the Pacific coast, the south, the Great Lakes, from Canada and the United Kingdom, and of course from around New England. Two evening concerts featured their particular talents, and a happy audience of several hundred attended each. In addition, many of the performers were featured in their own half-hour "mini-concerts" during the festival Saturday and Sunday. For those who came to dance, a proper New England country dance was held at nearby St. Patrick' s Church in downtown Mystic. SEA HISTORY, AUTUMN 1988

In addition to the musical events, the annual sea-music symposium provides a venue for scholars to offer the results of their recent research into the origin and development of the music of the waters. This year the performers shared ideas and music at a variety of public workshops on topics in seafaring songs, such as "Whaling Songs," "Squeezebox" (concertina and accordion), "Contemporary Songs of the Sea," "Music of the Rivers, Lakes and Canals," "A Woman's Perspective" and "The Blood Red Flag-Songs of War at Sea." A specialty of the Mystic Sea Music Festival, one which sets it apart from most similar events, is the demonstration of sea chanteys during actual work sessions on board the museum 's two square-riggers, the bark Joseph Conrad and the New Bedford whaleship Charles W. Morgan. Since the chanteys were originally used to coordinate heavy mechanical tasks such as raising anchor and setting sai l, it is most appropriate to see these songs actually "at work," and such on-board demonstrations go a long way toward educating Mystic's visitors about sea music and sea life in general. Aboard the Joseph Conrad, a oneton boat was hoisted on the davits with only the help of a capstan chantey and some strong arms manning the capstan bars. Then a yard was hoisted, using a strong crew and a halyard chantey. Later, the same yard was lowered and hoisted again to demonstrate thepeculiar"walkaway" or "stamp-and-go" chantey, during which a member of the crew hauls the halyard along the deck, hands it off to a receiving crew member, and runs forward again to grab hold of the next length of line, all to the rhythm of the song. In former years, two crews have worked side-by-side hoisting two yards aboard the Morgan, and thi s doubled sail-handling has been particularly exciting to watch. Every event, except the evening concerts and dance, is open to Seaport visitors as part of their regular admission,. The public is welcome aboard the vessels during these demonstrations, and many more visitors watch from the wharves. The festival is held around the Seaport's spacious grounds, as if the musical moments were an integrated part of life in a New England seaport village-as indeed they are. The singing can even be heard across the Mystic River to the beautiful historic homes on the other side. Today there are sea festivals on both coasts of the United States and Canada, as well as in England, Poland, France

and elsewhere. Many of their organizers are looking at Mystic's success as a model for their own events, and this is to be encouraged, since the Mystic festival is highly organized and almost unique in its mission to both teach and entertain with the ancient art of shipboard music. ..J,

Mr. Webb is an accomplished folk and sea musician and author of a history of banjo music. He is curator of Maine Maritime Museum in Bath.