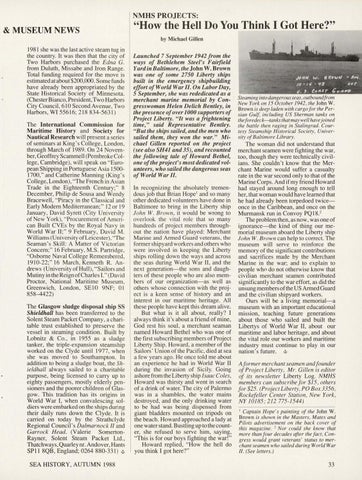 "How the Hell Do You Think I Got Here?" by Michael Gillen

1981 she was the last active steam tug in the country. It was then that the city of Two Harbors purchased the Edna G. from Duluth, Missabe and Iron Range. Total funding required for the move is estimated at about $200,000. Some funds have already been appropriated by the State Historical Society of Minnesota. (Chester Bianco, President, Two Harbors City Council, 610 Second Avenue, Two Harbors, WI 55616; 218 834-5631) The International Commission for Maritime History and Society for Nautical Research will present a series of semi nars at King 's College, London, through March of 1989. On 24 November, Geoffrey Scammell (Pembroke College, Cambridge), will speak on "European Shipping in Portuguese Asia 15001700," and Catherine Manning (King's College, London), "The French in Asian Trade in the Eighteenth Century; " 8 December, Philip de Sousa and Wendy Bracewell, "Piracy in the Classical and Early Modern Mediterranean;" 12or19 January, David Syrett (City University of New York), "Procurement of American Built CVEs by the Royal Navy in World War II;" 9 February, David M. Williams (University of Leicester) , "The Seaman's Skill: A Matter of Victorian Concern;" 16 February, M.S. Partridge, "Osborne Naval College Remembered , 1910-22;" 16 March , Kenneth R. Andrews (University of Hull), " Sailors and Mutiny in the Reign of Charles I." (David Proctor, National Maritime Museum , Greenwich, London, SElO 9NF; 01 858-4422) The Glasgow sludge disposal ship SS Shieldhall has been transferred to the Solent Steam Packet Company, a charitable trust established to preserve the vessel in steaming condition. Built by Lobnitz & Co., in 1955 as a sludge tanker, the triple-expansion steamship worked on the Clyde until 1977, when she was moved to Southampton. In addition to being a sludge boat, the Shieldhall always sailed to a charitable purpose, being licensed to carry up to eighty passengers, mostly elderly pensioners and the poorer children of Glasgow. This tradition has its origins in World War I, when convalescing soldiers were embarked on the ships during their daily runs down the Clyde. It is carried on today by the Strathclyde Regional Council's Dalmarnock lI and Garrock Head. (Valerie SomertonRayner, Solent Steam Packet Ltd. , Thatchways , Quarley nr. Andover, Hants SPl 1 8QB, England; 0264 880-331) ..v SEA HISTORY, AUTUMN 1988

Launched 7 September 1942 from the ways of Bethlehem Steel's Fairfield Yard in Baltimore, the John W. Brown was one of some 2750 Liberty ships built in the emergency shipbuilding effort of World War II. On Labor Day, 5 September, she was rededicated as a merchant marine memorial by Congresswoman Helen Delich Bentley, in the presence ofover 1000 supporters of Project Liberty. "It was a frightening time," said Representative Bentley. "But the ships sailed, and the men who sailed them, they won the war." Michael Gillen reported on the project (see also SH41and35), and recounted the following tale of Howard Bethel, one of the project's most dedicated volunteers, who sailed the dangerous seas of World War II. In recognizing the absolutely tremendous job that Brian Hope 1 and so many other dedicated volunteers have done in Baltimore to bring in the Liberty ship John W. Brown, it would be wrong to overlook the vital role that so many hundreds of project members throughout the nation have played: Merchant Marine and Armed Guard veterans, the former shipyard workers and others who were involved in keeping the Liberty ships rolling down the ways and across the seas during World War II, and the next generation-the sons and daughters of these people who are also members of our organization-as well as others whose connection with the project is a keen sense of history and an interest in our maritime heritage. All these people have kept this dream alive. But what is it all about, really? I always think it 's about a friend of mine, God rest his soul, a merchant seaman named Howard Bethel who was one of the first subscribing members of Project Liberty Ship. Howard , a member of the Sailors' Union of the Pacific, died at sea a few years ago. He once told me about an experience he had in World War g during the invasion of Sicily. Going ashore from the Liberty ship Isaac Coles, Howard was thirsty and went in search of a drink of water. The city of Palermo was in a shambles, the water mains destroyed, and the only drinking water to be had was being dispensed from giant bladders mounted on tripods on the beach. Howard approached a lady at one water stand.Bustling up to the counter, she refused to serve him, saying, "This is for our boys fighting the war!" Howard replied, "How the hell do you think I got here?"

Steaming into dangerous seas, outboundfrom New York on 15 October 1942, the John W. Brown is deep laden with cargo for the Persian Gulf, including US Sherman tanks on theforede ck-tanks that may well have joined the battle then raging in Stalingrad. Courtesy Steamship Historical Society , University of Baltimore Library.

The woman did not understand that merchant seamen were fighting the war, too, though they were technically civilians. She couldn't know that the Merchant Marine would suffer a casualty rate in the war second only to that of the Marine Corps. And if my friend Howard had stayed around long enough to tell her, that woman would have learned that he had already been torpedoed twiceonce in the Caribbean, and once on the Murmansk run in Convoy PQ18. 2 The problem then, as now, was one of ignorance-the kind of thing our memorial museum aboard the Liberty sh ip John W. Brown can help to correct. The museum will serve to reinforce the memory of the significant contributions and sacrifices made by the Merchant Marine in the war; and to explain to people whn do not otherwise know that civilian merchant seamen contributed significantly to the war effort, as did the unsung members of the US Armed Guard and the civilian shipyard workers. Ours will be a living memorial-a museum with an important educational mission, teaching future generations about those who sailed and built the Libertys of World War II, about our maritime and labor heritage, and about the vital role our workers and maritime industry must continue to play in our nation's future. ..V

Aformer merchant seamen and founder of Project Liberty, Mr. Gillen is editor of its newsletter Liberty Log. NMHS members can subscribe for $15, others for $25. (Project Liberty, PO Box 3356, Rockefeller Center Station, New York, NY 10185; 212 775-1544) 1 Captain Hope' s painting of the John W. Brown is shown in the Masters , Mates and Pilots advertisement on the back cover of this magazine. 2 Nor could she know that more than four decades after the fact , Congress would grant veterans' status to merchant seamen who sailed during World War II. (See letters.)