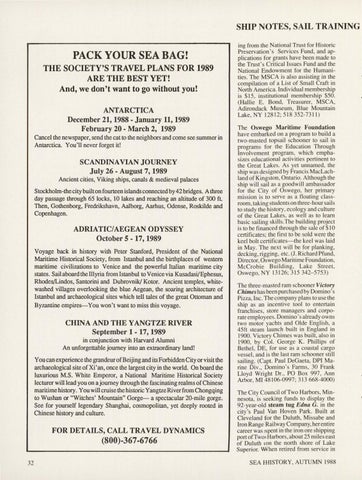 ADRIATIC/AEGEAN ODYSSEY October 5 - 17, 1989 Voyage back in history with Peter Stanford, President of the National Maritime Historical Society, from Istanbul and the birthplaces of western maritime civilizations to Venice and the powerful Italian maritime city states. Sail aboard the Illyria from Istanbul to Venice via Kusadasi/Ephesus, Rhodes/Lindos, Santorini and Dubrovnik/ Kotor. Ancient temples, whitewashed villages overlooking the blue Aegean, the soaring architecture of Istanbul and archaeological sites which tell tales of the great Ottoman and Byzantine empires-You won't want to miss this voyage.

CHINA AND THE YANGTZE RIVER September 1 - 17, 1989 in conjunction with Harvard Alumni An unforgettable journey into an extraordinary land! You can experience the grandeur ofBeijing and its Forbidden City or visit the archaeological site of Xi' an, once the largest city in the world. On board the luxurious M.S. White Emperor, a National Maritime Historical Society lecturer will lead you on a journey through the fascinating realms of Chinese maritime history. You will cruise the historic Yangtze River from Chongqing to Wushan or "Witches' Mountain" Gorge- a spectacular 20-mile gorge. See for yourself legendary Shanghai, cosmopolitan, yet deeply rooted in Chinese history and culture.

ing from the National Trust for Historic Preservation' s Services Fund, and applications for grants have been made to the Trust's Critical Issues Fund and the National Endowment for the Humanities. The MSCA is also assisting in the compilation of a List of Small Craft in North America. Individual membership is $15, institutional membership $50. (Hallie E. Bond, Treasurer, MSCA , Adirondack Museum , Blue Mountain Lake, NY 12812; 518 352-7311) The Oswego Maritime Foundation have embarked on a program to build a two-masted topsail schooner to sail in programs for the Education Through Involvement program , which emphasizes educational activities pertinent to the Great Lakes. As yet unnamed, the ship was designed by Francis MacLachland of Kingston, Ontario. Although the ship will sai l as a goodwi ll ambassador for the City of Oswego, her primary mission is to serve as a floating classroom, taking students on three-hour sails to study the hi story, ecology and culture of the Great Lakes, as well as to learn basic sailing skills.The building project is to be financed through the sale of $10 certificates; the first to be sold were the keel bolt certificates-the keel was laid in May. The next will be for planking, decking, rigging, etc. (J. Richard Pfund , Director, Oswego Maritime Foundation, McCrobie Building , Lake Street, Oswego, NY 13126; 315 342-5753) The three-masted ram schooner Victory Chimes has been purchased by Domino 's Pizza, Inc. The company plans to use the ship as an incentive tool to entertain franchises, store managers and corporate employees. Domino 's already owns two motor yachts and Olde English, a 45ft steam launch built in England in 1900. Victory Chimes was built, also in 1900, by Col. George K. Phillips of Bethel, DE, for use as a coastal cargo vessel, and is the last ram schooner still sailing. (Capt. Paul DeGaeta, DPI Marine Div., Domino 's Farms, 30 Frank Lloyd Wright Dr., PO Box 997, Ann Arbor, MI 48106-0997; 313 668-4000) The City Council of Two Harbors , Minnesota, is seeking funds to display the 92-year-old steam tug Edna G. in the city's Paul Van Hoven Park. Built at Cleveland for the Duluth, Missabe and Iron Range Railway Company, herentire career was $ pent in the iron ore shipping port of Two> Harbors, about 25 miles east of Duluth <On the north shore of Lake Superior. \W"hen retired from service in SEA I-HISTORY , AUTUMN 1988