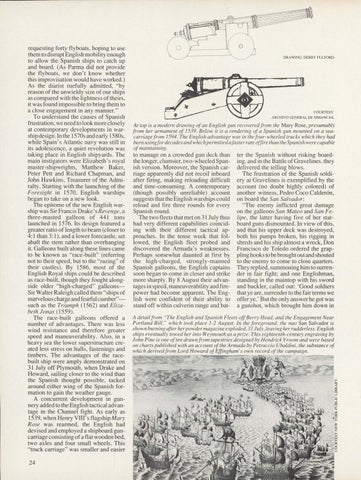 requesting forty flyboats, hoping to use them to disrupt English mobility enough to allow the Spanish ships to catch up and board. (As Parma did not provide the flyboats, we don't know whether this improvisation would have worked.) As the diarist ruefully admitted, "by reason of the unwieldy size of our ships as compared with the lightness of theirs, it was found impossible to bring them to a close engagement in any manner." To understand the causes of Spanish frustration, we need to look more closely at contemporary developments in warship design. In the 1570s and early 1580s, while Spain's Atlantic navy was still in its adolescence, a quiet revolution was taking place in English shipyards. The main instigators were Elizabeth's royal master-shipwrights, Matthew Baker, Peter Pett and Richard Chapman, and John Hawkins, Treasurer of the Admiralty. Starting with the launching of the Foresight in 1570, English warships began to take on a new look. The epitome of the new English warship was Sir Francis Drake's Revenge, a three-masted galleon of 441 tons launched in 1576. Its design featured a greater ratio of length to beam (closer to 4: 1 than 3: 1), and a lower forecastle, set abaft the stem rather than overhanging it. Galleons built along these lines came to be known as "race-built" (referring not to their speed, but to the "razing" of their castles). By 1586, most of the English Royal ships could be described as race-built, though they fought alongside older "high-charged" galleonsSir Walter Raleigh called them "ships of marvelous charge and fearful cumber"such as the Triumph ( 1562) and Elizabeth Jonas ( 1559). The race-built galleons offered a number of advantages. There was less wind resistance and therefore greater speed and maneuverability. Also, in a heavy sea the lower superstructure created less stress on hulls, fastenings and timbers. The advantages of the racebuilt ship were amply demonstrated on 31 July off Plymouth, when Drake and Howard, sailing closer to the wind than the Spanish thought possible, tacked around either wing of the Spanish formation to gain the weather gauge. A concurrent development in gunnery added to the English tactical advantage in the Channel fight. As early as 1539, when Henry VIII's flagship Mary Rose was rearmed, the English had devised and employed a shipboard guncarriage consisting of a flat wooden bed, two axles and four small wheels. This "truck carriage" was smaller and easier 24

At top is a modern drawing of an English gun recovered from the Mary Rose, presumably from her armament of 1539. Below it is a rendering of a Spanish gun mounted on a seacarriage from 1594. The English advantage was in the four-wheeled trucks which they had been usingfordecades and which permitted a faster rate offire than the Spanish were capable of maintaining.

to manage on a crowded gun deck than the longer, clumsier, two-wheeled Spanish version. Moreover, the Spanish carriage apparently did not recoil inboard after firing, making reloading difficult and time-consuming. A contemporary (though possibly unreliable) account suggests that the English warships could reload and fire three rounds for every Spanish round. The two fleets that met on 31 July thus had very different capabilities coinciding with their different tactical approaches. In the tense week that followed, the English fleet probed and discovered the Armada's weaknesses. Perhaps somewhat daunted at first by the high-charged, strongly-manned Spanish galleons, the English captains soon began to come in closer and strike more sharply. By 8 August their advantages in speed, maneuverability and firepower had become apparent. The English were confident of their ability to stand off within culverin range and bat-

ter the Spanish without risking boarding, and in the Battle of Gravelines, they delivered the telling blows. The frustration of the Spanish soldiery at Gravelines is exemplified by the account (no doubt highly colored) of another witness, Pedro Coco Calderon, on board the San Salvador: "The enemy inflicted great damage on the galleons San Mateo and San Felipe, the latter having five of her starboard guns dismounted. In view of this, and that his upper deck was destroyed, both his pumps broken, his rigging in shreds and his ship almost a wreck, Don Francisco de Toledo ordered the grappling hooks to be brought out and shouted to the enemy to come to close quarters. They replied, summoning him to surrender in fair fight; and one Englishman, standing in the maintop with his sword and buckler, called out: 'Good soldiers that ye are, surrender to the fair terms we offer ye.' But the only answer he got was a gunshot, which brought him down in

A detail from "The English and Spanish Fleets off Berry Head, and the Engagement Near Portland Bill," which took place 1-2 August. In the foreground , the nao San Salvador is shown burning after her powder magazine exploded,31 July, leaving her rudderless. English ships eventually towed her into Weymouth as a prize. This eighteenth-century engraving by John Pine is one of ten drawn from tapestries designed by Hendrick Vroom and were based on charts published with an account of the Armada by Petruccio Ubaldini , the substance of which derived from Lord Haward of Effingham' s own record of the campaign.