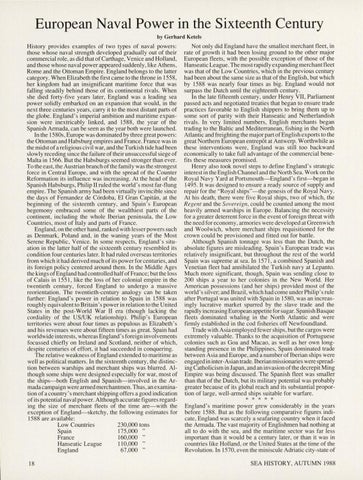 European Naval Power in the Sixteenth Century by Gerhard Ketels

History provides examples of two types of naval powers: those whose naval strength developed gradually out of their commercial role, as did that of Carthage, Venice and Holland, and those whose naval power appeared suddenly, like Athens, Rome and the Ottoman Empire. England belongs to the latter category. When Elizabeth the first came to the throne in 1558, her kingdom had an insignificant maritime force that was falling steadily behind those of its continental rivals. When she died forty-five years later, England was a leading sea power solidly embarked on an expansion that would, in the next three centuries years, carry it to the most distant parts of the globe. England's imperial ambition and maritime expansion were inextricably linked , and 1588, the year of the Spanish Armada, can be seen as the year both were launched. In the 1580s, Europe was dominated by three great powers: the Ottoman and Habsburg empires and France. France was in the midst of a religious civil war, and the Turkish tide had been slowly receding since the failure of their unsuccessful siege of Malta in 1566. But the Habsburgs seemed stronger than ever. To the east, the Austrian branch of the family was the strongest force in Central Europe, and with the spread of the Counter Reformation its influence was increasing. At the head of the Spanish Habsburgs, Philip II ruled the world 's most far-flung empire. The Spanish army had been virtually invincible since the days of Fernandez de Cordoba, El Gran Capitan, at the beginning of the sixteenth century, and Spain's European hegemony embraced some of the wealthiest parts of the continent, including the whole Iberian peninsula, the Low Countries, most of Italy and parts of France. England, on the other hand, ranked with lesser powers such as Denmark, Poland and, in the waning years of the Most Serene Republic, Venice. In some respects, England's situation in the latter half of the sixteenth century resembled its condition four centuries later. It had ruled overseas territories from which it had derived much of its power for centuries, and its foreign policy centered around them. In the Middle Ages the kings of England had controlled half of France; but the loss of Calais in 1551 , like the loss of her colonial empire in the twentieth century, forced England to undergo a massive reorientation. The twentieth-century analogy can be taken further: England's power in relation to Spain in 1588 was roughly equivalentto Britain's power in relation to the United States in the post-World War II era (though lacking the cordiality of the US/UK relationship). Philip's European territories were about four times as populous as Elizabeth 's and hi s revenues were about fifteen times as great. Spain had worldwide interests, whereas England's foreign involvements focussed chiefly on Ireland and Scotland, neither of which, despite centuries of effort, it had succeeded in conquering. The relative weakness of England extended to maritime as well as political matters . In the sixteenth century, the distinction between warships and merchant ships was blurred. Although some ships were designed especially for war, most of the ships-both English and Spanish- i nvolved in the Armada campaign were armed merchantmen. Thus, an examination of a country's merchant shipping offers a good indication of its potential naval power. Although accurate figures regarding the size of merchant fleets of the time are-with the exception of England-sketchy, the following estimates for 1588 are available: Low Countries 230,000 tons 175 ,000 " Spain 160,000 " France 110,000 " Hanseatic League 67,000 " England 18

Not only did England have the smallest merchant fleet, in rate of growth it had been losing ground to the other major European fleets, with the possible exception of those of the Han sea tic League. The most rapidly expanding merchant fleet was that of the Low Countries, which in the previous century had been about the same size as that of the English, but which by 1588 was nearly four times as big. England would not surpass the Dutch until the eighteenth century. In the late fifteenth century, under Henry VII, Parliament passed acts and negotiated treaties that began to ensure trade practices favorable to English shippers to bring them up to some sort of parity with their Hanseatic and Netherlandish rival s. In very limited numbers, English merchants began trading to the Baltic and Mediterranean, fishing in the North Atlantic and freighting the major part of English exports to the great Northern European entrep6t at Antwerp. Worthwhile as these interventions were, England was still too backward economically to take full advantage of the commercial benefits these measures promised. Henry also took novel steps to define England's strategic interest in the English Channel and the North Sea. Work on the Royal Navy Yard at Portsmouth-England 's first-began in 1495. It was designed to ensure a ready source of supply and repair for the "Royal ships"-the genesis of the Royal Navy. At his death, there were five Royal ships, two of which, the Regent and the Sovereign, could be counted among the most heavily armed warships in Europe. Balancing the necessity for a greater deterrent force in the event of foreign threat with the need for economy, armories were developed at Greenwich and Woolwich, where merchant ships requisitioned for the crown could be provisioned and fitted out for battle. Although Spanish tonnage was less than the Dutch, the absolute figures are misleading. Spain's European trade was relatively insignificant, but throughout the rest of the world Spain was supreme at sea. In 1571 , a combined Spanish and Venetian fleet had annihilated the Turkish navy at Lepanto. Much more significant, though , Spain was sending close to 200 ships a year to her colonies in the New World. Her American possessions (and her ships) provided most of the world's silver; and Brazil, which had come under Philip 's rule after Portugal was united with Spain in 1580, was an increasingly lucrative market spurred by the slave trade and the rapidly increasing European appetite for sugar. Spanish Basque fleets dominated whaling in the North Atlantic and were firmly established in the cod fi sheries off Newfoundland. Trade with Asia employed fewer ships, but the cargos were extremely valuable. Thanks to the acquisition of Portuguese colonies such as Goa and Macao, as well as her own longstanding presence in the Philippines, Spain dominated trade between Asia and Europe, and a number of Iberian ships were engaged in inter-Asian trade. Iberian missionaries were spreading Catholicism in Japan, and an invasion of the decrepit Ming Empire was being discussed. The Spanish fleet was smaller than that of the Dutch, but its military potential was probably greater because of its global reach and its substantial proportion of large, well-armed ships suitable for warfare.

England's maritime power grew considerably in the years before 1588. But as the following comparative figures indicate, England was scarcely a seafaring country when it faced the Armada. The vast majority of Englishmen had nothing at all to do with the sea, and the maritime sector was far less important than it would be a century later, or than it was in countries like Holland, or the United States at the time of the Revolution . In 1570, even the miniscule Adriatic city-state of SEA HISTORY, AUTUMN 1988