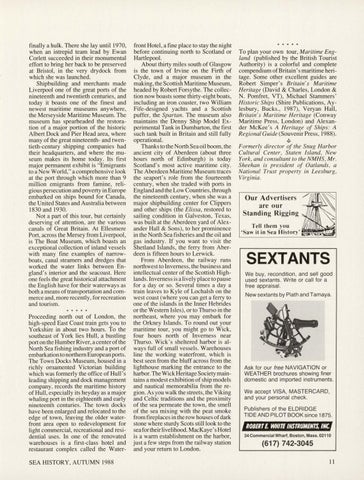 finally a hulk. There she lay until 1970, when an intrepid team lead by Ewan Corlett succeeded in their monumental effort to bring her back to be preserved at Bristol, in the very drydock from which she was launched. Shipbuilding and merchants made Liverpool one of the great ports of the nineteenth and twentieth centuries, and today it boasts one of the finest and newest maritime museums anywhere, the Merseyside Maritime Museum. The museum has spearheaded the restoration of a major portion of the historic Albert Dock and Pier Head area, where many of the great nineteenth- and twentieth-century shipping companies had their headquarters, and where the museum makes its home today. Its first major permanent exhibit is "Emigrants to a New World," a comprehensive look at the port through which more than 9 million emigrants from famine, religious persecution and poverty in Europe embarked on ships bound for Canada, the United States and Australia between 1830 and 1930. Not a part of this tour, but certainly deserving of attention, are the various canals of Great Britain. At Ellesmere Port, across the Mersey from Liverpool, is The Boat Museum, which boasts an exceptional collection of inland vessels with many fine examples of narrowboats, canal steamers and dredges that worked the water links between England's interior and the seacoast. Here one feels the great historical attachment the English have for their waterways as both a means of transportation and commerce and, more recently, for recreation and tourism . Proceeding north out of London, the high-speed East Coast train gets you to Yorkshire in about two hours. To the southeast of York lies Hull , a bust! ing port on the Humber River, a centerof the North Sea fishing industry and a port of embarkation to northern European ports. The Town Docks Museum, housed in a richly ornamented Victorian building which was formerly the office of Hull's leading shipping and dock management company, records the maritime history of Hull , especially its heyday as a major whaling port in the eighteenth and early nineteenth centuries. The town docks have been enlarged and relocated to the edge of town , f~~ing the older waterfront area open to redevelopment for light commercial, recreational and residential uses. In one of the renovated warehouses is a first-class hotel and restaurant complex called the WaterSEA HISTORY, AUTUMN 1988

front Hotel, a fine place to stay the night before continuing north to Scotland or Hartlepool. About thirty miles south of Glasgow is the town of Irvine on the Firth of Clyde, and a major museum in the making, the Scottish Mari time Museum, headed by Robert Forsythe. The collection now boasts some thirty-eight boats , including an iron coaster, two William Fife-designed yachts and a Scottish puffer, the Spartan. The museum also maintains the Denny Ship Model Experimental Tank in Dumbarton, the first such tank built in Britain and still fully operational. Thanks to the North Sea oil boom , the ancient city of Aberdeen (about three hours north of Edinburgh) is today Scotland's most active maritime city. The Aberdeen Maritime Museum traces the seaport's role from the fourteenth century, when she traded with ports in England and the Low Countries, through the nineteenth century, when she was a major shipbuilding center for Clippers and other ships (the Elissa, restored to sailing condition in Galveston, Texas, was built at the Aberdeen yard of Alexander Hall & Sons), to her prominence in the North Sea fisheries and the oil and gas industry. If you want to visit the Shetland Islands, the ferry from Aberdeen is fifteen hours to Lerwick. From Aberdeen, the railway runs northwest to Inverness, the business and intellectual center of the Scottish Highlands. Inverness is a lively place to pause for a day or so. Several times a day a train leaves to Kyle of Lochalsh on the west coast (where you can get a ferry to one of the islands in the Inner Hebrides or the Western Isles), or to Thurso in the northeast, where you may embark for the Orkney Islands. To round out your maritime tour, you might go to Wick, four hours north of Inverness near Thurso. Wick's sheltered harbor is always full of small vessels. Warehouses line the working waterfront, which is best seen from the bluff across from the, lighthouse marking the entrance to the harbor. The Wick Heritage Society maintains a modest exhibition of ship models and nautical memorabilia from the region. As you walk the streets, the Viking and Celtic traditions and the proximity of the sea permeate the town, the smell of the sea mixing with the peat smoke from fireplaces in the row houses of dark stone where sturdy Scots still look to the sea for their livelihood. MacKaye' s Hotel is a warm establishment on the harbor, just a few steps from the railway station and your return to London.

Formerly director of the Snug Harbor Cultural Center, Staten Island, New York, and consultant to the NMHS, Mr. Sheehan is president of Oat/ands, a National Trust property in Leesburg, Virginia.

SEXTANTS We buy, recondition , and sell good used sextants. Write or call for a free appraisal. New sextants by Plath and Tamaya.

Ask for our free NAVIGATION or WEATHER brochures showing finer domestic and imported instruments. We accept VISA, MASTERCARD, and your personal check. Publishers of the ELDRIDGE TIDE AND PILOT BOOK since 1875.