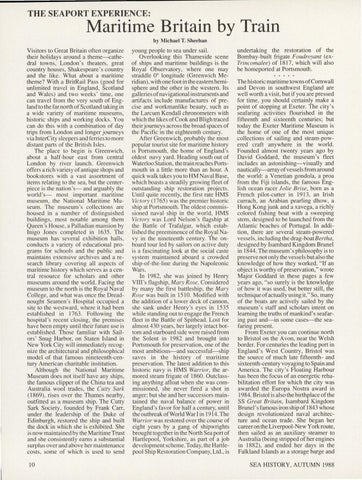 Visitors to Great Britain often organize their holidays around a theme-cathedral towns, London's theaters, great country houses, Shakespeare's country and the like. What about a maritime theme? With a BritRail Pass (good for unlimited travel in England, Scotland and Wales) and two weeks' time, one can travel from the very south of England to the far north of Scotland taking in a wide variety of maritime museums, hi storic ships and working docks. You can do this with a combination of day trips from London and longer journeys via InterCity sleepers and ferries to more distant parts of the British Isles. The place to begin is Greenwich, about a half-hour east from central London by river launch. Greenwich offers a rich variety of antique shops and bookstores with a vast assortment of items relating to the sea, but the centerpiece is the nation's- and arguably the world 'smost important maritime muse um, the National Maritime Museum. The museum's collections are housed in a number of distinguished buildings, most notable among them Queen's House, a Palladian mansion by Inigo Jones completed in 1635. The museum has several exhibition halls, conducts a variety of educational programs for schools and the public and maintains extensive archives and a research library covering all aspects of maritime hi story which serves as a central resource for scholars and other museums around the world. Facing the museum to the north is the Royal Naval College, and what was once the Dreadnought Seamen's Hospital occupied a site to the westward, where it had been established in 1763. Following the hospital 's recent closing, the premises have been empty until their future use is established. Those familiar with Sailors' Snug Harbor, on Staten Island in New York City will immediately recognize the architectural and philosophical model of that famous nineteenth-century American charitable institution. Although the National Maritime Museum does not itself have any ships, the famous clipper of the China tea and Australia wool trades, the Cutty Sark (1869), rises over the Thames nearby, outfitted as a museum ship. The Cutty Sark Society, founded by Frank Carr, under the leadership of the Duke of Edinburgh, restored the ship and built the dock in which she is exhibited. She is now maintained by the Maritime Trust and she consistently earns a substantial surplus over and above her maintenance costs, some of which is used to send 10

young people to sea under sail. Overlooking thi s Thameside scene of ships and maritime buildings is the Royal Observatory, where one may straddle 0Â° longitude (Greenwich Meridian), with one foot in the eastern hemisphere and the other in the western. Its galleries of navigational instruments and artifacts include manufactures of precise and workmanlike beauty, such as the Larcum Kendall chronometers with which the likes of Cook and Bligh traced their journeys across the broad spaces of the Pacific in the eighteenth century. After Greenwich, probably the most popular tourist site for maritime history is Portsmouth, the home of England's oldest navy yard. Heading south out of Waterloo Station, the train reaches Portsmouth in a little more than an hour. A quick walk takes you to HM Naval Base, which boasts a steadily growing fleet of outstanding ship restoration projects. Until quite recently, the first rate HMS Victory (1765) was the premier historic ship at Portsmouth. The oldest commissioned naval ship in the world, HMS Victory was Lord Nelson's flagship at the Battle of Trafalgar, which establi shed the preeminence of the Royal Navy in the nineteenth century. The onboard tour led by sailors on active duty is a fascinating look at the social caste system maintained aboard a crowded ship-of-the-line during the Napoleonic Wars. In 1982, she was joined by Henry YUi's flagship, Mary Rose. Considered by many the first battleship, the Mary Rose was built in 1510. Modified with the addition of a lower deck of cannon, she sank under Henry's eyes in 1535 while standing out to engage the French fleet in the Battle of Spithead. Lost for almost 430 years, her largely intact bottom and starboard side were raised from the Solent in 1982 and brought into Portsmouth for preservation, one of the most ambitious-and successful -ship saves in the history of maritime preservation . The latest addition to this hi storic navy is HMS Warrior, the armored steam frigate of 1860. Outclassing anything afloat when she was commi ssioned, she never fired a shot in anger; but she and her successors maintained the naval balance of power in England's favor for half a century, until the outbreak of World War I in 1914. The Warrior was restored over the course of eight years by a gang of shipwrights brought together in the North Sea port of Hartlepool, Yorkshire, as part of a job development scheme. Today, the Hartlepool Ship Restoration Company, Ltd., is

undertaking the restoration of the Bombay-built frigate Foudroyant (exTrincomalee) of 1817, which will also be homeported at Portsmouth. The historic maritime towns of Cornwall and Devon in southwest England are well worth a visit, but if you are pressed for time, you should certainly make a point of stopping at Exeter. The city's seafaring activities flourished in the fifteenth and sixteenth centuries; but today the Exeter Maritime Museum is the home of one of the most unique collections of sailing and steam-powered craft anywhere in the world. Founded almost twenty years ago by David Goddard, the museum 's fleet includes an astonishing-visually and nautically-array of vessels from around the world: a Venetian gondola, a proa from the Fiji islands, the famous English ocean racer Jolie Brise, born as a French pilot-cutter in 1913, an Irish currach, an Arabian pearling dhow, a Hong Kong junk and a xavega, a richly colored fishing boat with a sweeping stem, designed to be launched from the Atlantic beaches of Portugal. In addition , there are several steam-powered vessels, including the drag-boat Bertha, designed by Isambard Kingdom Brunel in 1844. The museum 's philosophy is to preserve not only the vessels but also the knowledge of how they worked. "If an object is worthy of preservation," wrote Major Goddard in these pages a few years ago, "so surely is the knowledge of how it was used, but better still, the technique of actually using it." So, many of the boats are actively sailed by the museum 's staff and scholars intent on learning the truths of mankind's seafaring past and-in some cases-the seafaring present. From Exeter you can continue north to Bristol on the Avon, near the Welsh border. For centuries the leading port in England's West Country, Bristol was the source of much late fifteenth- and sixteenth-century voyaging to Spain and America. The city's Floating Harbour has been the focus of an energetic rehabilitation effort for which the city was awarded the Europa Nostra award in 1984. Bristol is also the birthplace of the SS Great Britain, Isambard Kingdom Brunel 's famous iron ship of 1843 whose design revolutionized naval architecture and ocean trade. She began her careeron the Liverpool-New York route, then sailed as an auxiliary steamer to Australia (being stripped of her engines in 1882), and ended her days in the Falkland Islands as a storage barge and SEA HISTORY, AUTUMN 1988