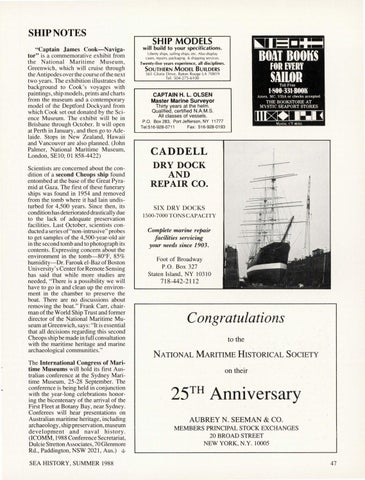 SHIP NOTES "Captain James Cook-Navigator" is a commemorative exhibit from th e National Maritim e Museum , Greenwich , which will cruise through the Antipodes overthe course of the next two years. The exhibition illustrates the background to Cook 's voyages with paintings, ship models, prints and charts from the museum and a contemporary model of the Deptford Dockyard from which Cook set out donated by the Science Museum. The exhibit will be in Brisbane through October. It wi ll open at Perth in January, and then go to Adelaide. Stops in New Zealand, Hawaii and Vancouver are also planned. (John Palmer, National Maritime Museum , London, SElO; 01 858-4422) Scientists are concerned about the condition of a second Cheops ship found entombed at the base of the Great Pyramid at Gaza. The first of these funerary ships was found in 1954 and removed from the tomb where it had lain undisturbed for 4,500 years. Since then, its condition has deteriorated drastically due to the lack of adequate preservation facilities . Last October, scientists conducted a series of"non-intrusive"probes to get samples of the 4,500-year-old air in the second tomb and to photograph its contents. Expressing concern about the environment in the tomb-80Â°F, 85 % humidity-Dr. Farouk el-Baz of Boston University's Center for Remote Sensing has said that while more studies are needed, "There is a possibility we will have to go in and clean up the environment in the chamber to preserve the boat. There are no discussions about removing the boat." Frank Carr, chairman of the World Ship Trust and former director of the National Maritime Museum at Greenwich, says: "It is essential that all deci sions regarding thi s second Cheops ship be made in full consultation with the maritime heritage and marine archaeological communities." The International Congress of Maritime Museums will hold its first Australian conference at the Sydney Maritime Museum, 25 -28 September. The conference is being held in conjunction with the year-long celebrations honoring the bicentenary of the arrival of the First Fleet at Botany Bay, near Sydney. Conferees will hear presentations on Australian maritime heritage, including archaeology, ship preservation, museum development and nav al hi story. (I COMM, 1988 Conference Secretariat, Dulcie Stretton Associates, 70 Glenmore Rd., Paddington , NSW 2021, Aus.) -ti SEA HISTORY, SUMMER 1988

NATIONAL MARITIME HISTORICAL SOCIETY on their