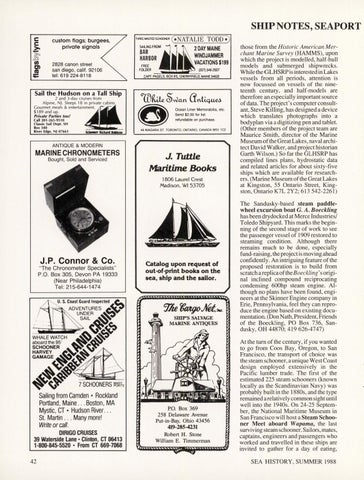 Sail the Hudson on a Tall Ship 2 and 3-day crui ses from Alpine, NJ. Sleeps 18 in private cabins Gourmet meal s & entertain~ent. Âˇ $189 and up.

those from the Historic American Merchant Marine Survey (HAMMS), upon which the project is modelled, half-hull models and submerged shipwrecks. While the GLHSRP is interested in Lakes vessels from all periods, attention is now focussed on vessels of the nineteenth century, and half-models are therefore an especially important source of data. The project's computer consultant, Steve Killing, has designed a device which translates photographs into a bodyplan via a digitizing pen and tablet. (Other members of the project team are Maurice Smith, director of the Marine Museum of the Great Lakes, naval architect David Walker, and project historian Garth Wilson.) So far the GLHSRP has compiled lines plans, hydrostatic data and related articles for about sixty-five ships which are available for researchers. (Marine Museum of the Great Lakes at Kingston, 55 Ontario Street, Kingston, Ontario K7L 2Y2; 613 542-2261) The Sandusky-based steam paddlewheel excursion boat G. A. Boeckling has been dry docked at Merce Industries/ Toledo Shipyard. This marks the beginning of the second stage of work to see the passenger vessel of 1909 restored to steaming condition. Although there remains much to be done, especially fund-raising, the project is moving ahead confidently. An intriguing feature of the proposed restoration is to build from scratch a replica of theBoeckling 's original inclined compound reciprocating condensing 600hp steam engine. Although no plans have been found, engineers at the Skinner Engine company in Erie, Pennsylvania, feel they can reproduce the engine based on existing documentation. (Don Nath, President, Friends of the Boeckling, PO Box 736, Sandusky, OH 44870; 419 626-4747) At the tum of the century, if you wanted to go from Coos Bay, Oregon, to San Francisco, the transport of choice was the steam schooner, a unique West Coast design employed extensively in the Pacific lumber trade. The first of the estimated 225 steam schooners (known locally as the Scandinavian Navy) was probably built in the 1880s, and the type remained a relatively common sight until well into the 1940s. On 24-25 September, the National Maritime Museum in San Francisco will host a Steam Schooner Meet aboard W apama, the last surviving steam schooner. Sailors, mates, captains, engineers and passengers who worked and travelled in these ships are invited to gather for a day of eating, SEA HISTORY, SUMMER 1988