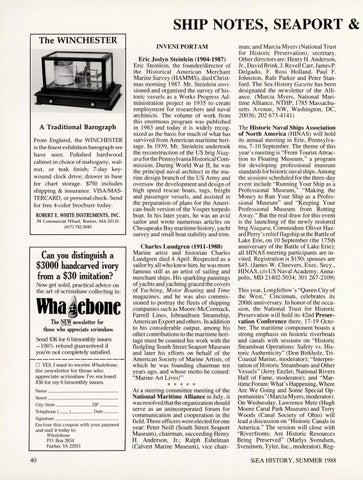 Can you distinguish a $3000 handcarved ivory from a $30 imitation? Now get solid, practical advice on the art of scrimshaw collecting in :

The NEW newsletter for those who appreciate scrimshaw.

Send $36 for 6 bimonthly issues -100% refund guaranteed if you're not completely satisfied. D YES, I want to receive Wha lebone,

INVENI PORTAM Eric Joslyn Steinlein (1904-1987) Eric Steinlein, the fo under/director of the Historical American Merchant Marine Survey (HAMMS), died Christmas morning 1987. Mr. Steinlein envisioned and organized the survey of historic vessels as a Works Progress Administration project in 1935 to create employment for researchers and naval architects. The volume of work from thi s enormous program was publi shed in 1983 and today it is widely recognized as the basis fo r much of what has survived from American maritime heritage. In 1939, Mr. Steinlein undertook the reconstruction of the US bri g Niagara forthe Pennsylvania Historical Commission. During World War II, he was the principal naval architect in the marine design branch of the US Army and oversaw the development and design of high speed rescue boats, tugs, freight and passenger vessels, and assisted in the preparation of plans fo r the American-built version of the Vosper torpedo boat. In his later years, he was an avid sailor and wrote numerous articles on Chesapeake Bay maritime hi story, yacht survey and small boat stability and trim . Charles Lundgren (1911-1988) Marine artist and historian Charles Lundgren died 4 April. Respected as a sailor by all who knew him, he was more famous sti ll as an artist of sailing and merchant ships. His sparkling paintings of yachts and yachting graced the covers of Yachting, Motor Boating and Time magazines, and he was also commi ssioned to portray the fleets of shipping companies such as Moore-McCormack, Farrell Lines, Isbrandtsen Steamship, American Export and others. In addition to his considerable output, among his other contributions to the maritime heritage must be counted hi s work with the fledgling South Street Seaport Museum and later hi s efforts on behalf of the American Society of Marine Artists, of which he was fo unding chairman ten years ago, and whose motto he coined: "Marine Art Lives! "

At a steering committee meeting of the National Maritime Alliance in July, it was resolved that the organization should serve as an unincorporated forum for communication and cooperation in the field. Three officers were elected for one year: Peter Neill (South Street Seaport Museum), chairman, succeeding Henry H. Anderson, Jr. ; Ralph Eshelman (Calvert Marine Museum), vice chair-

man; and Marcia Myers (National Trust for Historic Preservation), secretary. Other directors are: Henry H. Anderson , Jr., David Brink,J. Revell Carr,JamesP. Delgado, F. Ross Holland, Paul F. Johnston , Rafe Parker and Peter Stanford . The Sea History Gazette has been designated the newsletter of the Alliance. (Marcia Myers, National Maritime Alliance, NTHP, 1785 Massachusetts Avenue, NW, Washington, DC, 20036; 202 673-414 1) The Historic Naval Ships Association of North America (HIN AS) will hold its ann ual meeting in Erie, Pennsylvania, 7-10 September. The theme of this year's meeting is "From Tourist Attracti on to Floating Museum," a program for developing professional museum standards for historic naval ships. Among the sessions scheduled for the three-day event include "Running Your Ship as a Professional Museum," "Making . the Money to Run Your Ship as a Professional Museum" and "Keeping Your Professional Museum from Rotting Away. " But the real draw for this event is the launching of the newly restored brig Niagara, Commodore Oliver Hazard Perry's relief flagship at the Battle of Lake Erie, on 10 September (the l 75th anniversary of the Battle of Lake Erie); all HINAS meeting participants are invited. Registration is $ 150; spouses are $45. (James W. Cheevers, Exec. Secy., HIN AS, c/o US Naval Academy, Annapolis, MD 21402-5034; 301 267-2109) This year, Longfellow's "Queen City of the West," Cincinnati, celebrates its 200th anniversary. In honor of the occasion, the National Trust for Historic Preservation will hold its 42nd Preservation Conference there, 17 -19 October. The maritime component boasts a strong emphasis on historic riverboats and canals with sessions on "Historic Steamboat Operations: Safety vs. Historic Authenticity" Âˇcoon Birkholz, TriCoastal Marine, moderator); "Interpretation of Historic Steamboats and Other Vessels" (Jerry Enzler, National Rivers Hall of Fame, moderator); and "Maritime Forum: What's Happening, Where Are We Going and Some Special Opportunities" (Marcia Myers, moderator). On Wednesday, Lawrence Metz (Hugh Moore Canal Park Museum) and Terry Woods (Canal Society of Ohio) will lead a discussion on "Historic Canals in America." The session will close with "Riverfronts: Are Historic Resources Being Preserved" (Marlys Svendsen, Svendssen, Tyler, Inc., moderator) . RegS>EA HISTORY, SUMMER 1988