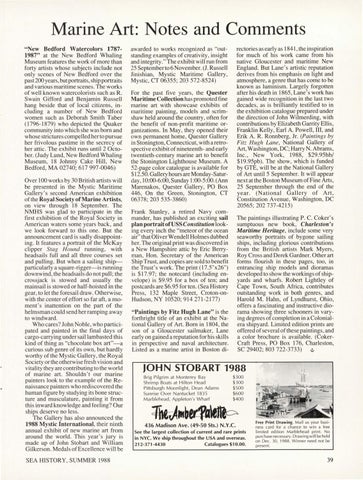 Marine Art: Notes and Comments "New Bedford Watercolors 17871987" at the New Bedford Whaling Museum features the work of more than forty artists whose subjects include not only scenes of New Bedford over the past200 years, but portraits, ship portraits and various maritime scenes. The works of well known watercolorists such as R. Swain Gifford and Benjamin Russell hang beside that of local citizens, including a number of New Bedford women such as Deborah Smith Taber (1796-1879) who depicted the Quaker community into which she was born and whose strictures compelled herto pursue her frivolous pastime in the secrecy of her attic. The exhibit runs until 2 October. (Judy Lund, New Bedford Whaling Museum, 18 Johnny Cake Hill , New Bedford, MA 02740; 617 997-0046) Over 100 works by 30 British artists will be presented in the Mystic Maritime Gallery's second American exhibition of the Royal Society of Marine Artists, on view through 18 September. The NMHS was glad to participate in the first exhibition of the Royal Society in American waters some years back, and we look forward to this one. But the announcement card is sadly disappointing. It features a portrait of the McKay clipper Stag Hound running, with headsails full and all three courses set and pulling. But when a sailing ship-particularly a square-rigger-is running downwind , the headsails do not pull; the crossjack is stowed and usually the mainsail is stowed or half-hoi sted in the gear, to let the foresail draw. Otherwise, with the center of effort so far aft, a moment's inattention on the part of the helmsman could send her ramping away to windward. Who cares? John Noble, who participated and painted in the final days of cargo-carrying under sail lambasted this kind of thing as "chocolate box art"-a curious sub genre of its own, but hardly worthy of the Mystic Gallery, the Royal Society or the otherwise fresh vision and vitality they are contributing to the world of marine art. Shouldn ' t our marine painters look to the example of the Renaissance painters who rediscovered the human figure by studying its bone structure and musculature, painting it from this inward knowledge and feeling? Our ships deserve no less. The Gallery has also announced the 1988 Mystic International, their ninth annual exhibit of new marine art from around the world. This year's jury is made up of John Stobart and William Gilkerson. Medals of Excellence will be SEA HISTORY, SUMMER 1988

rectories as early as 1841, the inspiration for much of hi s work came from his native Gloucester and maritime New England. But Lane' s artistic reputation derives from his emphasis on light and atmosphere, a genre that has come to be known as luminism. Largely forgotten after his death in 1865, Lane's work has gained wide recognition in the last two decades, as is brilliantly testified to in the exhibition catalogue prepared under the direction of John Wilmerding, with contributions by Elizabeth Garrity Ellis, Franklin Kelly, Earl A. Powell, III, and Erik A. R. Ronnberg, Jr. (Paintings by Fitz Hugh Lane, National Gallery of Art, Washington, DC; Harry N. Abrams, Inc., New York, 1988, $29.95hb/ $19.95pb). The show, which is funded by GTE, will be at the National Gallery of Art until 5 September. It will appear next at the Boston Museum of Fine Arts, 25 September through the end of the year. (National Gallery of Art, Constitution Avenue, Washington, DC 20565; 202 737-4215)

awarded to works recognized as "outstanding examples of creativity, insight and integrity." The exhibit will run from 25 September to 6 November. (J. Russell Jinishian, Mystic Maritime Gallery, Mystic, CT 06355; 203 572-8524) For the past five years, the Quester Maritime Collection has promoted fine marine art with showcase exhibits of maritime painting, models and scrimshaw held around the country, often for the benefit of non-profit maritime organizations. In May, they opened their own permanent home, Quester Gallery in Stonington, Connecticut, with a retrospective ex hi bit of nineteenth- and early twentieth-century marine art to benefit the Stonington Lighthouse Museum. A 52-page color catalogue is available for $12.50. Gallery hours are Monday-Saturday, 10:00-6:00, Sunday I :00-5 :00. (Ann Marenakos, Quester Gallery, PO Box 446, On the Green, Stonington, CT 06378; 203 535-3860) Frank Stanley, a retired Navy commander, has published an exciting sail plan portrait of USS Constitution looking every inch the "meteor of the ocean air" that Oliver Wendell Holmes dubbed her. The original print was discovered in a New Hampshire attic by Eric Berryman , Hon. Secretary of the American Ship Trust, and copies are sold to benefit the Trust's work. The print ( l 7.5"x26") is $17.97; the notecard (including envelope) is $9.95 for a box of ten; and postcards are $6.95 for ten. (Sea History Press, 132 Maple Street, Croton-onHudson , NY 10520; 914 271-2177)

The paintings illustrating P. C. Coker's sumptuous new book, Charleston's Maritime Heritage, include some very seaworthy portraits of bygone sailing ships, including glorious contributions from the British artists Mark Myers , Roy Cross and Derek Gardner. Other art forms flourish in these pages, too, in entrancing ship models and dioramas developed to show the workings of shipyards and wharfs. Robert Lightley of Cape Town, South Africa, contributes outstanding work in both genres , and Harold M. Hahn, of Lyndhurst, Ohio, offers a fascinating and instructive diorama showing three schooners in varying degrees of completion in a Colonialera shipyard. Limited edition prints are offered of several of these paintings, and a color brochure is available. (CokerCraft Press, PO Box 176, Charleston, .t SC 29402; 803 722-3733)

"Paintings by Fitz Hugh Lane" is the forthright title of an exhibit at the National Gallery of Art. Born in 1804, the son of a Gloucester sailmaker, Lane early on gained a reputation for his skills in perspective and naval architecture. Listed as a marine artist in Boston di-