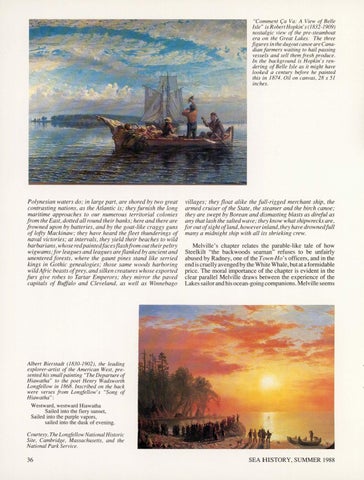 "Comment <;a Va: A View of Belle Isle" is Robert Hopkin ' s (I832-I909) nostalgic view of the pre-steamboat era on the Great Lakes. The three figures in the dugout canoe are Canadian farmers waiting to hail passing vessels and sell them fresh produce. In the background is Hopkin' s rendering of Belle Isle as it might have looked a century before he painted this in 1874. Oil on canvas, 28 x 51 inches.

Polynesian waters do; in large part, are shored by two great villages; they float alike the full-rigged merchant ship, the contrasting nations, as the Atlantic is; they furnish the long armed cruiser of the State, the steamer and the birch canoe; maritime approaches to our numerous territorial colonies they are swept by Borean and dismasting blasts as direful as from the East, dotted all round their banks; here and there are any that lash the salted wave; they know what shipwrecks are, frowned upon by batteries, and by the goat-like craggy guns for out of sight ofland, however inland, they have drowned full of lofty Mackinaw; they have heard the fleet thunderings of many a midnight ship with all its shrieking crew. naval victories; at intervals, they yield their beaches to wild barbarians, whose red paintedfaces flash from out their peltry Melville's chapter relates the parable-like tale of how wigwams ;for leagues and leagues are flanked by ancient and Steelkilt "the backwoods seaman" refuses to be unfairly unentered forests, where the gaunt pines stand like serried abused by Radney, one of the Town-Ho's officers, and in the kings in Gothic genealogies; those same woods harboring end is cruelly avenged by the White Whale, but at a formidable wild Afric beasts ofprey, and silken creatures whose exported price. The moral importance of the chapter is evident in the furs give robes to Tartar Emperors; they mirror the paved clear parallel Melville draws between the experience of the capitals of Buffalo and Cleveland, as well as Winnebago Lakes sailor and his ocean-going companions. Melville seems

Albert Bierstadt (1830-1902), the leading explorer-artist of the American West, presented his small painting "The Departure of Hiawatha" to the poet Henry Wadsworth Longfellow in 1868. Inscribed on the back were verses from Longfellow's "Song of Hiawatha": Westward, westward Hiawatha Sailed into the fiery sunset, Sailed into the purple vapors, sailed into the dusk of evening. Courtesy, The Longfellow National Historic Site, Cambridge, Massachusetts, and the National Park Service.