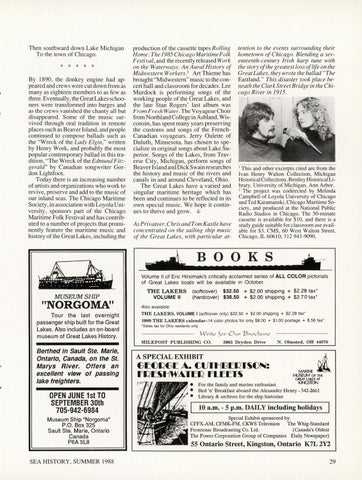 Then southward down Lake Michigan To the town of Chicago.

* * * * * By 1890, the donkey engine had appeared and crews were cut down from as many as eighteen members to as few as three. Eventually, the Great Lakes schooners were transformed into barges and as the crews vanished the chanty all but disappeared. Some of the music survived through oral tradition in remote places such as Beaver Island, and people continued to compose ballads such as the "Wreck of the Lady Elgin," written by Henry Work, and probably the most popular contemporary ballad in this tradition, "The Wreck of the Edmund Fitzgerald" by Canadian songwriter Gordon Lightfoot. Today there is an increasing number of artists and organizations who work to revive, preserve and add to the music of our inland seas. The Chicago Maritime Society, in association with Loyola University, sponsors part of the Chicago Maritime Folk Festival and has contributed to a number of projects that prominently feature the maritime music and history of the Great Lakes, including the

production of the cassette tapes Rolling

Home: The 1985 Chicago Maritime Folk F es ti val, and the recently released Work on the Waterways: An Aural History of Midwestern Workers. 2 Art Thieme has brought "Midwestern" music to the concert hall and classroom for decades. Lee Murdock is performing songs of the working people of the Great Lakes, and the late Stan Rogers' last album was From Fresh Water. The Voyageur Choir from Northland College in Ashland, Wisconsin, has spent many years preserving the customs and songs of the FrenchCanadian voyageurs. Jerry Oulette of Duluth, Minnesota, has chosen to specialize in original songs about Lake Superior. Songs of the Lakes, from Traverse City, Michigan, perform songs of Beaver Island and Dick Swain researches the history and music of the rivers and canals in and around Cleveland, Ohio. The Great Lakes have a varied and singular maritime heritage which has been and continues to be reflected in its own special music. We hope it continues to thrive and grow. '1>

As Privateer, ChrisandTomKastle have concentrated on the sailing ship music of the Great Lakes, with particular at-

tention to the events surrounding their hometown of Chicago. Blending a seventeenth-century Irish harp tune with the story of the greatest loss of life on the Great Lakes, they wrote the ballad "The Eastland. " This disaster took place beneath the Clark Street Bridge in the Chicago River in 1915.

1 This and other excerpts cited are from the Ivan Henry Walton Collection, Michigan Historical Collections, Bentley Historical Library, University of Michigan, Ann Arbor. 2 The project was codirected by Melinda Campbell of Loyola University of Chicago and Ted Karamanski, Chicago Maritime Society, and produced at the National Public Radio Studios in Chicago. The SO-minute cassette is available for $10, and there is a study guide suitable for classroom use available for $3. CMS , 60 West Walton Street, Chicago, IL 6061 O; 3 12 943-9090.

Of THE GREAT LAKES AT