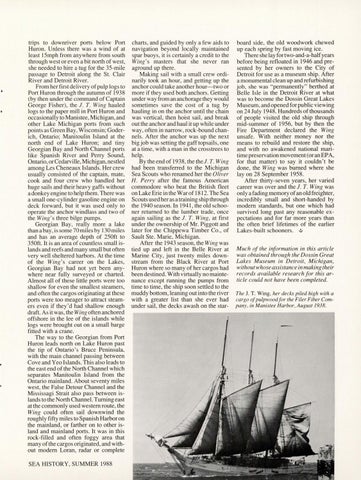 trips to downriver ports below Port Huron. Unless there was a wind of at least 15mph from anywhere from south through west or even a bit north of west, she needed to hire a tug for the 35-mile passage to Detroit along the St. Clair River and Detroit River. From her first delivery of pulp logs to Port Huron through the autumn of 1938 (by then under the command of Captain George Fisher), the J. T. Wing hauled logs to the paper mill in Port Huron and occasionally to Manistee, Michigan, and other Lake Michigan ports from such points as Green Bay, Wisconsin; Goderich, Ontario; Manitoulin Island at the north end of Lake Huron; and tiny Georgian Bay and North Channel ports like Spanish River and Perry Sound, Ontario, or Cedarville, Michigan, nestled among Les Cheneaux Islands. Her crew usually consisted of the captain, mate, cook and four crew who handled her huge sails and their heavy gaffs without a donkey engine to help them. There was a small one-cylinder gasoline engine on deck forward, but it was used only to operate the anchor windlass and two of the Wing ' s three bilge pumps. Georgian Bay, really more a lake than a bay, is some 70 miles by 130 miles and has an average depth of 250ft to 350ft. It is an area of countless small islands and reefs and many small but often very well sheltered harbors. At the time of the Wing's career on the Lakes, Georgian Bay had not yet been anywhere near fully surveyed or charted. Almost all of these little ports were too shallow for even the smallest steamers, and often the cargos originating at these ports were too meager to attract steamers even if they'd had shallow enough draft. As it was, the Wing often anchored offshore in the lee of the islands while logs were brought out on a small barge fitted with a crane. The way to the Georgian from Port Huron leads north on Lake Huron past the tip of Ontario's Bruce Peninsula, with the main channel passing between Cove and Yeo Islands. This also leads to the east end of the North Channel which separates Manitoulin Island from the Ontario mainland. About seventy miles west, the False Detour Channel and the Mississagi Strait also pass between islands to the North Channel. Turning east at the commonly used western route, the Wing could often sail downwind the roughly fifty miles to Spanish Harbor on tile mainland, or farther on to other island and mainland ports. It was in this rock-filled and often foggy area that many of the cargos originated, and without modem Loran, radar or complete SEA HISTORY, SUMMER 1988

charts, and guided by only a few aids to navigation beyond locally maintained spar buoys, it is certainly a credit to the Wing's masters that she never ran aground up there. Making sail with a small crew ordinarily took an hour, and getting up the anchor could take another hour-two or more if they used both anchors. Getting under way from an anchorage they would sometimes save the cost of a tug by hauling in on the anchor until the chain was vertical, then hoist sail, and break out the anchor and haul it up while under way, often in narrow, rock-bound channels. After the anchor was up the next big job was setting the gaff topsails, one at a time, with a man in the crosstrees to help. By theend of 1938, the theJ. T. Wing had been transferred to the Michigan Sea Scouts who renamed her the Oliver H. Perry after the famous American commodore who beat the British fleet on Lake Erie in the War of 1812. The Sea Scouts used her as a training ship through the 1940 season. In 1941, the old schooner returned to the lumber trade, once again sailing as the J. T. Wing, at first under the ownership of Mr. Piggott and later for the Chippewa Timber Co., of Sault Ste. Marie, Michigan. After the 1943 season, the Wing was tied up and left in the Belle River at Marine City, just twenty miles downstream from the Black River at Port Huron where so many of her cargos had been destined. With virtually no maintenance except running the pumps from time to time, the ship soon settled to the muddy bottom, leaning out into the river with a greater list than she ever had under sail, the decks awash on the star-

board side, the old woodwork chewed up each spring by fast moving ice. There she lay fortwo-and-a-half years before being refloated in 1946 and presented by her owners to the City of Detroit for use as a museum ship. After a monumental clean up and refurbishing job, she was "permanently" berthed at Belle Isle in the Detroit River at what was to become the Dossin Great Lakes Museum, and opened for public viewing on 24 July 1948. Hundreds of thousands of people visited the old ship through mid-summer of 1956, but by then the Fire Department declared the Wing unsafe. With neither money nor the means to rebuild and restore the ship, and with no awakened national maritime preservation movement (or an EPA, for that matter) to say it couldn't be done, the Wing was burned where she lay on 28 September 1958. After thirty-seven years, her varied career was over and the J. T. Wing was only afading memory of an old freighter, incredibly small and short-handed by modem standards, but one which had survived long past any reasonable expectations and for far more years than the often brief lifetimes of the earlier Lakes-built schooners. .!>

Much of the information in this article was obtained through the Dossi!J Great Lakes Museum in Detroit, Michigan , without whose assistance in making their records available research for this article could not have been completed. The 1. T. Wing, her decks piled high with a cargo of pulpwood for the Filer Fiber Company , in Manistee Harbor, August 1938.