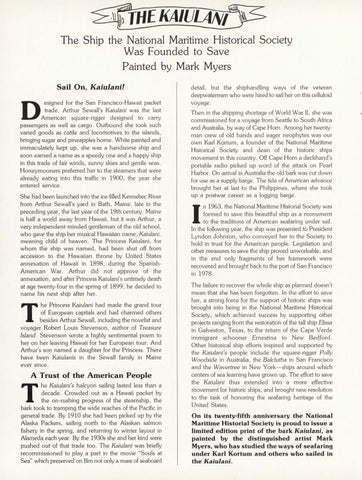 ~f KAIUUN1'j> The Ship the National Maritime Historical Society Was Founded to Save Painted by Mark Myers Sail On, Kaiulani! esigned for the San Francisco-Hawaii packet trade , Arthur Sewall's Kaiulani was the last American square-rigger designed to carry passengers as well as cargo. Outbound she took such varied goods as cattle and locomotives to the islands, bringing sugar and pineapples home . White painted and immaculately kept up, she was a handsome ship and soon earned a name as a speedy one and a happy ship in this trade of fair winds, sunny skies and gentle seas. Honeymooners preferred her to the steamers that were already eating into this traffic in 1900, the year she entered service.

She had been launched into the ice-filled Kennebec River from Arthur Sewall's yard in Bath , Maine , late in the preceding year , the last year of the 19th century. Maine is half a world away from Hawaii , but it was Arthur , a very independent-minded gentleman of the old school, who gave the ship her musical Hawaiian name , Kaiulani, meaning child of heaven . The Princess Kaiulani, for whom the ship was named , had been shut off from accession to the Hawaiian throne by United States annexation of Hawaii in 1898, during the SpanishAmerican War. Arthur did not approve of the annexation , and after Princess Kaiulani's untimely death at age twenty-four in the spring of 1899, he decided to name his next ship after her . he Princess Kaiulani had made the grand tour of European capitals and had charmed others besides Arthur Sewall, including the novelist and voyager Robert Louis Stevenson , author of Treasure Island . Stevenson wrote a highly sentimental poem to her on her leaving Hawaii for her European tour . And Arthur's son named a daughter for the Princess . There have been Kaiulanis in the Sewall family in Maine ever since.

A Trust of the American People he Kaiulani's halcyon sailing lasted less than a decade. Crowded out as a Hawaii packet by the on-rushing progress of the steamship, the bark took to tramping the wide reaches of the Pacific in general trade. By 1910 she had been picked up by the Alaska Packers, sailing north to the Alaskan salmon fishery in the spring , and returning to winter layout in Alameda each year. By the 1930s she and her kind were pushed out of that trade too . The Kaiulani was briefly recommissioned to play a part in the movie "Souls at Sea" which preserved on film not only a mass of seaboard

detail , but the shiphandling ways of the veteran deepwatermen who were hired to sail her on this celluloid voyage . Then in the shipping shortage of World War II , she was commissioned for a voyage from Seattle to South Africa and Australia, by way of Cape Horn . Among her twentyman crew of old hands and eager neophytes was our own Karl Kortum , a founder of the National Maritime Historical Society and dean of the historic ships movement in this country. Off Cape Horn a deckhand's portable radio picked up word of the attack on Pearl Harbor. On arrival in Australia the old bark was cut down for use as a supply barge . The tide of American advance brought her at last to the Philippines , where she took up a postwar career as a logging barge. n 1963, the National Maritime Historial Society was formed to save this beautiful ship as a monument to the traditions of American seafaring under sail. In the following year, the ship was presented to President Lyndon Johnson , who conveyed her to the Society to hold in trust for the American people. Legislation and other measures to save the ship proved unworkable , and in the end only fragments of her framework were recovered and brought back to the port of San Francisco in 1978 .

The failure to recover the whole ship as planned doesn't mean that she has been forgotten . In the effort to save her , a strong force for the support of historic ships was brought into being in the National Maritime Historical Society , which achieved success by supporting other projects ranging from the restoration of the tall ship Elissa in Galveston, Texas , to the return of the Cape Verde immigrant schooner Ernestina to New Bedford . Other historical ship efforts inspired and supported by the Kaiulani's people include the square-rigger Polly Woodside in Australia , the Balclutha in San Francisco and the Wavertree in New York-ships around which centers of sea learning have grown up. The effort to save the Kaiulani thus extended into a more effective movement for historic ships , and brought new resolution to the task of honoring the seafaring heritage of the United States .

On its twenty-fifth anniversary the National Maritime Historial Society is proud to issue a limited edition print of the bark Kaiulani, as painted by the distinguished artist Mark Myers, who has studied the ways of seafaring under Karl Kortum and others who sailed in the Kaiulani.