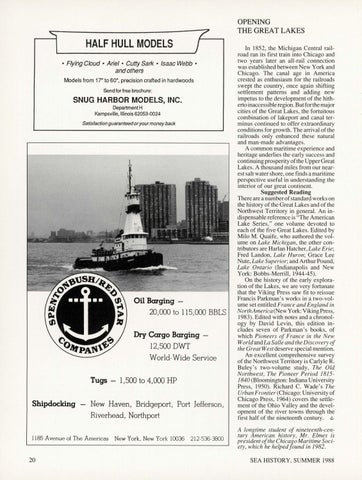 HALF HULL MODELS • Flying Cloud • Ariel • Cutty Sark • Isaac Webb • and others Models from 17" to 60", precision crafted in hardwoods Send for free brochure:

In 1852, the Michigan Central railroad ran its first train into Chicago and two years later an all-rail connection was established between New York and Chicago. The canal age in America crested as enthusiasm for the railroads swept the country, once again shifting settlement patterns and adding new impetus to the development of the hitherto inaccessible region.But for the major cities of the Great Lakes, the fortuitous combination of lakeport and canal terminus continued to offer extraordinary conditions for growth. The arrival of the railroads only enhanced these natural and man-made advantages. A common maritime experience and heritage underlies the early success and continuing prosperity of the Upper Great Lakes. A thousand miles from our nearest salt water shore, one finds a maritime perspective useful in understanding the interior of our great continent. Suggested Reading There are a number of standard works on the history of the Great Lakes and of the Northwest Territory in general. An indispensable reference is "The American Lake Series," one volume devoted to each of the five Great Lakes. Edited by Milo M. Quaife, who authored the volume on Lake Michigan, the other contributors are Harlan Hatcher, Lake Erie; Fred Landon, Lake Huron; Grace Lee Nute, Lake Superior; and Arthur Pound, Lake Ontario (Indianapolis and New York: Bobbs-Merrill , 1944-45). On the history of the early exploration of the Lakes, we are very fortunate that the Viking Press saw fit to reissue Francis Parkman's works in a two-volume set entitled France and England in North America (New York: Viking Press, 1983). Edited with notes and a chronology by David Levin, this edition includes seven of Parkman's books, of which Pioneers of France in the New World and La Salle and the Discovery of the Great West deserve special mention. An excellent comprehensive survey of the Northwest Territory is Carlyle R. Buley's two-volume study , The Old Northwest, The Pioneer Period 18151840 (Bloomington: Indiana University Press, 1950). Richard C. Wade 's The Urban Frontier (Chicago: University of Chicago Press, 1964) covers the settlement of the Ohio Valley and the development of the river towns through the first half of the nineteenth century. .!> A longtime student of nineteenth-cen_tury American history, Mr. Elmes is president of the Chicago Maritime Society, which he helped found in 1982. SEA HISTORY, SUMMER 1988