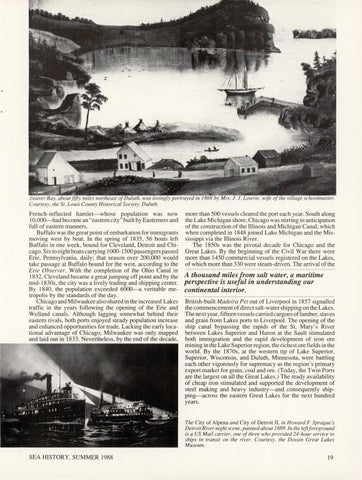 French-inflected hamlet-whose population was now more than 500 vessels cleared the port each year. South along l 0,000--had become an "eastern city" built by Easterners and the Lake Michigan shore, Chicago was stirring in anticipation of the construction of the Illinois and Michigan Canal, which full of eastern manners. Buffalo was the great point of embarkation for immigrants when completed in 1848 joined Lake Michigan and the Mismoving west by boat. In the spring of 1835, 56 boats left sissippi via the Illinois River. Buffalo in one week, bound for Cleveland, Detroit and ChiThe 1850s was the pivotal decade for Chicago and the cago. Six to eight boats carrying 1000-1500 passengers passed Great Lakes. By the beginning of the Civil War there were Erie, Pennsylvania, daily; that season over 200,000 would more than 1450 commercial vessels registered on the Lakes, take passage at Buffalo bound for the west, according to the of which more than 330 were steam-driven. The arrival of the Erie Observer. With the completion of the Ohio Canal in 1832, Cleveland became a great jumping off point and by the A thousand miles from salt water, a maritime mid- l 830s, the city was a lively trading and shipping center. perspective is useful in understanding our By 1840, the population exceeded 6000--a veritable me- continental interior. tropolis by the standards of the day. Chicago and Milwaukee also shared in the increased Lakes British-built Madeira Pet out of Liverpool in 1857 signalled traffic in the years following the opening of the Erie and the commencement of direct salt-water shipping on the Lakes. Welland canals. Although lagging somewhat behind their The next year, fifteen vessels carried cargoes oflumber, staves eastern rivals, both ports enjoyed steady population increase and grain from Lakes ports to Liverpool. The opening of the and enhanced opportunities for trade. Lacking the early loca- ship canal bypassing the rapids of the St. Mary 's River tional advantage of Chicago, Milwaukee was only mapped between Lakes Superior and Huron at the Sault stimulated and laid out in 1833. Nevertheless, by the end of the decade, both immigration and the rapid development of iron ore mining in the Lake Superior region, the richest ore fields in the world. By the 1870s, at the western tip of Lake Superior, Superior, Wisconsin, and Duluth, Minnesota, were battling each other vigorously for supremacy as the region 's primary export market for grain, coal and ore. (Today, the Twin Ports are the largest on all the Great Lakes.) The ready availability of cheap iron stimulated and supported the development of steel making and heavy industry-and consequently shipping-across the eastern Great Lakes for the next hundred years.

The City of Alpena and City of Detroit II, in Howard F. Sprague's Detroit River night scene, painted about 1889. ln the left foreground is a US Mail carrier, one of three who provided 24-hour service to ships in transit on the river. Courtesy, the Dossin Great Lakes Museum.