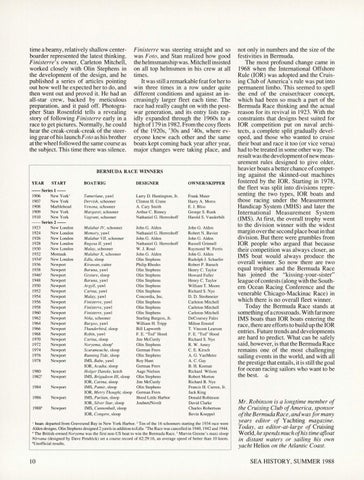 time a beamy, relatively shallow centerboarder represented the latest thinking. Finisterre's owner, Carleton Mitchell, worked closely with Olin Stephens in the development of the design, and he published a series of articles pointing out how well he expected her to do, and then went out and proved it. He had an all-star crew, backed by meticulous preparation, and it paid off. Photographer Stan Rosenfeld tells a revealing story of following Finisterre early in a race to get pictures. Normally, he could hear the creak-creak-creak of the steering gear of his launch F oto as his brother at the wheel followed the same course as the subject. This time there was silence.

Finisterre was steering straight and so was Foto, and Stan realized how good the helmsmanship was. Mitchell insisted on all top helmsmen in his crew at all times. It was sti II a remarkable feat for her to win three times in a row under quite different conditions and against an increasingly larger fleet each time. The race had really caught on with the postwar generation, and its entry lists rapidly expanded through the 1960s to a high of 179 in 1982. From the cosy fleets of the 1920s, '30s and '40s, where everyone knew each other and the same boats kept coming back year after year, major changes were taking place, and

' boats departed from Gravesend Bay in New York Harbor. 2 Ten of the 16 schooners starting the 1934 race were Alden designs. Olin Stephens designed 2 yaw ls in addition toEdlu. 3 The Race was cancelled in 1940, 1942 and 1944. 4 The British-owned Noryema was the first non-US boat to wi n the Bermuda Race. 3 Marvin Greene's maxi sloop Nirvana (designed by Dave Pendrick) set a course record of 62:29: 16, an average speed of better than I 0 knots. ' Unofficial results.

not only in numbers and the size of the festivities in Bermuda. The most profound change came in 1968 when the International Offshore Rule (IOR) was adopted and the Cruising Club of America's rule was put into permanent limbo. This seemed to spell the end of the cruiser/racer concept, which had been so much a part of the Bermuda Race thinking and the actual reason for its revival in 1923. With the constraints that designs best suited for IOR competition put on naval architects, a complete split gradually developed, and those who wanted to cruise their boat and race it too (or vice versa) had to be treated in some other way. The result was the development of new measurement rules designed to give older, heavier boats a better chance of competing against the skinned-out machines fostered by the IOR. Starting in 1978, the fleet was split into divisions representing the two types, IOR boats and those racing under the Measurement Handicap System (MHS) and later the International Measurement System (IMS). At first, the overall trophy went to the division winner with the widest margin over the second place boat in that division. But there were grumbles from IOR people who argued that because their competition was always closer, an IMS boat would always produce the overall winner. So now there are two equal trophies and the Bermuda Race has joined the "ki ssing-your-sister" league of contests (along with the Southern Ocean Racing Conference and the venerable Chicago-Mackinac Race) in which there is no overall fleet winner. Today the Bermuda Race stands at something of a crossroads. With farm ore IMS boats than IOR boats entering the race, there are efforts to build up the IOR entries. Future trends and developments are hard to predict. What can be safely said, however, is that the Bermuda Race remains one of the most challenging sailing events in the world, and with all the prestige that entails, it is still the goal for ocean racing sailors who want to be the best. <!>

Mr. Robinson is a longtime member of the Cruising Club of America, sponsor ofthe Bermuda Race, and was for many years editor of Yachting magazine. Today, as editor-at-large of Cruising World, he spends much ofhis time afloat in distant waters or sailing his own yacht Helios on the Atlantic Coast. SEA HISTORY, SUMMER 1988