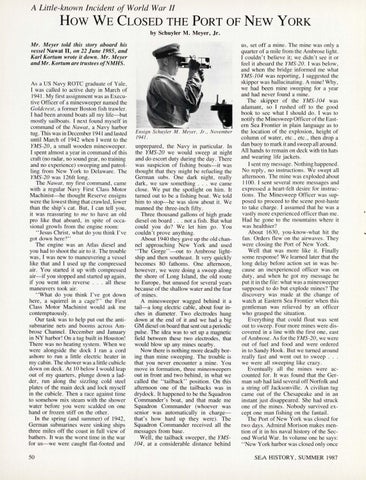 How WE CLOSED THE PORT OF NEW YoRK by Schuyler M. Meyer, Jr. Mr. Meyer told this story aboard his vessel Nawat II, on 22 June 1985, and Karl Kortum wrote it down . Mr. Meyer and Mr. Kortum are trustees ofNMHS.

As a US Navy ROTC graduate of Yale, I was called to acti ve duty in March of 194 1. My first assignment was as Executi ve Officer of a minesweeper named the Goldcrest , a former Boston fish traw ler. I had been around boats all my life- but mostly sai lboats . I next fo und myself in command of the Nawat, a Navy harbor tug. This was in December 194 1 and lasted until March of 1942 when I went to the YMS-20 , a small wooden minesweeper. I spent almost a year in command of th is craft (no radar, no sound gear, no training and no experience) sweeping and patrolling from New York to Delaware . The YMS-20 was 126ft long . The Nawar, my first command , came with a regul ar Navy First Class Motor Machinist- he thought Reserve ensigns were the lowest thing that crawled , lower than the ship ' s cat. But , I can tell you, it was reassuring to me to have an old pro like that aboard , in spite of occasional grow ls from the engine roo m: " Jesus Christ, what do yo u think I' ve got dow n here?' ' The engine was an Atlas diesel and you had to shoot the air to it. The trouble was, I was new to maneuvering a vessel like that and I used up the compressed air. You started it up with compressed air- if you stopped and started up again , if you went into reverse . . . all these maneuvers took air. " What do you think I've got down here , a squirrel in a cage?' ' the First Class Motor Machinist would ask me contemptuously . Our task was to help put out the antisubmarine nets and booms across Ambrose Channel. December and January in NY harbor! On a tug built in Houston! There was no heating system. When we were alongs ide the dock I ran a cord as hore to run a little electric heater in my cabin . The shower was a little cubicle down on deck . At 10 below I would leap out of my quarters , plunge down a ladder, run along the sizzling cold steel plates of the main deck and lock myself in the cubicle . Then a race against time to somehow mi x steam with the shower water before yo u were scalded on one hand or frozen stiff on the other. In the spring (and summer) of 1942 , German submarines were sinking ships three miles off the coast in full view of bathers. It was the worst time in the war for us-we were caught flat-footed and

unprepared , the Navy in particul ar. In the YMS-20 we wo uld sweep at night and do escort duty during the day . There was suspicion of fi shing boats-it was thought that they might be refu eling the German subs. One dark night , reall y dark , we saw something .. . we came close. We put the spotli ght on him . It turned out to be a fi shing boat. We told him to stop-he was slow about it. We manned the three-inch fifty . Three thousand gallons of high grade diesel on board . .. not a fish. But what could you do? We let him go. You couldn ' t prove anything . About 1940 they gave up the old channel approaching New York and used " The Gorge" --out to Ambrose lightship and then southeast. It very quickly becomes 80 fathoms. One afternoon , however, we were doing a sweep along the shore of Long Island , the old route to Europe , but unused for several years because of the shallow water and the fear of mines . A minesweeper wagged behind it a tail-a long electric cable, about four inches in diameter. Two electrodes hung down at the end of it and we had a big GM diesel on board that sent out a periodic pulse. The idea was to set up a magnetic field between these two electrodes , that would blow up any mines nearby. Now there is nothing more deadl y boring than mine sweeping . The trouble is that you never encounter a mine . You move in formation , three minesweepers out in front and two behind , in what we called the " tailback " position . On this afternoon one of the tai lbacks was in drydock. It happened to be the Squadron Commander's boat , and that made me Squadron Commander (whoever was senior was automatically in chargethat ' s how hard up they were) . The Squadron Commander received all the messages from base. Well , the tailback sweeper, the YMS104 , at a considerable distance behind

us, set off a mine . The mine was onl y a quarter of a mile from the Ambrose li ght. I couldn 't believe it; we didn ' t see it or fee l it aboard the YMS-20 . I was below , and when the bridge informed me what YMS-104 was reporting, 1 suggested the skipper was hallucinating . A mine' Why, we had been mine sweeping for a year and had never found a mine. The skipper of the YMS-104 was adamant , so I rushed off to the good book to see what I should do. I was to notify the Minesweep Officer of the Eastern Sea Frontier in plain language as to the location of the explosion , height of column of water, etc., etc ., then drop a dan buoy to mark it and sweep all around. All hands to remain on deck with tin hats and wearing life jackets. I sent my message. Nothing happened. No reply , no in structions. We swept all afternoon . The mine was exploded about 11 00. I sent several more messages and expressed a heart-felt desire for instructions. The Minesweep Officer was supposed to proceed to the scene post-haste to take c harge. I assumed that he was a vastly more experienced officer than me. Had he gone to the mountains where it was healthier? Abo ut 1630 , you-know-what hit the fa n. Orders flew on the airwaves. They were closing the Port of New York . Well that was more like it. Finally some response! We learned later that the long delay before action set in was because an inexperienced officer was on duty, and when he got my message he put it in the file: what was a minesweeper supposed to do but explode mines? The di scovery was made at the change of watch at Eastern Sea Frontier when this gentleman was relieved by an officer who grasped the situation . Everything that could flo at was sent out to sweep. Four more mines were di scovered in a line with the first one , east of Ambrose. As for the YMS-20, we were out of fue l and food and were ordered in to Sandy Hook . But we turned around reall y fast and went out to sweep . . . we were all sweeping like crazy. Eventually all the mines were accounted for. lt was found that the German sub had laid several off Norfolk and a string off Jacksonville . A civilian tug came out of the Chesapeake and in an instant just disappeared. She had struck one of the mines. Nobody survived except one man fi shing on the fantail . The Port of New York was closed for two days. Admiral Mori son makes mention of it in his naval hi story of the Second World War. In volume one he says: ' 'New York harbor was closed only once SE1A HISTORY , SUMMER 1987

7 THE OLDEST SHIP IN THE WAR, Ed Dennis • 9 THE SEAPORT EXPERIENCE, Peter Stanford • 11 THE USS CONSTITUTION: REACHING OUT OVER THE HORIZON,...

7 THE OLDEST SHIP IN THE WAR, Ed Dennis • 9 THE SEAPORT EXPERIENCE, Peter Stanford • 11 THE USS CONSTITUTION: REACHING OUT OVER THE HORIZON,...