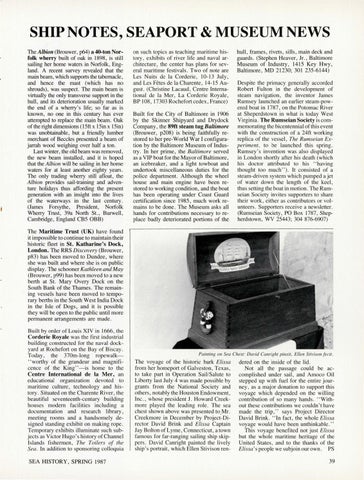 SHIP NOTES, SEAPORT &amp; MUSEUM NEWS The Albion (Brouwer, p64) a 40-ton Norfolk wherry built of oak in 1898, is still sailing her home waters in Norfolk, England. A recent survey revealep that the main beam, which supports the tabernacle, and hence the mast (which has no shrouds), was suspect. The main beam is virtually the only transverse support in the hull , and its deterioration usually marked the end of a wherry&#39; s life; so far as is known, no one in this century has ever attempted to replace the main beam. Oak of the right dimensions (lSft x I Sin x I Sin) was unobtainable , but a friendly lumber merchant of Beccles presented a beam of jarrah wood weighing over half a ton. Last winter, the old beam was removed, the new beam installed, and it is hoped that the Albion will be sailing in her home waters for at least another eighty years. The only trading wherry still afloat, the Albion provides sail-training and adventure holidays thus affordi ng the present generation with an insight into the lives of the waterways in the last century. (James Forsythe, President, Norfolk Wherry Trust, 39a North St. , Burwell , Cambridge, England CBS OBB)

on such topics as teaching maritime history , exhibits of river life and naval architecture, the center has plans for several maritime festivals . Two of note are Les Nuits de la Corderie , 10-13 July, and Les Fetes de la Charente, 14-1 S August. (Chri stine Lacaud, Centre International de la Mer, La Corderie Royale , BP 108 , 17303 Rochefort cedex , France) Built for the City of Baltimore in 1906 by the Skinner Shipyard and Drydock Company , the 89ft steam tug Baltimore (Brouwer, p208) is being faithfull y restored to her pre-World War I configuration by the Baltimore Museum of Industry . In her prime, the Baltimore served as a VIP boat for the Mayor of Baltimore, an icebreaker, and a light towboat and undertook miscellaneous duties for the police department. Although the wheel house and main engine have been restored to working condition , and the boat has been operating under Coast Guard certification since l 98S , much work remains to be done. The Museum asks all hands for contributions necessary to replace badly deteriorated portions of the

hull , frames , rivets, sill s, main deck and guards. (Stephen Heaver, Jr. , Baltimore Museum of Industry , 141S Key Hwy , Baltimore, MD 21230; 301 23S-6144) Despite the primacy generally accorded Robert Fulton in the development of steam navigation , the inventor James Rumsey launched an earlier steam-powered boat in 1787, on the Potomac River at Sheperdstown in what is today West Virginia . The Rumseian Society is commemorating the bicentennial of this event with the construction of a 24ft working replica of the vessel , The Rumseian Experiment, to be launched this spring . Rumsey &#39;s invention was also displayed in London shortly after hi s death (which his doctor attributed to his &quot; having thought too much&quot;). It consisted of a steam-driven system which pumped a jet of water down the length of the keel , thus setting the boat in motion. The Rumseian Society invites supporters to share their work , either as contributors or volunteers. Supporters receive a newsletter. (Rumseian Society, PO Box 1787, Shepherdstown, WV 2S443 ; 304 876-6907)

The Maritime Trust (UK) have found it impossible to continue to maintain their historic fleet in St. Katharine&#39;s Dock, London. The RRS Discovery (Brouwer , p83) has been moved to Dundee, where she was built and where she is on public display . The schooner Kathleen and May (Brouwer, p99) has been moved to a new berth at St. Mary Overy Dock on the South Bank of the Thames . The remaining vessels have been moved to temporary berths in the South West India Dock in the Isle of Dogs, and it is possible they will be open to the public until more permanent arrangements are made . Built by order of Louis XIV in 1666 , the

Corderie Royale was the first industrial building constructed for the naval dockyard at Rochefort on the Bay of Biscay. Today , the 370m-long ropewalk&quot; worthy of the grandeur and magnificence of the King &quot; -is home to the Centre International de la Mer, an educational organization devoted to maritime culture , technology and history . Situated on the Charente River, the beautiful seventeenth-century building houses modern facilities including a documentation and research library , meeting rooms and a handsomely designed standing exhibit on making rope. Temporary exhibits illuminate such subjects as Victor Hugo &#39; s history of Channe l Islands fishermen, The Toilers of the Sea. In addition to sponsoring colloquia SEA HISTORY , SPRING 1987

The voyage of the historic bark Elissa from her homeport of Galveston , Texas, to take part in Operation Sail/Salute to Liberty last Jul y 4 was made possible by grants from the National Society and others, notably the Houston Endowment , Inc. , whose president J . Howard Creekmore played the leading ro le . The sea chest shown above was presented to,Mr. Creekmore in December by Project-Director David Brink and Elissa Captain Jay Bolton of Lyme , Connecticut, a town famous for far-ranging sailing ship skippers . David Canright painted the li vely ship &#39;s portrait , which Ellen Stivison ren-

dered on the inside of the lid . Not all the passage could be accomplished under sail , and Amoco Oil stepped up with fuel for the entire journey , as a major donation to support this voyage which depended on the willing contribution of so many hands. &quot; Without these contributions we cou ldn &#39; t have made the trip ,&quot; says Project Director David Brink. &quot; In fact , the whole Elissa voyage would have been unthinkable .&quot; This voyage benefited not just Elissa but the whole maritime heritage of the United States , and to the thanks of the Elissa&#39; s people we subjoin our own . PS 39