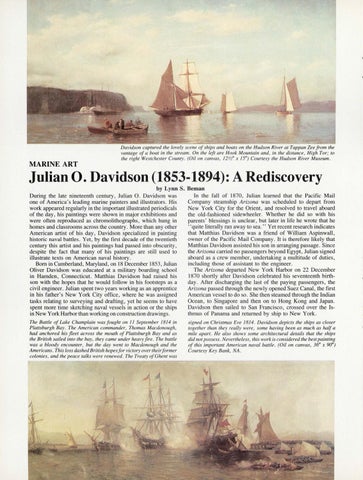 Davidson captured the lovely scene of ships and boats on the Hudson River at Tappan Zee from the vantage of a boat in the stream. On the left are Hook Mountain and, in the distance, High Tor; to the right Westchester County. (Oil on canvas, 121/i&#39;&#39; x 15&#39;&#39;) Courtesy the Hudson River Museum .

Julian 0. Davidson (1853-1894): A Rediscovery by Lynn S. Beman In the fall of 1870, Julian learned that the Pacific Mail During the late nineteenth century , Julian 0 . Davidson was Company steamship Arizona was scheduled to depart from one of America&#39;s leading marine painters and illustrators. His work appeared regularly in the important illustrated periodicals New York City for the Orient, and resolved to travel aboard the old-fashioned sidewheeler. Whether he did so with his of the day, his paintings were shown in major exhibitions and were often reproduced as chromolithographs, which hung in parents&#39; blessings is unclear, but later in life he wrote that he &quot; quite literally ran away to sea.&quot; Yet recent research indicates homes and classrooms across the country. More than any other that Matthias Davidson was a friend of William Aspinwall, American artist of his day , Davidson specialized in painting owner of the Pacific Mail Company. It is therefore likely that historic naval battles. Yet, by the first decade of the twentieth Matthias Davidson assisted his son in arranging passage. Since century this artist and his paintings had passed into obscurity, the Arizona carried no passengers beyond Egypt, Julian signed despite the fact that many of his paintings are sti ll used to aboard as a crew member, undertaking a multitude of duties , illustrate texts on American naval history. including those of assistant to the engineer. . Born in Cumberland, Maryland, on 18 December 1853, Julian The Arizona departed New York Harbor on 22 December Oliver Davidson was educated at a military boarding school 1870 shortly after Davidson celebrated his seventeenth birthin Hamden , Connecticut. Matthias Davidson had raised his son with the hopes that he would follow in his footsteps as a day. After discharging the last of the paying passengers, the civil engineer. Julian spent two years working as an apprentice Arizona passed through the newly opened Suez Canal, the first in his father&#39;s New York City office, where he was assigned American vessel to do so. She then steamed through the Indian Ocean , to Singapore and then on to Hong Kong and Japan . tasks relating to surveying and drafting, yet he seems to have Davidson then sailed to San Francisco, crossed over the Isspent more time sketching naval vessels in action or the ships thmus of Panama and returned by ship to New York. in New York Harbor than working on construction drawings. The Battle of Lake Champlain was fought on 11 September 1814 in Plattsburgh Bay. The American commander, Thomas Macdonough , had anchored his fleet across the mouth of Plattsburgh Bay and as the British sailed into the bay, they came under heavy fire. The battle was a bloody encounter, but the day went to Macdonough and the Americans. This loss dashed British hopes for victory over their former colonies, and the peace talks were renewed . The Treaty of Ghent was

signed on Christmas Eve 1814. Davidson depicts the ships as closer together than they really were, some having been as much as half a mile apart . He also shows some architectural details that the ships did not possess. Nevertheless, this work is considered the best painting of this important American naval battle. (Oil on canvas, 36&quot; x 9(J&#39;) Courtesy Key Bank, NA.