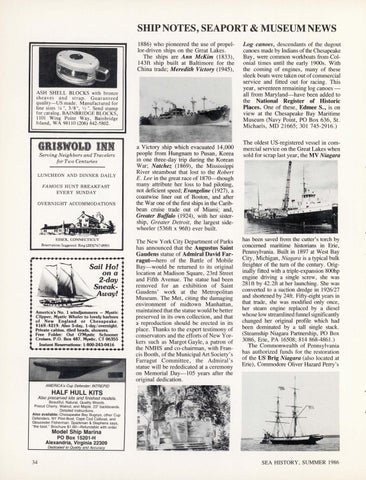 SHIP NOTES, SEAPORT &amp; MUSEUM NEWS 1886) who pioneered the use of propellor-driven ships on the Great Lakes . The ships are Ann McKim (1833), 143ft ship built at Baltimore for the China trade; Meredith Victory (1945),

a Victory ship which evacuated 14,000 people from Hungnam to Pusan, Korea in one three-day trip during the Korean War; Natchez (1869) , the Mississippi River steamboat that lost to the Robert E. Lee in the great race of 187~though many attribute her loss to bad piloting, not deficient speed; Evangeline (1927) , a coastwise liner out of Boston, and after the War one of the first ships in the Caribbean cruise trade out of Miami; and, Greater Buffalo (1924), with her sistership, Greater Detroit, the largest sidewheeler (536ft x 96ft) ever built. The New York City Department of Parks has announced that the Augustus Saint Gaudens statue of Admiral David Farragut-hero of the Battle of Mobile Bay-would be returned to its original location at Madison Square, 23rd Street and Fifth Avenue. The statue had been removed for an exhibition of Saint Gaudens&#39; work at the Metropolitan Museum. The Met, citing the damaging environment of midtown Manhattan , maintained that the statue would be better preserved in its own collection, and that a reproduction should be erected in its place. Thanks to the expert testimony of conservators and the efforts of New Yorkers such as Margot Gayle, a patron of the NMHS and co-chairman, with Francis Booth, of the Municipal Art Society&#39;s Farragut Committee, the Admiral&#39;s statue will be rededicated at a ceremony on Memorial Day-105 years after the original dedication .

Log canoes, descendants of the dugout canoes made by Indians of the Chesapeake Bay , were common workboats from Colonial times until the early 1900s. With the coming of engines, many of these sleek boats were taken out of commercial service and fitted out for racing. This year, seventeen remaining log canoes all from Maryland-have been added to the National Register of Historic Places. One of these, Edmee S., is on view at the Chesapeake Bay Maritime Museum (Navy Point, PO Box 636, St. Michaels, MD 21665; 301 745-2916 .) The oldest US-registered vessel in commercial service on the Great Lakes when sold for scrap last year, the MV Niagara

has been saved from the cutter&#39;s torch by concerned maritime historians in Erie, Pennsylvania. Built in 1897 at West Bay City, Michigan, Niagara is a typical bulk freighter of the turn of the century. Originally fitted with a triple-expansion 800hp engine driving a single screw , she was 281ft by 42.2ft at her launching. She was converted to a suction dredge in 1926/27 and shortened by 24ft. Fifty-eight years in that trade , she was modified only once, her steam engine replaced by a diesel whose low streamlined funnel significantly changed her original profile which had been dominated by a tall single stack. (Steamship Niagara Partnership, PO Box 3086, Erie, PA 16508; 814 868-4861.) The Commonwealth of Pennsylvania has authorized funds for the restoration of the US Brig Niagara (also located at Erie), Commodore Oliver Hazard Perry&#39;s