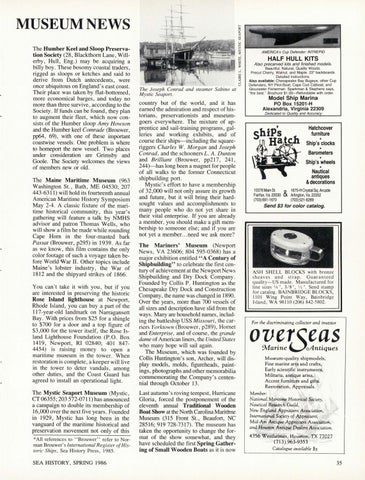 MUSEUM NEWS The Humber Keel and Sloop Preservation Society (28, Blackthorn Lane, Willerby, Hull , Eng .) may be acquiring a billy boy. These bosomy coastal traders, rigged as sloops or ketches and said to derive from Dutch antecedents , were once ubiquitous on England's east coast. Their place was taken by flat-bottomed, more economical barges, and today no more than three survive, according to the Society . If funds can be found , they plan to augment their fleet, which now consists of the Humber sloop Amy Howson and the Humber keel Comrade (Brouwer, pp64, 69), with one of these important coastwise vessels. One problem is where to homeport the new vessel. Two places under consideration are Grimsby and Goole. The Society welcomes the views of members new or old. The Maine Maritime Museum (963 Washington St. , Bath, ME 04530; 207 443-6311) will hold its fourteenth annual American Maritime History Symposium May 2-4. A classic fixture of the maritime historical community, this year's gathering will feature a talk by NMHS advisor and patron Thomas Wells, who will show a film he made while rounding Cape Hom in the four-masted bark Passat (Brouwer, p295) in 1939. As far as we know, this film contains the only color footage of such a voyage taken before World War II. Other topics include Maine's lobster industry, the War of 1812 and the shipyard strikes of 1866. You can't take it with you, but if you are interested in preserving the historic Rose Island lighthouse at Newport, Rhode Island, you can buy a part of the 117-year-old landmark on Narragansett Bay. With prices from $25 for a shingle to $700 for a door and a top figure of $3,000 for the tower itself, the Rose Island Lighthouse Foundation (P.O. Box 1419 , Newport, RI 02840; 401 8474454) is raising money to open a maritime museum in the tower. When restoration is complete, a keeper will live in the tower to deter vandals, among other duties, and the Coast Guard has agreed to install an operational light. The Mystic Seaport Museum (Mystic, CT 06355; 203 572-0711) has announced a campaign to double its membership of 16,000 over the next five years . Founded in 1929 , Mystic has long been in the vanguard of the maritime historical and preservation movement not only of this *All re ferences to "Brouwer" refer to Norman Brouwer's International Register ofHistoric Ships , Sea History Press, 1985 .

country but of the world , and it has earned the admiration and respect of historians, preservationists and museumgoers everywhere. The mixture of apprentice and sail-training programs, galleries and working exhibits, and of course their ships-including the squareriggers Charles W. Morgan and Joseph Conrad, and the schooners L . A. Dunton and Brilliant (Brouwer, pp217 , 241, 244)-has long been a magnet for people of all walks to the former Connecticut shipbuilding port. Mystic's effort to have a membership of 32,000 will not only assure its growth and future, but it will bring their hardsought values and accomplishments to many people who do not yet share in their vital enterprise. If you are already a member, you should make a gift membership to someone else; and if you are not yet a member. .. need we ask more? The Mariners' Museum (Newport News, VA 23606; 804 595-0368) has a major exhibition entitled ''A Century of Shipbuilding" to celebrate the first century of achievement at the Newport News Shipbuilding and Dry Dock Company . Founded by Collis P. Huntington as the Chesapeake Dry Dock and Construction Company, the name was changed in 1890. Over the years, more than 700 vessels of all sizes and description have slid from the ways. Many are household names, including the battleship USS Missouri , the carriers Yorktown (Brouwer, p289) , Hornet and Enterprise, and of course , the grande dame of American liners, the United States who many hope will sail again . The Museum, which was founded by Collis Huntington's son, Archer, will display models, molds , figureheads, paintings, photographs and other memorabilia commemorating the Company 's centennial through October 13. Last autumn's roving tempest, Hurricane Gloria, forced the postponement of the eleventh annual Traditional Wooden Boat Show at the North Carolina Marithne Museum (315 Front St. , Beaufort, NC 28516; 919 728-7317). The museum has taken the opportunity to change the format of the show soqiewhat, and they have scheduled the first Spring Gathering of Small Wooden Boats as it is now

For the discriminating collector and investor